Neighbors are fed up with non-permitted vendors and large crowds and noise coming from the drum circle at Veteran's Plaza in Ocean Beach. 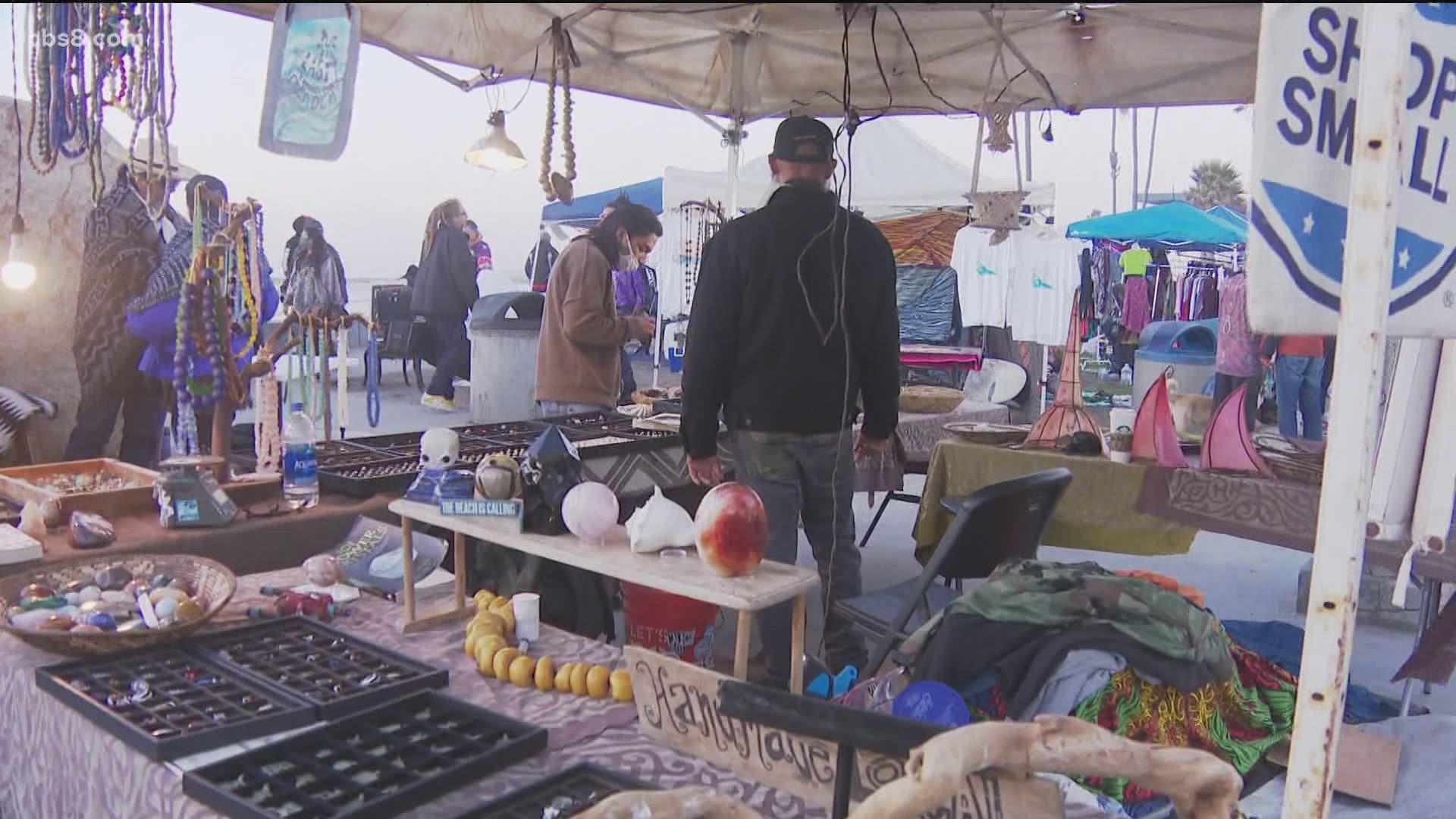 SAN DIEGO — They’re marching to the beat of their own drum and Ocean Beach neighbors are not happy about it. Last summer, the city and county stepped in after large crowds kept gathering at Veteran’s Plaza for the OB drum circle with many people not wearing masks. Six months later it’s happening again.

“When we look out we see entrepreneurship, we see people trying to make the best out of this moment,” said Corey Bruins, OB Town Council Treasurer.

But the problem is with the increasing number of non-permitted vendors, large crowds and loud music.

“It's unregulated, we're in the midst of a pandemic. There are crowds,” said Bruins, who has been vocal about what goes on at Veteran’s Plaza especially during Wednesday’s regulated farmer’s market.

“We have a thriving beach community down the street that's regulated by our Main Street association and just didn't here in front of the beach we have a park that is not regulated and not being checked," said Bruins.

On Wednesday, there were dozens of vendors who set up shop without health and sellers permits, there was a band, not many people were wearing masks and dancing close in the drum circle.

He is a local merchant selling CBD and says he’s trying to make a living.

“There are some folks that don't have the capital at this point to pay for a $60 or $100 permit at the official farmer's market,” said Williams.

Last summer neighbors called the park activity mayhem. After an outcry, city and county leaders came out and enforced and educated the public and handed out masks. San Diego police broke up the crowds after 10 p.m. and issued tickets for drugs and alcohol but that was short lived.

“We have seen very little help from the city and county in terms of regulating specifically the vendors but also the music,” said Bruins.

“Our office previously worked with city and county teams to educate folks about mask wearing and social distancing. That seemed to help for a period of time, and we will request those teams be re-engaged as crowds begin to increase again,” wrote Jordan Beane, Director of Communications.

Neighbors hope something is done before the summer crowds, but still maintain the OB love.

“The vibe here is not to squash the beauty that is a thriving beach community,” said Bruins.

“We are now working with our new mayor, Todd Gloria, and his team to address the vendor issue. This issue presents differently in OB/D2 as there are weekly clustering that does not challenge other communities the same way, especially in OB and MB.

The goal is finding the balance between protecting entrepreneurship and individual's livelihoods while also protecting open park space for regular use by families and other visitors. We will continue to seek assistance from the Mayor and county to help us mitigate the crowds to keep everyone safe and remind folks to do their part to keep our community safe."

San Diego Police e-mailed a response, "SDPD will be enforcing the usual things like, open containers, dogs off leash, smoking on the beach, etc… some of the more common things we see out there.  We will also continue to respond to citizen complaints and radio calls as usual.  As for anything related to COVID, we will educate the community and make sure they understand the guidelines."

1/1 The large crowds and illegal street vendors are back in OB. Neighbors are fed up with vendors taking over Veteran’s Plaza and concerned about he large gathering in the drum circle pic.twitter.com/i0PEvg5uOT