Video of the Tuesday incident was captured on a witness' cellphone and shared on social media, according to Oceanside Police Department Chief Frank McCoy. 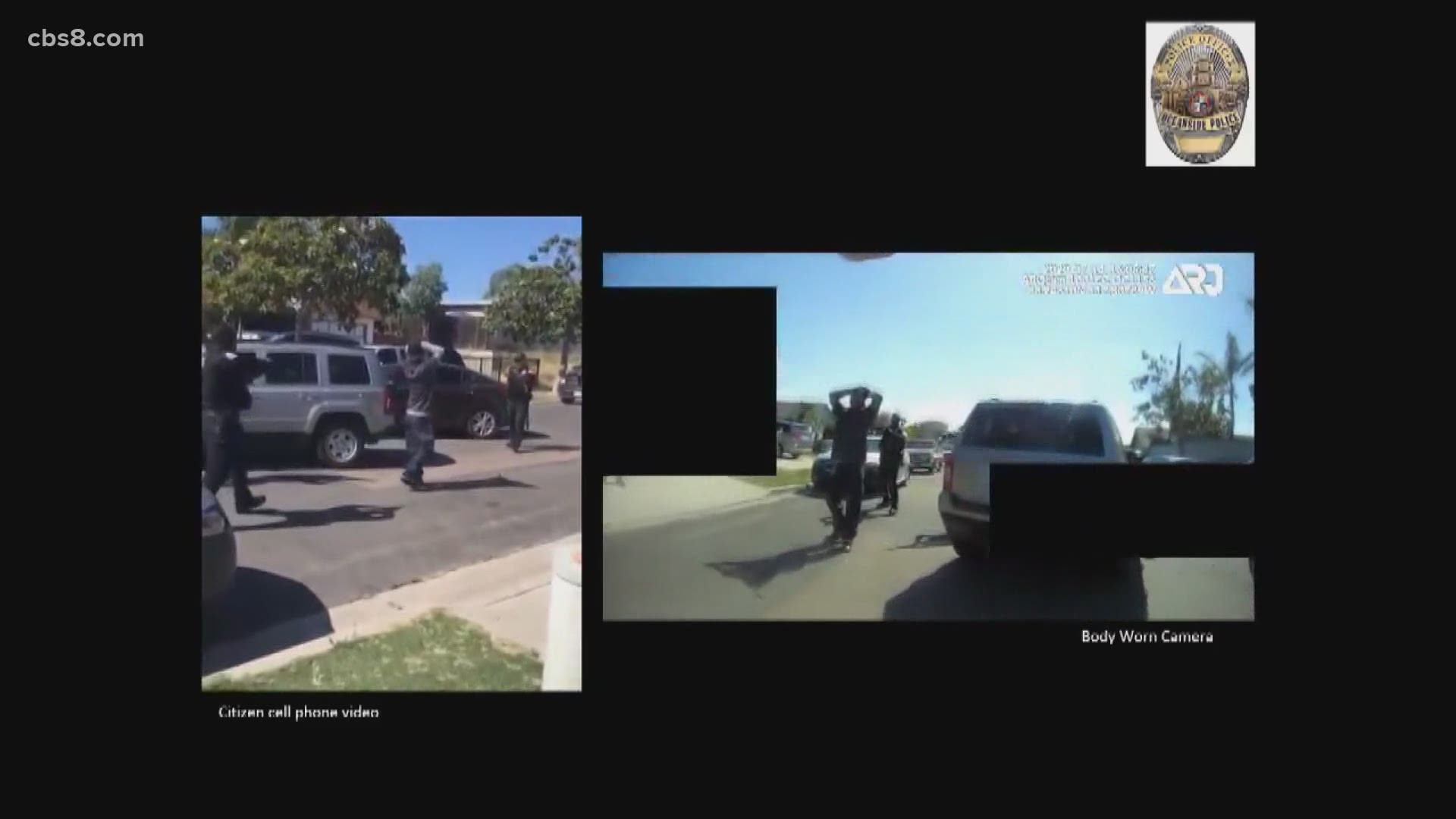 SAN DIEGO — WARNING: The video below contains content and language that may be unsuitable for young audiences. Viewer discretion is advised.

Oceanside's police chief has called for an internal investigation into an arrest in which one officer used a stun gun to subdue a carjacking suspect, causing him to fall backward onto his head, before two other officers forcefully twisted him to lie facedown.

Video of the Tuesday incident was captured on a witness' cellphone and shared on social media, according to Oceanside Police Department Chief Frank McCoy.

Police officials Wednesday released an officer's body-worn camera footage of the arrest along with the cellphone video, plus an open letter by McCoy providing more details.

**DISCLAIMER - THE VIDEO BELOW CONTAINS CONTENT THAT MAY BE UNSUITABLE FOR YOUNG AUDIENCES. VIEWER DISCRETION IS ADVISED**

Please follow the link below to read a message from Chief McCoy concerning the incident in the video.https://t.co/JaOD7MHnJN pic.twitter.com/lTRNaEfs8B

Dispatchers received reports around 4 p.m. Tuesday that the man attempted to carjack several people at multiple locations in Oceanside's Mesa Margarita neighborhood while armed with a knife, McCoy wrote in the letter. One victim told police the man had punched him several times and slashed his hand with the knife.

Another victim reported being chased by the suspect, then the victim abandoned his vehicle and fled into his home before he saw the suspect steal his vehicle, McCoy said. That victim went back outside a short time later and saw the suspect fighting with another person down the street.

The man was still armed with the knife when officers approached him Tuesday afternoon at an undisclosed location in the Mesa Margarita neighborhood, McCoy said.

The officers on scene were armed with two types of less-lethal weapons as they approached, according to McCoy.

Oceanside Police Dept. public information officer Tom Bussey said the taser as the use of force seemed most appropriate to take the suspect into custody.

“He had the knife on the ground as you can see in the video, he kicked that knife and then he was walking towards the knife when he was told to stop, what people don't see in this video, was that he was also wearing a dagger around his neck,” Bussey said.

North County activist Yusef Miller said although he still has some questions about the controversial arrest, he feels the rapid release of footage helps to instill community confidence in police.

"I'm very happy and excited that footage is coming out quicker now, more rapid for the community, I'm not here to say that every use of force by law enforcement is wrong, but we demand equity, we demand humane treatment for even the worse of suspects,” Miller said.

In the videos released by OPD, the man appears to have dropped the knife to the ground and has both hands on his head as one officer approaches from the front and two approach from behind. The man appears to kick something on the ground -- possibly the knife he had dropped -- and then takes a few steps toward it while shouting at the officers.

As this was happening, the officer in front of him can be seen taking several steps toward the man before using his stun gun. The man goes stiff and groans as he falls backward, hitting his head on the ground.

The two officers behind him then rush in and grab him before forcefully turning him over onto his stomach. In the videos, it appears the man's face hits the ground as officers turn him, and he groans again.

Paramedics treated the man at the scene before taking him to Tri-City Medical Center for treatment of undisclosed injuries, McCoy said.

The man, identified as 32-year-old David Hernandez Avila, was booked into the Vista Detention Facility around 9:30 p.m. Tuesday on suspicion of felony carjacking, attempted carjacking and assault with a deadly weapon, among other charges, according to jail records. He was being held in lieu of $1 million bail pending his arraignment, scheduled for July 31.

"I have had the opportunity to view this video and it has raised concerns with me," McCoy wrote in his letter. "I have asked our Professional Standards Unit to conduct a thorough investigation into this matter."