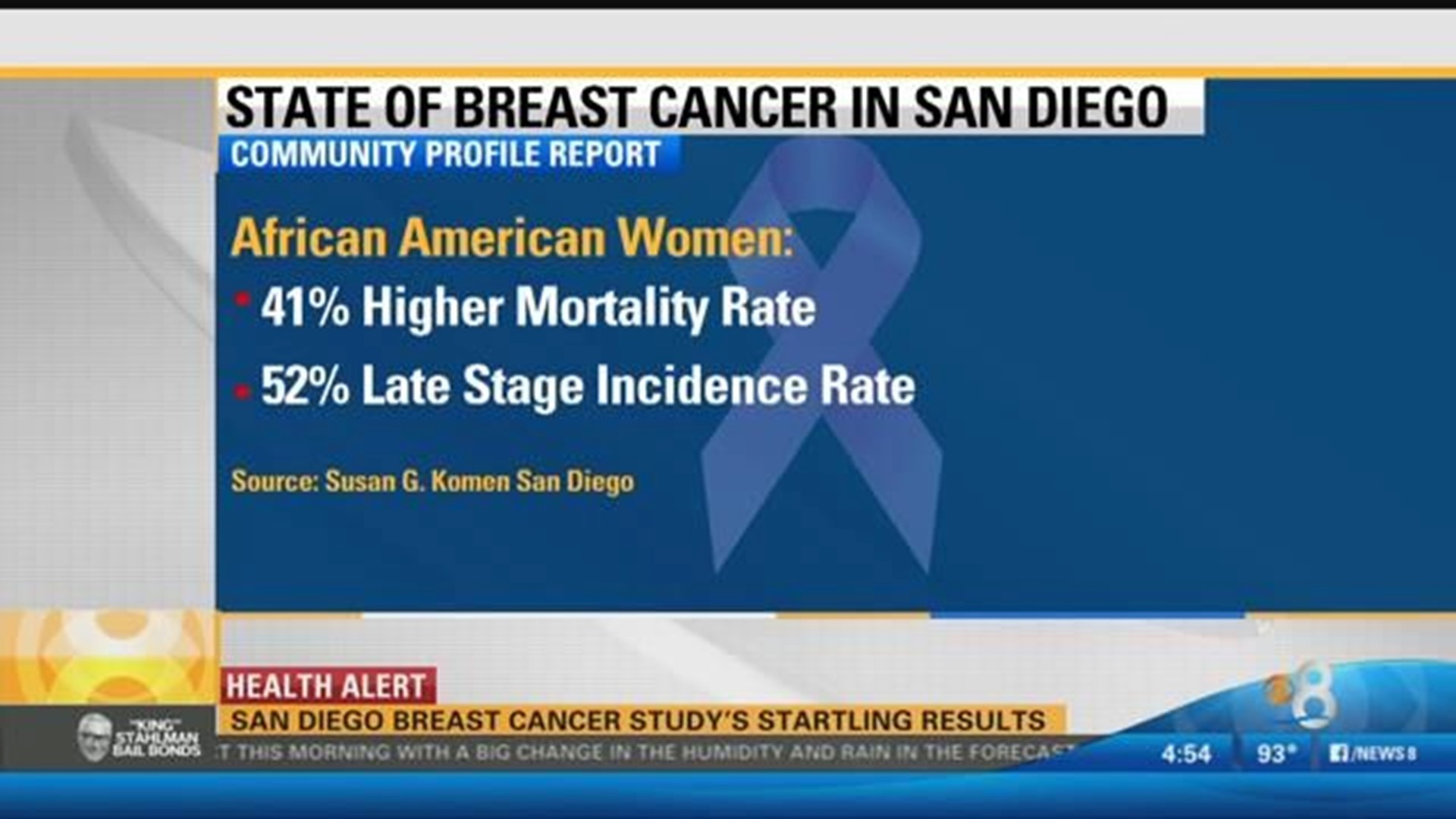 The new Susan G. Komen San Diego's Community Profile Report took an in-depth look at who had been diagnosed, their progress, where they live, their income, and ethnicity. The report's results were surprising and are prompting change.

Wendy Shureld, 46, signed up for a free mammogram through Susan G. Komen San Diego and it helped save her life two years ago.

"I am really, really grateful," Shureld said and now she is conducting outreach to keep African-American women alive, which is a group dying from breast cancer at an alarming rate.

"The shocking statistic of this particular report, is that while African-American women are less frequently diagnosed with breast cancer, in San Diego, they're more frequently dying," continued Sherman.

The new report revealed African-American women in San Diego have a 41 percent higher mortality rate than their Caucasian counterparts, and their late stage incidence rate is 52 percent.

"That means that 52 percent of all the late stage diagnosis, when your prognosis is not that good, are African-American women. That is criminal," explained Sherman.

Doctor Suzanne Afflalo added to the conversation and said low-income is not the only factor. Many who have healthcare do not want to tempt fate.

"It's unfortunate, but I am not surprised. It really has a lot to do with the cultural barriers. They are just really afraid. Once you get that word, that 'C' word ... cancer, they just look at it as a death sentence," said Dr. Afflalo.

Outreach efforts are now focusing on several communities that have the most late state diagnoses. Those communities include Escondido and San Marcos, to downtown, central, Southwest and East San Diego, and the South Bay.

"We drill into the late stage diagnosis because we know if found in its earliest stages, breast cancer has a 99 percent survival rate, but you have to catch it early," said Sherman.

Komen San Diego set up a new, state-of-the-art mobile mammography unit at Qualcomm stadium last week, offering free mammograms to those who were uninsured or under-insured. Moving forward, it will also be rolled out to grocery stores and churches.

"We are going into the community where a women shops, works, prays or plays," added Sherman.

NOTE: You can join CBS 8 in the fight against breast cancer during the month of November for the Race for the Cure on Sunday, November 1 and the 2015 San Diego 3-Day November 20 - 22.

Also, leave a message on the CBS 8 Breast Cancer Can't Stop San Diegans: Wall of Inspiration celebrating the survivors in your life or honoring your loved ones lost.