Harnessing plants to clean the air

Row after row of plants are being tested to see how much carbon dioxide they can suck out of the air. 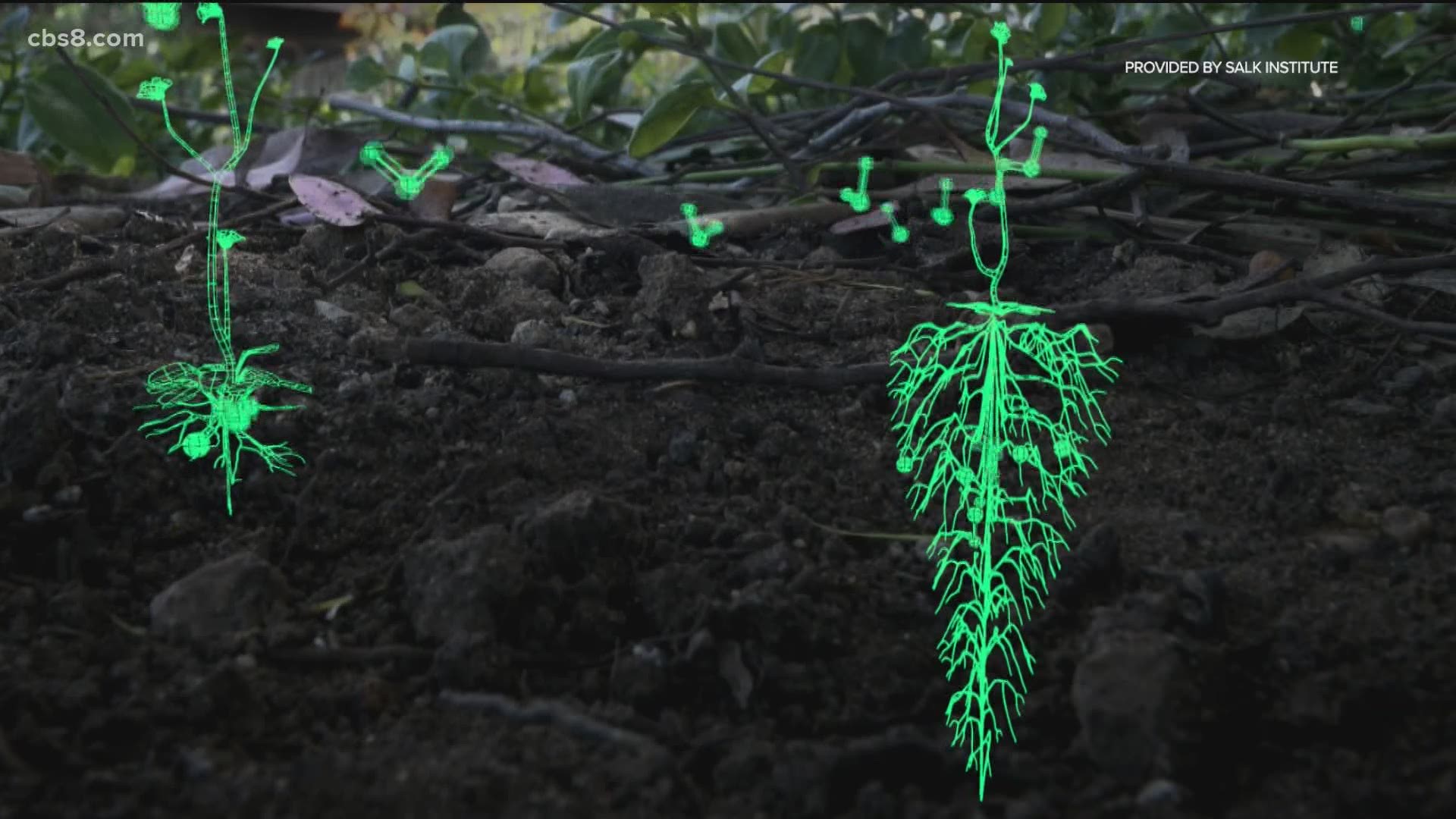 SAN DIEGO — The burning of fossil fuels sends carbon dioxide into the atmosphere and that is the leading cause of the warming of our planet. Plants help clear some of that carbon dioxide from the air. So what if scientists could harness those plants and have them clean the air even more? That’s what they’re doing at the Salk Institute and we have rare access into a greenhouse where this important research is happening.

Row after row of plants are being tested to see how much carbon dioxide they can suck out of the air.

"It’s kind of like a lab on a larger scale," Makenna Hopwood, the greenhouse operations lead, explains and adds that it all starts with a variety of seeds, the seedlings grow in the greenhouse, where researchers can see those highly desired, highly effective roots.

It’s those roots researchers are counting on to take carbon out of our atmosphere and sequester it deep into the soil.

“I hope to save the world, right? That’s the goal! So I’d love to come up with the concept in the amount of time we have,” Hopwood says.

The idea behind the Salk Institute’s Harnessing Plants Initiative is to change the roots of plants.

“The three goals are deeper roots, more roots, and more carbon in the root system,” according to Hopwood.

They are mainly focusing on crops like corn, wheat, rice, soybean, canola, and sorghum.

With the hopes that one day, the vast fields of agriculture across the planet not only supply our world with food but those crops will also clean up our act.

“Crops are some of the most prevalent plants on this planet, because there are millions of farmers all over the world who cultivate crops. So if you use a few crops [and they’re] better at storing carbon for longer you’d have an enormous impact," said Wolfgang Busch a plant biologist and professor at the Salk Institute.

"It takes a while for society to go away from fossil fuels and that is super important, but we already have unsafe levels of carbon dioxide in the atmosphere and we need to drive it down.”

Right now, they are testing out various soybean seeds in a San Diego-area greenhouse to come up with the right concoction of seeds that would make roots grow deeper into the soil, and roots that would last longer, all to capture the most carbon possible.

“The leaves are very important, they are carbon-capture devices so we are thinking the roots are carbon-storage devices,” explained Professor Busch.

This is something that has the full support from renowned scientist and global climate leader Dr. Veerabhadran Ramanathan at Scripps Institution of Oceanography.

“Salk Institute has a way to coax the roots and do what I call, make them fatter," said Dr. Ramanathan

Dr. Ramanathan points out one trillion tons of C02 have spewed into our atmosphere and we would need to clear out at least half that, which is 500 billion tons in the next 40 years.

“Mother Nature already takes the carbon out of air, the 25% of junk we dumped in it already, otherwise there would’ve been a catastrophic problem already,” said Dr. Ramanathan.

And for those who study plants, they recognize plants have figured out how to protect our planet, so why not harness that natural power to further clear our air.

In the past couple years the Salk Institute’s Harnessing Plants Initiative has received a few grants totaling over $80 million. They have another three years to test out different types of seeds. The goal is for farmers around the world to plant the carbon-clearing crops.