PG&E estimated that between 150 to 200 of fires occur every year because of balloons getting tangled up in powerlines. 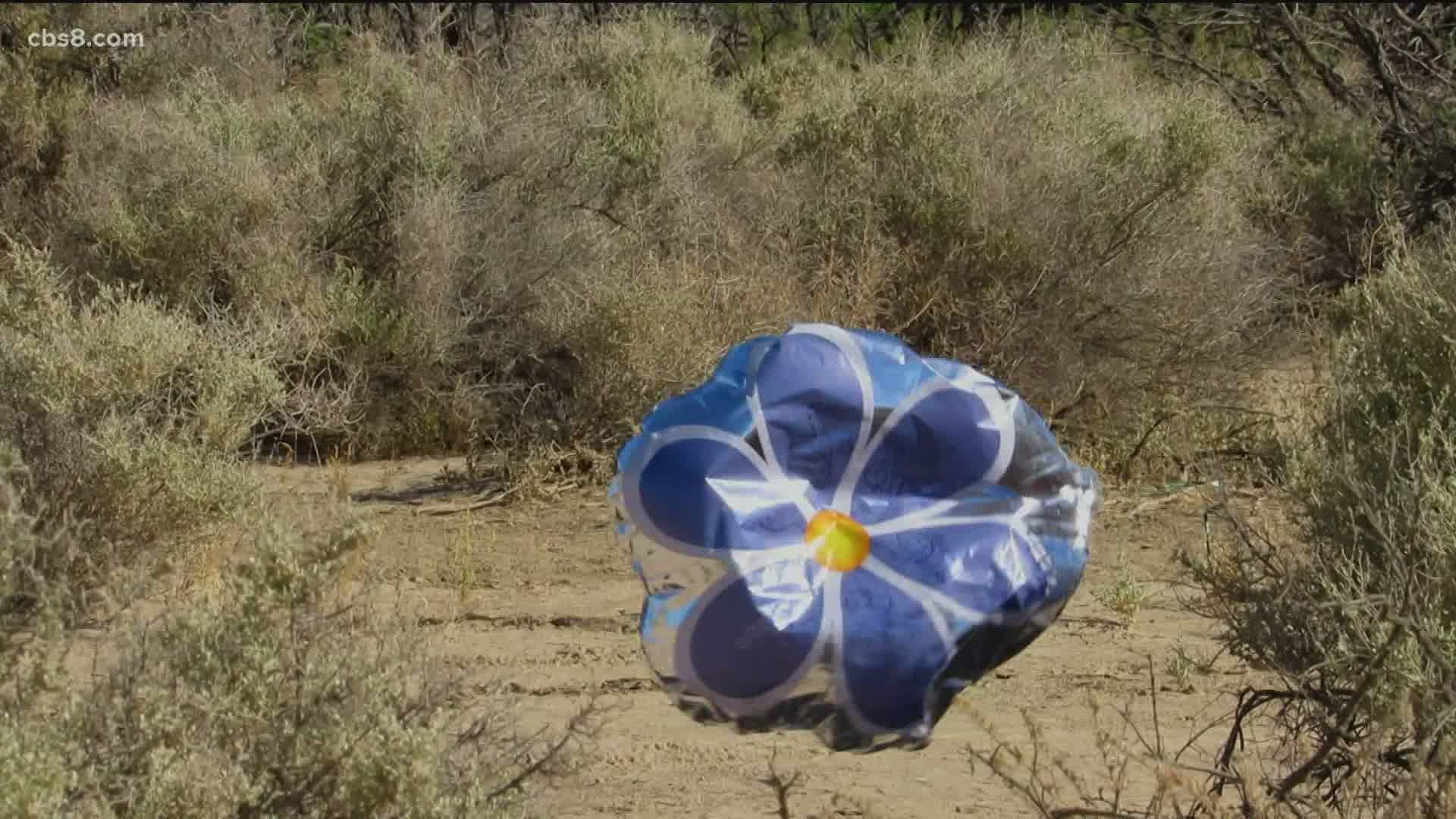 SAN DIEGO COUNTY, Calif. — Everyone loves a good party or celebration! But, before you release the balloons into the air, you should think to yourself, where does it land? Well, that presents an environmental hazard for the eastern portion of San Diego County.

"They just slowly descend; you see a little balloon and it just descends in the desert...one time I saw a huge clump, must have been twelve, a dozen, two dozen balloons, and I just took the camera and recorded it," said Sicco Roods.

Roods is a Staff Research Associate at the Steele/Burnand Anza-Borrego Desert Research Center in Borrego Springs. My photographer and I ventured over 70 miles to see this shiny problem ourselves. Roods said he and local residents see mylar balloons littering the desert all year round.

"I see them every week. I pick them up when I am doing fieldwork. I see them when I am walking the dogs out here in the desert, in the open landscape," said Roods. "I see them on my hikes and so do all the other hikers that come out here. It's a very well-known problem for the local hiking people and just the locals here generally."

Roods said up to eight to 10 mylar balloons can be found on one hike. We even spotted one on a mini-hike through the desert.

"Here's an example. And they get stuck in these cacti and shred into little pieces, microplastics and can be harmful to wildlife," said Roods.

This colorful, festive litter has been harmful to the wildlife including desert tortoises.

"Potentially get ingested by animals and, just in general, litter the landscape and these ribbons, you know, same thing, they can get tangled up in animals' feet and paws and also their throats and they can't eat anymore," said Roods.

The light nature of helium gas allows this environmental hazard to be picked up by our prevailing westerly winds. Eventually, it deflates in the desert. But, this is also a major concern when it comes to wildfires in our state.

According to Roods, PG&E estimated that between 150 to 200 of these fires occur every year because of balloons getting tangled up in powerlines because they have metallic content. This is alarming considering the number of mylar balloons found in the San Diego County desert, which is naturally prone to dry and gusty conditions. These weather elements only become more intense for this region when west winds pick up and elevate fire weather concerns for this part of San Diego.

Since balloon releases are a year-round phenomenon in San Diego County, I asked Sicco if he had any other celebratory suggestions for us.

"It's better to just do these balloons with regular air. Put them on a stick and stick them in a vase or something like that. Or you could try alternatives, blowing big bubbles or making, planting trees, doing more environmentally friendly things," suggested Roods.

There's actually a warning label on mylar balloons telling you not to release them into the air. You just have to read the fine print. So, the next time you are celebrating a special occasion, just remember to pop the balloon and then go ahead and put it in the trash can when you are done.

WATCH RELATED: The Nature of Nature: Why we need the wild (July 2020)