Despite the pandemic, forever families are being officially formed during National Adoption Month

The annual November party at Juvenile Court was canceled this year, but the joy and celebrations at home continue. 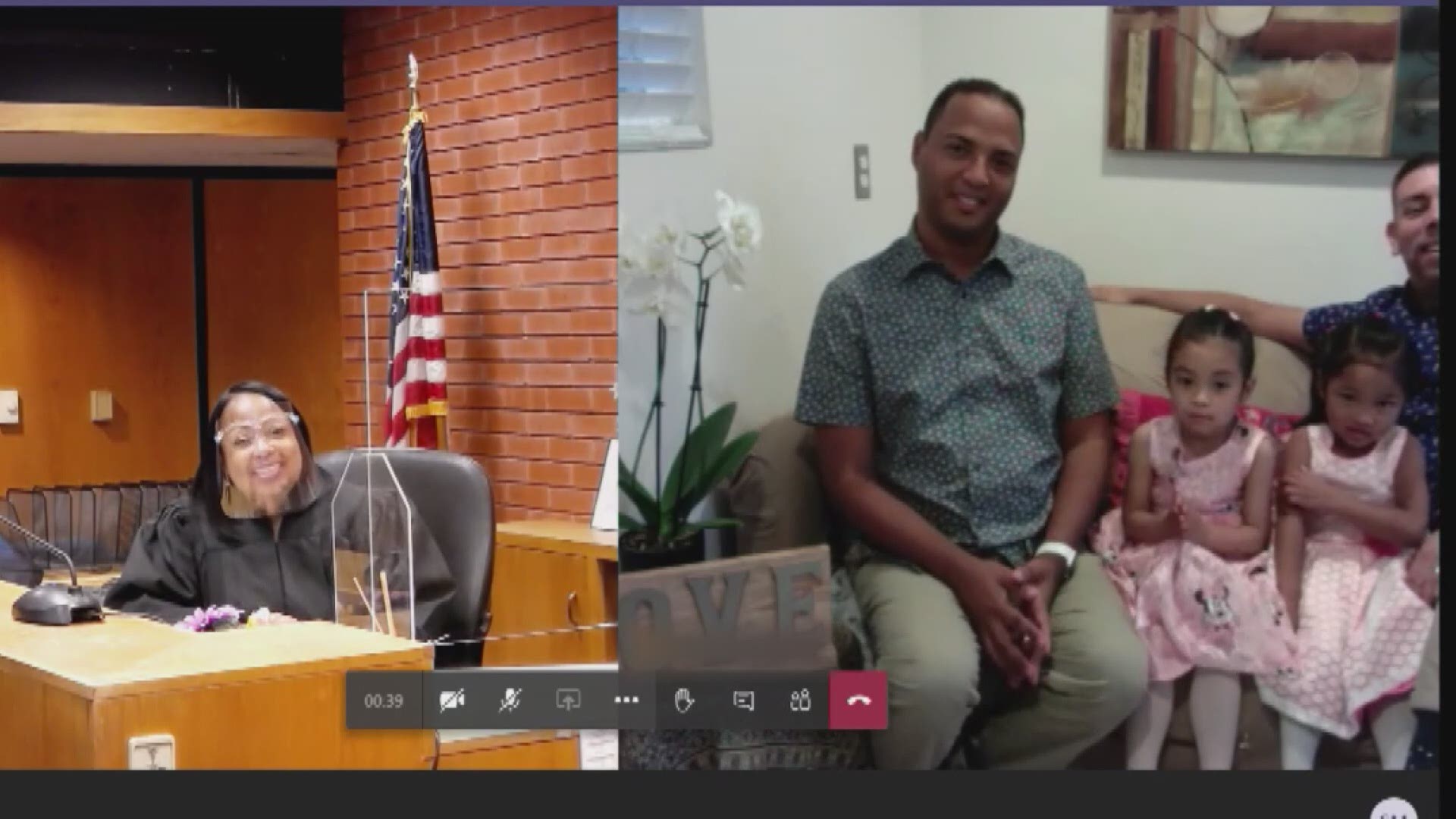 SAN DIEGO — Several local families have something extra special to be thankful for as they celebrate Thanksgiving.

November is National Adoption Month, and not even a pandemic can stop the celebration and joy.

"Good afternoon, everyone, this matter is before the court for an adoption for Angeline," said San Diego Juvenile Court Judge Tilisha Martin, as she welcomed a family of four to a virtual adoption ceremony.

"The purpose of the adoption order is for the law to legally recognize you as a family," said Judge Martin.

She then asked Angeline and her sister Leyla to help her countdown to the big moment. "Let's go, 1, 2, 3, Yes!," she said as they all clapped together, side by side on the computer screen.

"I wish you all the best of luck. Congratulations to you!," Judge Martin said to the family.

In their hearts, parents Raidel and Erick have considered themselves a family for months, but they both agree it's an extra special moment when an adoption is finalized.

"We were expecting and waiting for this moment since a long time ago", said Erick.

"You don't need papers to show love to somebody, but now it's official", he added, saying it will be so much easier to travel with the girls, now that Angeline is officially adopted.

This was a much different experience than when they adopted Leyla, who was a safe surrender baby. Reidel said they were able to bring her home as an infant and her adoption faced no legal challenges.

Both girls are four years old. The sisters are only six weeks apart, so in many ways, they're being raised like twins.

Leyla welcomed Angeline with open arms, as they hugged during our Zoom call, with Leyla saying, "I love my family."

After Leyla's adoption was complete a couple years, Reidel and Erick decided to become foster parents in order to give more children a safe place to stay. That's when they took in Angeline, for what was supposed to be a temporary stay.

"We never thought that she was going to stay with us," Reidel reflected, but now, she's a permanent part of their family. "She's here. She's not going anywhere," he said.

"It's completely a blessing and it makes things completely different than the way that we planned," said Erick.

The party was canceled this year, however, due to the pandemic.

Director of Child Welfare Services Kimberly Giardina said they're trying to make the virtual proceedings just as momentous to mark National Adoption Month. Some families choose to finalize in November, specifically so it coincides with the annual designation.

"There are some families who choose to wait, so as Judge España said, it is a big day of celebration. You can see behind me I decided to decorate to keep the celebratory theme for our families."

Over 30 families will finalize adoptions in San Diego Juvenile Court this month.

"As a juvenile court judge, one of the most rewarding parts of my job is when we establish permanency for children and youth waiting to be adopted. I am so pleased to be part of the process that brings joy to so many of our families and children," said Judge España.

Even after the pandemic, she says the court will continue to provide links to the live virtual hearings, so the adoptive families can invite family and friends around the world to join in the celebration of the finalization.