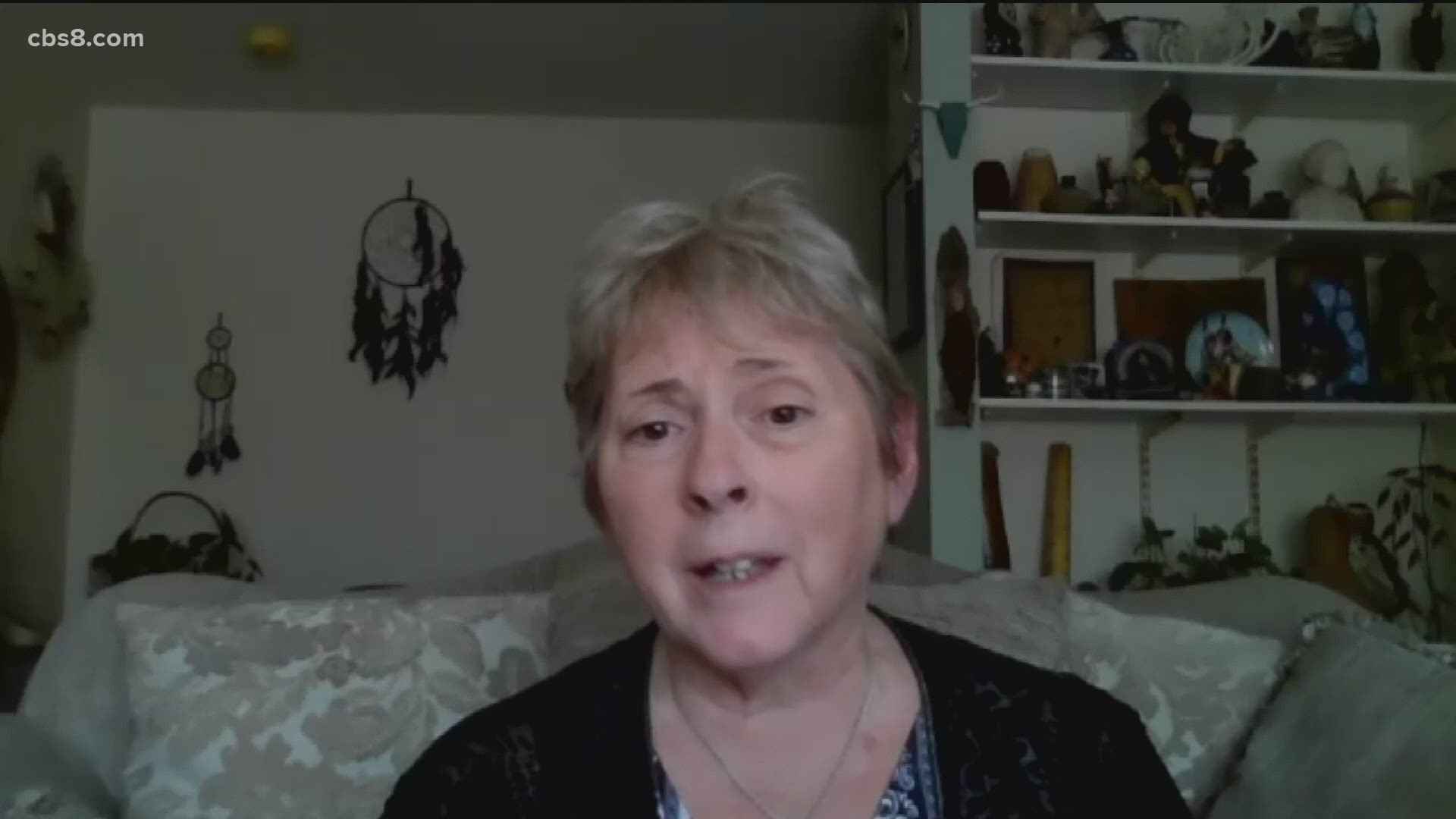 SAN DIEGO — The murder of 65-year-old Debbie Stolz hits close to home for the News 8 family.

Debbie was a foster parent who dedicated her life to helping countless children and families in San Diego County.

On Sunday, she was shot and killed, along with her daughter, 37-year-old Elizabeth Stolz, whose friends called her Lisa. Their names were made public on Tuesday.

San Diego police identified the man who murdered them as the father of Lisa's six-month-old baby. He was later found dead of a self-inflicted gunshot wound.

The devastating loss not only affects their family and friends; countless people in the San Diego County Foster and Adoptive Resource Family community are mourning her loss and trying to come to terms with the fact she is gone.

Just last week, I interviewed Debbie and several other foster parents for an upcoming Fostering Hope story on unsung heroes. My heart is breaking over the death of this incredible champion for foster children.

Debbie was the President of the San Diego County Foster Parent Association in El Cajon and had been a foster parent for 36 years, taking in dozens of foster children and also serving as a mentor to fellow foster families. She had eight children, four of whom were adopted. During the interview last Tuesday, she told me she was currently fostering three teenagers.

Debbie described how she was trying to stay positive during the challenges of the pandemic, including fewer family visits and limited time with friends, who are often considered a lifeline for teens going through the many uncertainties of foster care. During this difficult time, Debbie was determined to make things as normal as possible, continuing her tireless efforts to support foster children and families.

"Birthdays still happen, so we try to bring birthday gifts to them or make children's bags for them," Debbie explained.

When I asked about her motivation to keep going through more than three decades of fostering, she replied with a smile, "I'm not sure. I think it's just momentum, I just keep rolling along."

Debbie's impact in the community was unmatched. Organizers of Rooted in Love posted a tribute on its Facebook page, which reads in part:

"It is impossible to find the words to describe the great loss in the death of my dear friend and fellow foster mom, Debbie Stolz. She epitomized the word MOM becoming one to so many; her biological and adopted children and the countless others she lovingly cared for. She was a treasured friend of many."

"A Peacemaker with a spine of steel for any injustices to children. She delighted in all her children and was so in love with all her grandbabies who are now deprived of her.  Her loss to her family is immeasurable. She had the passion to make things better for all children in foster care but particularly for the vulnerable babies. She was the caregiver of everyone and her loss is felt so deeply."

A Facebook fundraiser has been established to help Debbie and Lisa's family. At the time of this writing, more than $11,000 of the $15,000 goal had been raised.

During the interview, Debbie expressed her concerns about the ability for the San Diego County Foster Parent Association to stay afloat during the pandemic, with rent costing approximately $3,000 per month.

"We have a reserve, but we are we will go through that pretty quickly. And if things don't start getting back to normal soon, we will have to close our doors," she said.

The group leases a building in El Cajon which is used as a training center for foster families. They also provide resources out of that location, offering free clothing and other essentials to foster children and families.

Debbie explained, since the charity is 100-percent led by volunteers, with no employees who earn any compensation, they do not qualify for any sort of small business loan. She said she would be so grateful for any donations from the community to help them survive. Now, the group is left without its leader. To make a donation in Debbie's name, click here.

As for being named an "Unsung Hero", Debbie told me she wasn't deserving of the title.

Debbie said she felt blessed to be part of their journey.

"We're just parents that are helping kids that truly are are the heroes of this whole thing-- to survive this horrible life event of having to come into foster care and come through unscathed as much as possible."

On Wednesday, Sally Cox, CEO of the Foundation for Grossmont & Cuyamaca Colleges, issued the following statement on the loss of Debbie Stolz:

You may have seen or heard news reports about two women who were murdered in Otay Mesa this weekend. I’m sad to inform you that one of the women was Deb Stolz, who worked for more than 20 years as a trainer for resource parents (the new term for foster parents) with Grossmont College’s Foster, Adoptive & Kinship Care Education Program.  Deb was a long-term employee of the Foundation for Grossmont and Cuyamaca Colleges. Most likely, you wouldn’t have seen Deb on the Grossmont College campus because she spent her time training resource parents in the community.  Deb played an integral role in the program through her training and support to countless resource parents for foster youth in San Diego County.

Deb was the single parent of eight children, four of them through adoption. Sadly, her daughter Lisa was also killed this past weekend.  Deb was the President of the San Diego County Foster Parent Association, which provides community resources to foster families.

Just a week ago, Deb was interviewed by Channel 8 about being a resource parent for foster children. 'It is so very rewarding to help a child feel safe – to have some place in the world where they feel safe and wanted,' she said. 'I love what I do.'

Grossmont College’s program for foster care education is responsible for training all the resource parents in San Diego County and is the largest of its kind in the state. Deb was an important part of that program and she will be deeply missed.

Please join me in extending condolences to Deb’s family and the children and parents who benefited from her dedication, love and support."

RELATED: Suspect in Otay Mesa double-homicide believed to be dead in Mexico