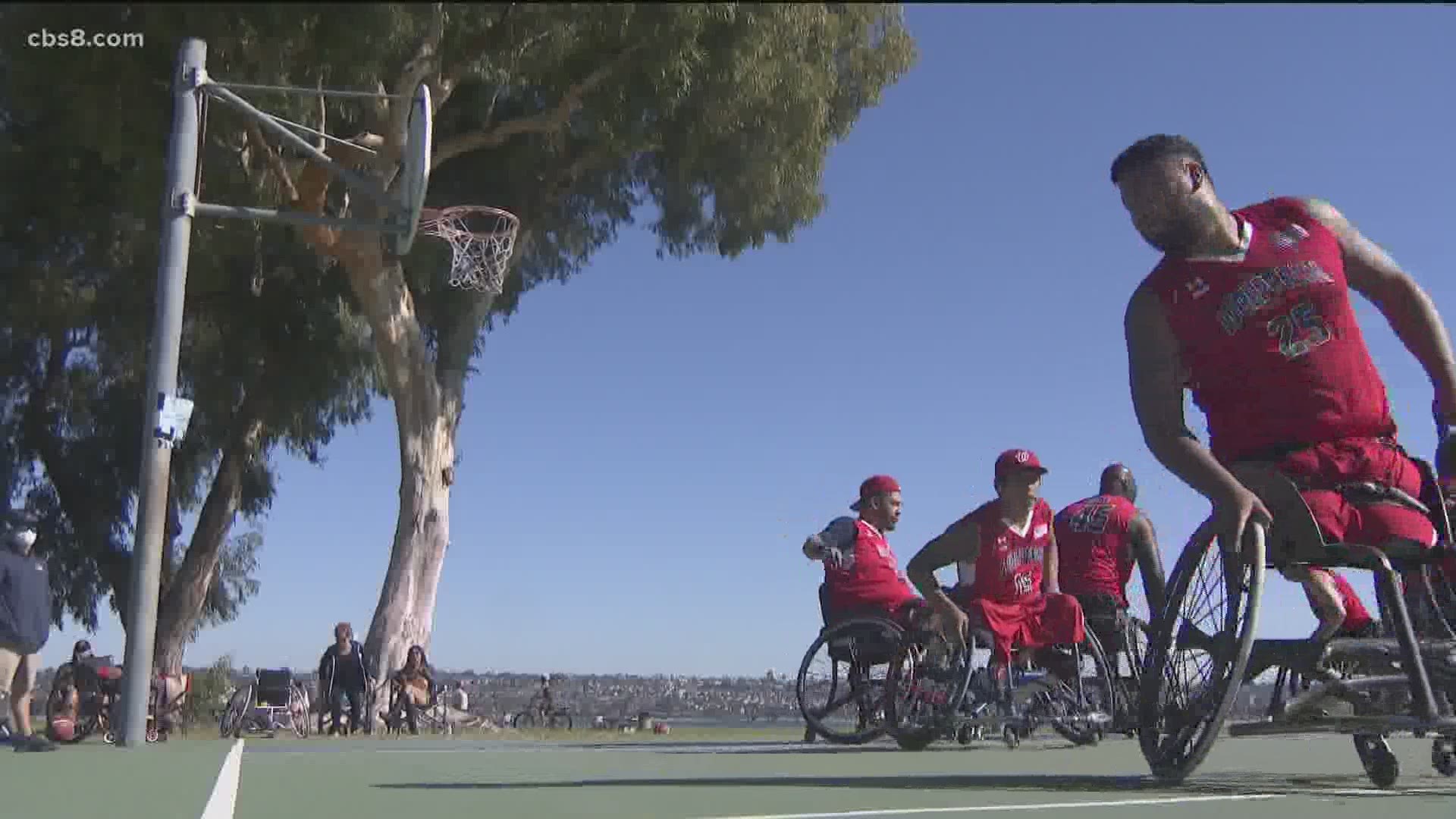 SAN DIEGO — On a blacktop court in Crown Point, the San Diego Wolfpack start their basketball practice. The squeaking of tires and the slams of wheelchairs can be heard all around the court. While these guys might not be household names yet, they belong to one of the most successful basketball teams in the city.

Though they’ve been stuck in quarantine like the rest of us, they look like they haven’t skipped a beat. With fluid passing, pin-point shooting and physical defense, it’s clear why the Wolfpack are known as one of the best wheelchair basketball teams in the country. Last season, the pack finished third in the National Wheelchair Basketball Association’s top division.

Sutton has been at the helm of the Wolfpack for the last two years. In that time he’s watched the team succeed and progress due to the drive and competitive spirit of his players.

“They’re amazing,” said Sutton. “They put their heart and souls into this game. We’re watching. We’re talking about it. We eat, sleep and breath basketball. We love it.”

The team is indeed a pack. Although they don the same red jersey, the players share a closer bond than just being teammates.

“We hang together, we eat together, we laugh together, we cry together,[and] we transition together,” said Price. “We all served in the military - Army, Navy, Marines, Air Force. That’s what makes us unique.”

Price, lost his right leg to a form of bone cancer while he was serving in the Army. Though he needed to relearn some things, losing his leg never stopped his competitive drive and his love for basketball.

“When I got diagnosed with bone cancer, I was thinking, 'am I going to be able to play basketball ever again?' I mean that was my heart, my passion, my drive," said Price.

It took him years to play at a competitive level, and even starred for the University of Alabama’s wheelchair basketball team, before playing for the Wolfpack. Coach Sutton, who doesn’t need a wheelchair, found out how hard it was to play after going up one-on-one with Wolfpack star George Salazar.

“I was like, 'oh I got him' and he just kind of gave me a little hip check and went around me,” said Sutton. “I just thought to myself, 'I’m way out of my element here.' These guys are pretty damn good.”

RELATED: Watch this athlete in a wheelchair easily scale a climbing wall

Wheelchair basketball requires intricate movements and physicality not found in any other sport, like pivot turns, stopping on a dime and cutting to the basket all while maintaining a dribble - not to mention the the slamming of chairs, the muscling below the hoop and the all the trash talk you’ll have to put up with.

“We love it, the competitiveness of it," said Price. “But once the whistle blows, that’s it. We brothers again. We’re brothers on the court, but we’re brothers off the court as well.”

These are guys who never left their competitive spirit behind and warriors whose battlefield is now the basketball court.

The Wolfpack don’t have any games scheduled and their gym in Balboa Park is closed, so we’ll be sure to keep you updated on when their season might start.

RELATED: Home of the Brave: A Vision for Warrior Foundation Freedom Station II

Be sure to catch my story on The San Diego Wolfpack wheelchair basketball team this Thursday at 6pm. It was a pleasure to tell their story! @CBS8 pic.twitter.com/BOaiCa03Tv