The clouds of jumpers, with ’chutes akin to those used by D-Day soldiers, were honoring the thousands of paratroopers who leapt into gunfire and death 75 years ago. 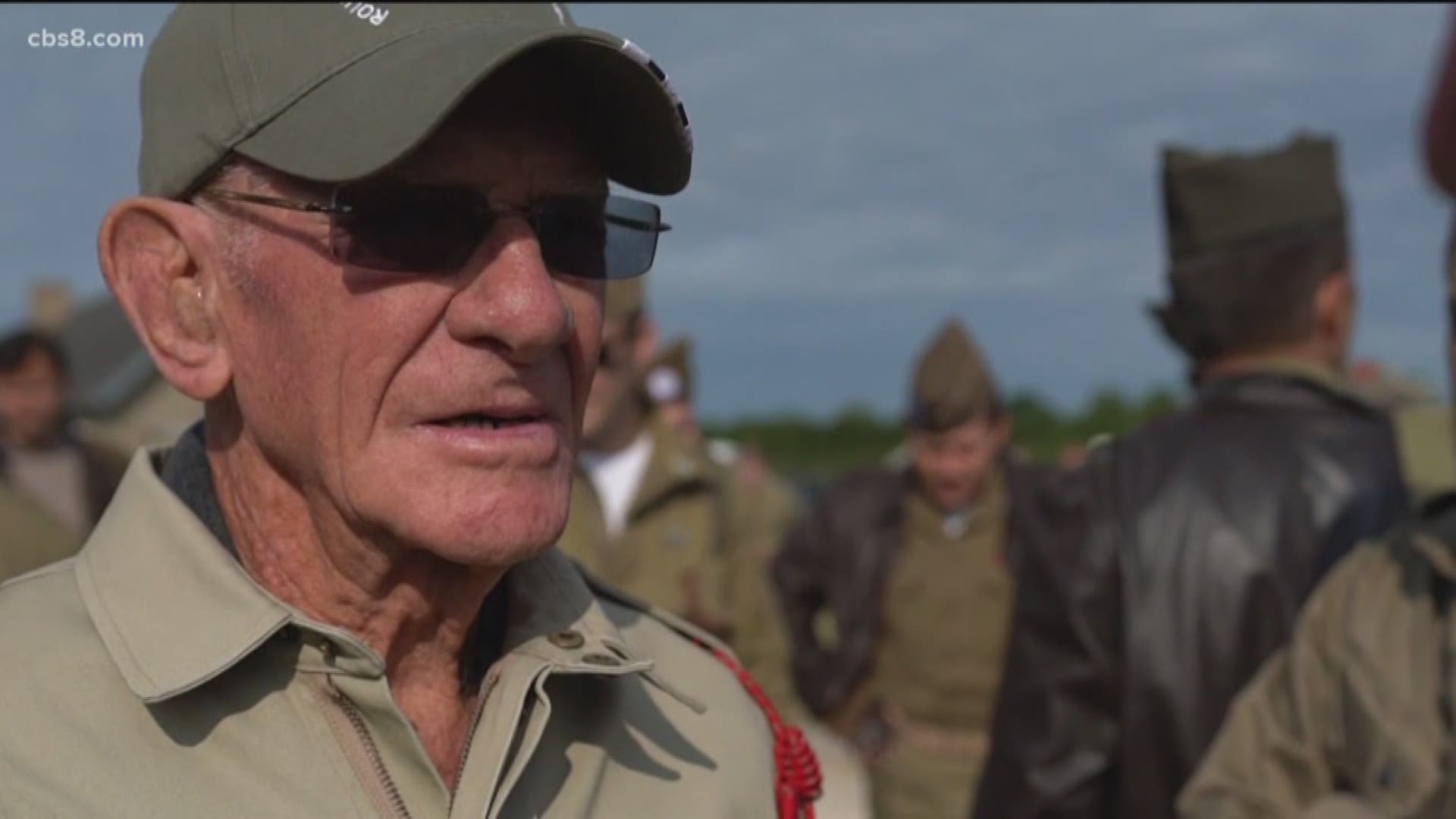 CARENTAN, France — No murderous hails of gunfire this time. No D-Day objective that had to be taken, whatever the cost. This time, 75 years almost to the hour after he parachuted into Nazi-occupied France, Tom Rice again found himself floating down through Normandy’s skies, now a grizzled 97-year-old thrilled as a little kid.

“Woo-hoo!” the ex-paratrooper yelped after hitting the ground, carrying the memories of comrades lost in battle and on a new mission — of remembrance this time — for the ever-shrinking numbers who sacrificed so much in World War II.

Engines throbbing, C-47 transport planes dropped string after string of parachutists, a couple of hundred in all - including Rice, who jumped strapped to a partner, not alone and laden with weapons as he did on June 6, 1944.

“It went perfect, perfect jump,” Rice said after catching his breath. “I feel great. I’d go up and do it all again.”

The 97-year-old trained for six months at CrossFit Coronado.

“He looks younger in the plane,” said Coach Johanna Evans who watched video of his jump. Rice’s trainer, Clint Russell, flew to Normandy for the jump but back home his coaches were cheering him on. He trained on mobility and flexibility. 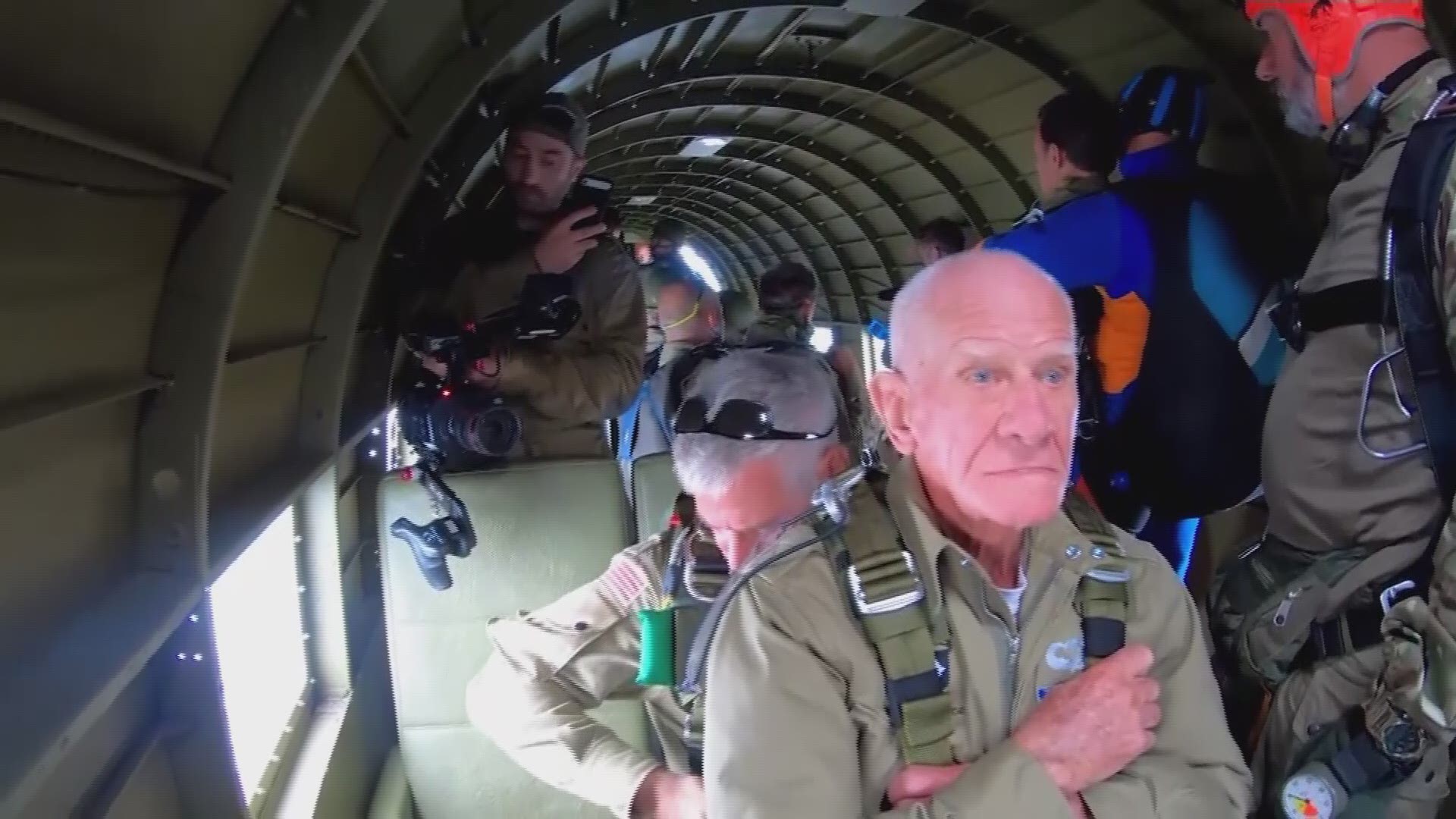 “He was impressed that he was able to climb the staircase easier pick up keys easier,” said Evans.

The clouds of jumpers, with round ’chutes akin to those used by D-Day soldiers, were honoring the thousands of paratroopers who leapt into gunfire and death 75 years ago.

Their landing zone Wednesday was fields of wildflowers outside Carentan, one of the targets of the airborne forces that were dropped in darkness on perilous missions to take strategic objectives and disrupt German defenses so that the greatest amphibious invasion in history, on the D-Day beaches, would have a greater chance of success.

Rice, of San Diego, jumped into roughly the same area he landed in on D-Day. He said it was dark in 1944 when he hit the ground in hostile territory and he can’t be sure exactly where he was.

Credit: AP
Parachutists jump from C-47 transport planes in Carentan, Normandy, France, Wednesday, June 5, 2019. Approximately 200 parachutists participated in the jump over Normandy on Wednesday, replicating a jump made by U.S. soldiers on June 6, 1944 as a prelude to the seaborne invasions on D-Day. (AP Photo/Rafael Yaghobzadeh)

Rice jumped with the U.S. Army’s 101st Airborne Division on that momentous day 75 years ago, landing safely despite catching himself on the exit and a bullet striking his parachute. He called the 1944 jump “the worst jump I ever had.”

“I got my left armpit caught in the lower left hand corner of the door so I swung out, came back and hit the side of the aircraft, swung out again and came back, and I just tried to straighten my arm out and I got free,” he told The Associated Press in an interview.

His jump on Wednesday was an altogether different story. Still buff and sprightly, and having prepared for six months with a physical trainer, Rice swooped down with an American flag fluttering beneath him and landed to a wave of applause from the crowd of thousands that gathered to watch the aerial display.

Evans says as word grew, Rice was receiving a lot of attention not only for being 97 years old and doing CrossFit but also jumping for the anniversary.

“[he was] very humbled that people would want to tell his story,” said Evans.

Other parachutists jumped with World War II souvenirs, some carrying items their grandfathers took into battle. Many spectators wore war-era uniforms, and music of the time played over loudspeakers.

Robert Schaefer, a retired lieutenant colonel with the U.S. Army’s Green Berets who served in Afghanistan, carried whiskey, cigars and the dog tag and wallet his grandfather, George J. Ehmet, had with him when he fought as an artillery man in France.

“I feel like I got to jump with my grandpa,” Schaefer said afterward.

British parachutists jumped later Wednesday en masse over Sannerville. D-Day veterans were expected to be among them. The jumps were part of events marking the 75th anniversary of the D-Day invasion.

Asked how his D-Day comrades would have felt about him jumping, Rice said, “They would love it.”

“Some of them couldn’t handle it. Many of them are deceased. We had 38% casualties,” he said.

Like many other veterans, he said he remains troubled by the war.

“All the GIs suffer from same blame and shame,” Rice said. “It bothers us all the time for what we did. We did a lot of destruction, damage. And we chased the Germans out, and coming back here is a matter of closure. You can close the issue now,” he said.