He is being charged by both federal and state prosecutors and faces a possible death sentence in both cases. 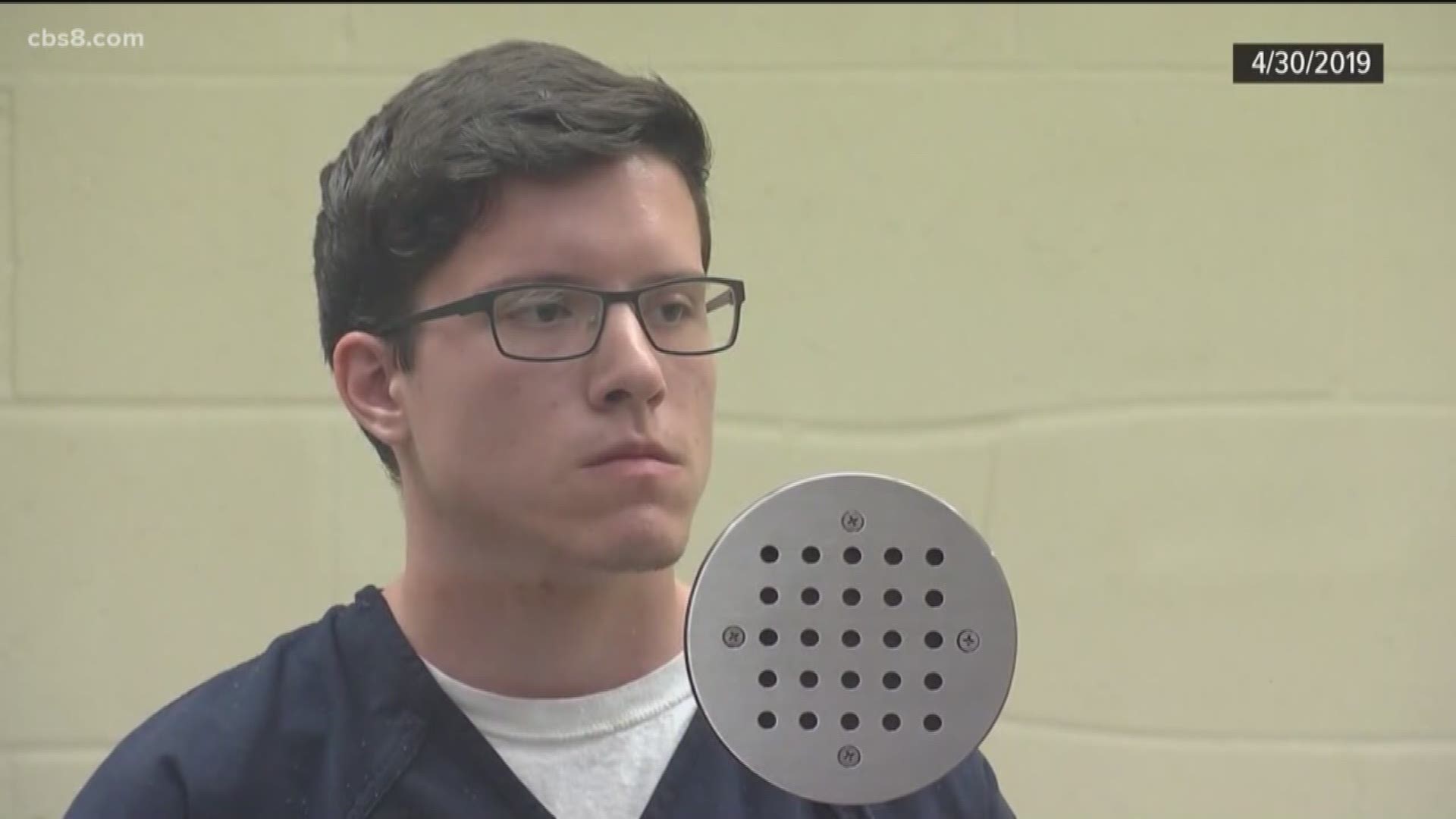 A 19-year-old nursing student accused of opening fire during a Passover service at a Poway synagogue last month, killing one congregant and injuring several others, as well as the alleged arson of an Escondido mosque, appeared Tuesday before a U.S. magistrate judge and pleaded not guilty to a 113-count grand jury indictment.

John T. Earnest of Rancho Penasquitos is being prosecuted in federal and state court in separate but simultaneous cases stemming from the April 27 shooting rampage at Chabad of Poway and the March 24 arson blaze at the Dar-ul- Arqam Mosque, also known as the Islamic Center of Escondido.

Earnest's parents watched this afternoon's proceedings from a packed courtroom gallery and did not speak to reporters afterward. They previously publicly condemned their son's alleged actions and said they would not pay for his defense.

He is being charged by both federal and state prosecutors and faces a possible death sentence in both cases. Neither office has made a decision regarding whether to pursue the death penalty.

The defendant is accused of carrying out the shooting on the last day of Passover, killing Lori Gilbert Kaye, 60, who was shot twice in the synagogue's foyer and died at a hospital.

Authorities said Earnest, who lived with his parents and was studying nursing at Cal State San Marcos, confessed to both the shooting and the arson fire in an online manifesto posted prior to the synagogue shooting.

The federal indictment handed down a week ago added four counts of using and carrying a firearm during and in relation to a crime of violence, which were not included in the original federal complaint filed against Earnest earlier this month.

He faces 113 federal counts total, which includes the four new counts, 54 counts of obstruction of free exercise of religious beliefs using a dangerous weapon, resulting in death, bodily injury and attempts to kill; 54 counts of hate crimes in violation of the Matthew Shepard and James Byrd Jr. Hate Crimes Prevention Act; and one count of damage to religious property by use of fire.

Each of the 54 hate crime and obstruction of free exercise of religious beliefs counts apply to congregants who were inside the synagogue during the shooting rampage, U.S. Attorney Robert Brewer said. Of that number, 12 are children, he said.

Earnest is also charged in state court with murder, attempted murder and arson. His next hearing in the state's case is a readiness conference set for Thursday.

Kaye, a longtime member of Chabad of Poway, was at the temple with her physician husband and daughter the day of the shooting to honor her mother, who recently died. The congregation's longtime rabbi lost his right index finger in the shooting. Peretz was shot in a leg while shepherding children to safety. His niece was struck by shrapnel in her face and leg.

An off-duty Border Patrol agent working as a security guard was inside the temple when the shooting began, and he opened fire as the suspect fled, San Diego County Sheriff Bill Gore said. The agent did not strike Earnest, but did hit the suspect's car, authorities said.

Police said Earnest called 911 at around 11:30 a.m. and said he had been involved in the shooting and was armed.

A San Diego police officer who had been en route to the synagogue spotted the suspect's Honda Civix and pulled him over at 17051 W. Bernardo Drive, less than two miles west of the synagogue, Deputy District Attorney Leonard Trinh said. Earnest got out of his car with his hands up and was taken into custody without further incident.

In the "open letter" that authorities say Earnest posted online shortly before the shooting, the author espouses flagrant anti-Semitic sentiments and a need to protect the "European race." He wrote that he spent four weeks planning the attack, citing his "disgust" for Jews and a desire to kill them, and expressed admiration for the Australian white nationalist who attacked two mosques in Christchurch, New Zealand, in March, killing 50 people.

The writer also claimed responsibility for the March 24 blaze set at the Dar-ul-Arqam Mosque in Escondido. The 3:15 a.m. fire was quickly extinguished by people inside the mosque. Graffiti left on the building made reference to the mosques attacks in Christchurch.