Around 3:45 p.m., SDPD reported that the demonstrators had left the area of headquarters. There were no arrests, incidents or injuries, according to authorities. 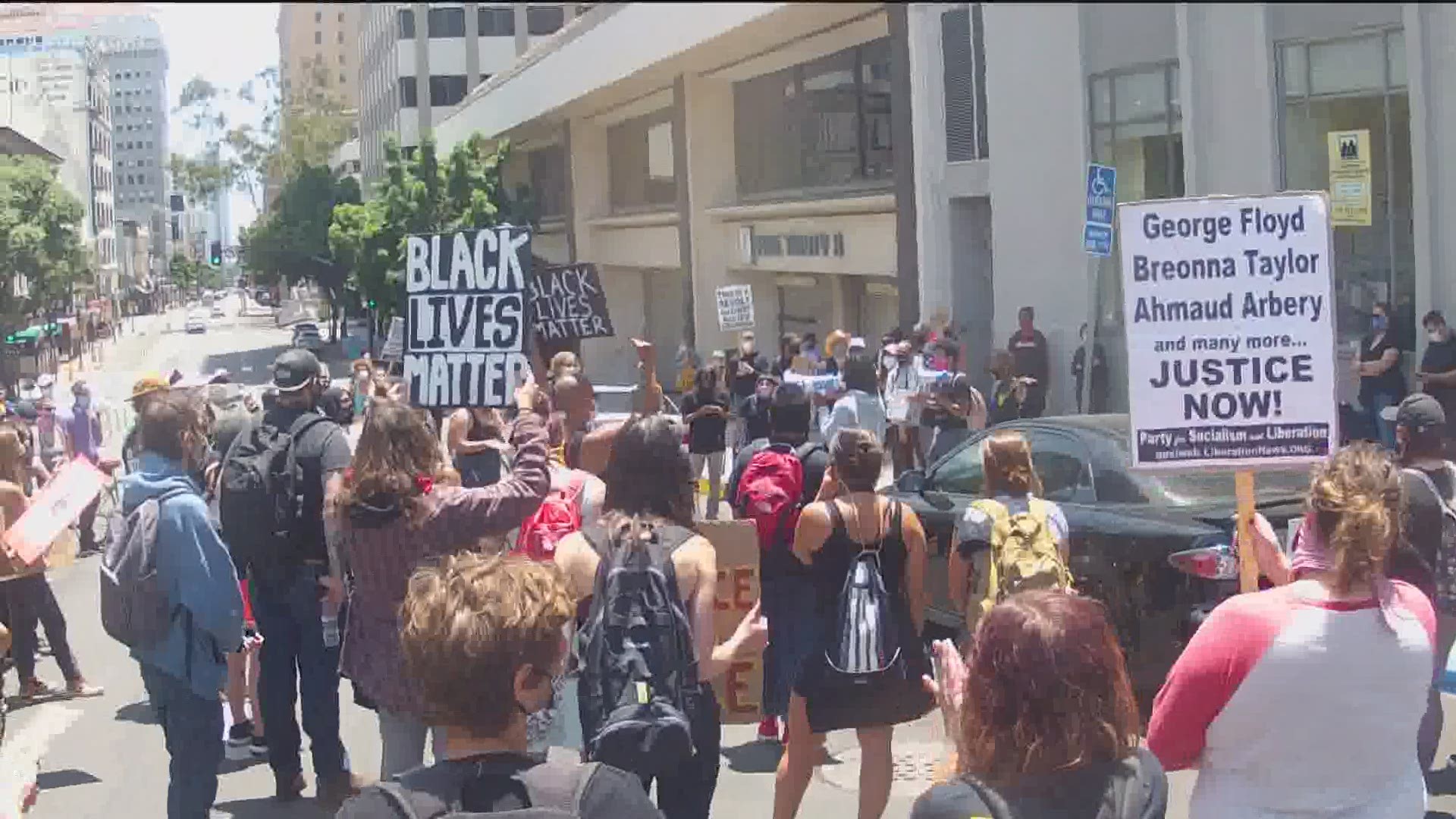 SAN DIEGO — A "Justice for Leo" protest against Saturday's police shooting of a man on Sixth Avenue got underway at Sunday morning at the scene of the incident, organizers said. As of just after 1 p.m., approximately 100 protesters were seen marching through the streets of downtown San Diego.

Around 2:30 p.m. protesters made their way to San Diego Police Department headquarters in the downtown area.

Around 3:45 p.m., SDPD reported that the demonstrators had left the area of headquarters. There were no arrests, incidents or injuries, according to authorities.

As of just before 6 p.m., a smaller group was gathered at the Hall of Justice on Broadway where the San Diego District Attorney's office is located. SDPD formed a barricade to block traffic in the area.

The protest began at Sixth Avenue and A Street, where a small memorial was set up and began to grow with more flowers and photos Sunday morning.

The shooting happened at 5:45 p.m. Saturday in the 1200 block of Sixth Avenue, when two officers from the San Diego Police Department noticed a man leaving a building on the west side of the street and thought he resembled a man sought in connection with a recent robbery, according to SDPD Lt. Matt Dobbs.

The suspect -- who officers thought they recognized from a wanted poster -- pointed a gun at them, authorities said. The officers tried to engage the man - later identified as Leonardo Hurtado Ibarra - before he allegedly took out a gun from his waistband and pointed it at one of them, police said.

It was the officer in the street Ibarra aimed at, Dobbs said. Both officers shot at Ibarra, who was hit and fell to the ground, he said.

The officers handcuffed Ibarra and provided first aid before paramedics took him to a local hospital, where he underwent surgery, police said. As of Sunday afternoon, he remained in the ICU with life-threatening injuries.

No officers were injured.

SDPD released what they called "critical incident video" of the shooting Sunday afternoon. It included street camera and body-worn camera footage of the incident.

Protesters gathered at the scene late Saturday demanding police transparency. About 120 people gathered around police tape, many of them yelling at officers and demanding answers, according to the San Diego Union-Tribune. They chanted "Hands up, don't shoot."

The group San Diegans for Justice issued the following statement Saturday night demanding the release of body cam footage from the shooting:

“An officer-involved shooting occurred in Downtown San Diego [Saturday] at 5:48pm. San Diegans for Justice is requesting SDPD release body cam footage immediately, give the public a timeline for the internal investigation of the incident, and make all aspects of the investigation public as soon as it is completed.

Public trust, however, will only be fully satisfied when an independent, community-led commission can conduct a thorough investigation of incidents such as the one that occurred today. This is exactly why an independent Commission on Police Practices is necessary in the City of San Diego.”