The protesters returned to the streets to demand justice for George Floyd, who died Monday. 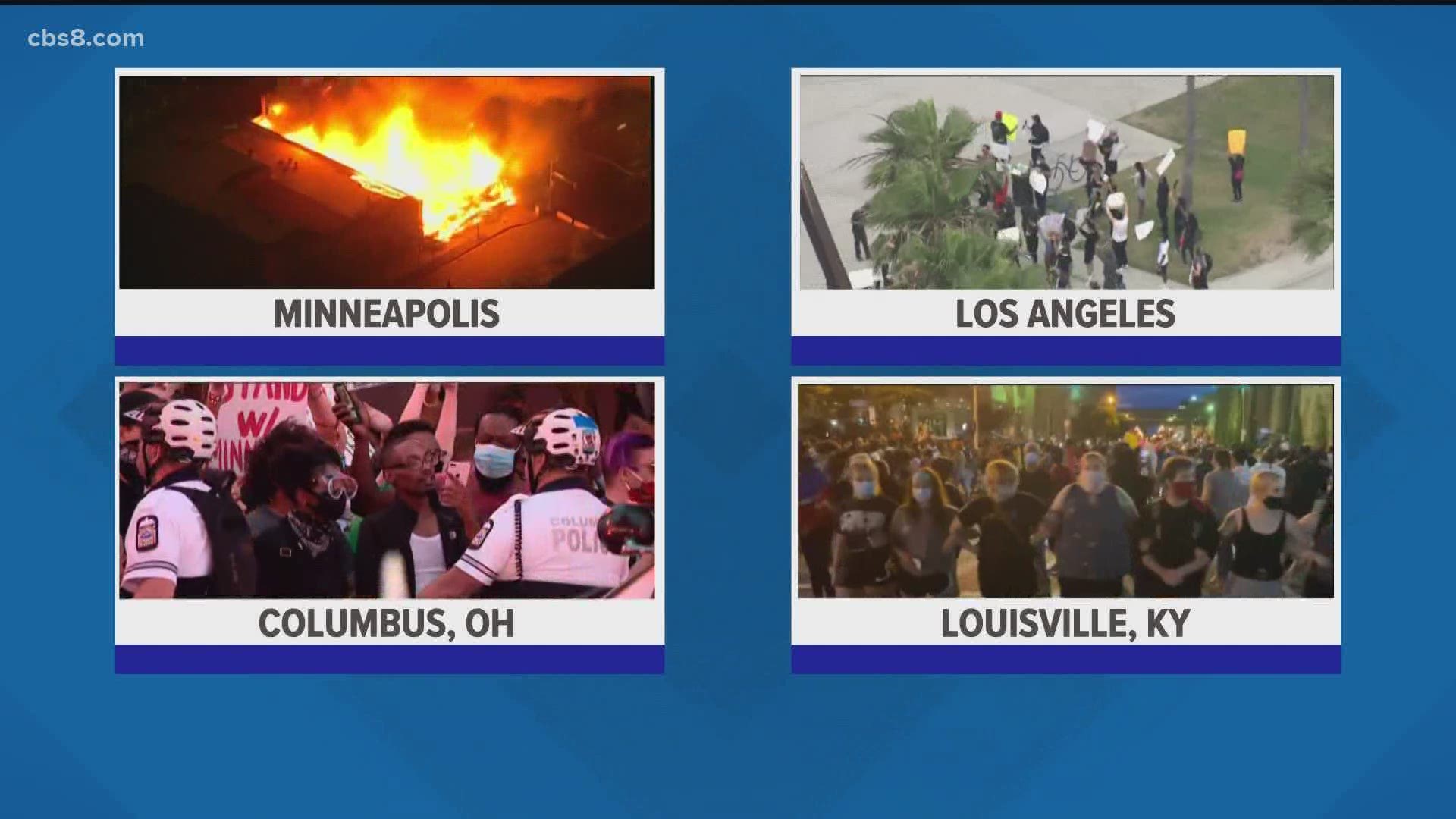 LOS ANGELES — Protests against police brutality continued for a second day in a row Thursday night in downtown Los Angeles, though on a smaller scale than the day before.

Some of the demonstrators surrounded a California Highway Patrol vehicle, and at least one kicked the cruiser, but the car drove off without visible damage.

Another handful of protesters threw water bottles and a skateboard at a law enforcement vehicle near the headquarters. That car also sped off seemingly without sustaining damage.

Protesters briefly blocked traffic at Third Street and Grand Avenue, but the intersection remained closed after they returned to the sidewalk.

Demonstrators returned to the streets to demand justice for George Floyd, who died Monday after being handcuffed and pinned to the ground by a white Minneapolis Police Department officer who pressed his knee on the 46-year- old man's neck for several minutes while three other officers looked on.

Video footage of the arrest, in which Floyd is heard saying "I can't breathe," spread widely online, and all four officers were fired.

Protests that erupted across South Minneapolis on Wednesday and Thursday led authorities to declare a state of emergency in Minneapolis, St. Paul and surrounding communities, where protesters set fire to buildings, including Minneapolis Police Department's Third Precinct Thursday evening, and police fired tear gas and rubber bullets at crowds.

In response to the video of officers kneeling on Floyd's neck, the Board of Directors of the Los Angeles Police Protective League, the union representing the department's rank-and-file officers, said in a statement, "What we saw on that video was inconsistent and contrary to everything we have been taught, not just as an academy recruit or a police officer, but as human beings. Reverence for life in every incident a police officer encounters must be the floor and not the ceiling."

Long Beach Police Department Chief Robert G. Luna said in a statement released Thursday that he was "shocked and saddened to learn of the circumstances surrounding the tragic death of George Floyd in Minneapolis earlier this week."

"The actions of these officers are directly in conflict with the oath we have taken to protect and serve, and also violate the public trust that we have worked so hard to build in our communities," Luna said.

Fatal shootings by both the Los Angeles and Long Beach police departments were mentioned by the Los Angeles Black Lives Matter chapter in a Twitter post shortly before Wednesday's protest to remind followers of black men who were killed at the hands of law enforcement in Los Angeles County.

The Culver City Police Department issued a statement saying its force "shares in the public's disappointment and outrage regarding the disturbing circumstances surrounding the death of George Floyd."

"The women and men of the CCPD continually strive to not only provide the highest level of public safety to our community, but to do so in a manner that is compassionate, professional, and is reflective of the diverse community we serve," the statement says.

"Any lack of compassion or abuse of authority doesn't just tarnish our badge; it tears at the very fabric of law enforcement and community relations."

Los Angeles Police Department Chief Michel Moore said Wednesday night that "the actions I watched in the video were incredibly disturbing and go against the basic law enforcement principle of preservation of life."

"Knowing that we have experienced our own high-profile incidents here in Los Angeles, I can assure you the LAPD strives each day to build trust and these events are sobering reminders of how quickly that can be lost," he said.

"I share in the nation's outrage over the tragic death of George Floyd. Police brutality is unacceptable under any circumstances, and in order to gain the public's trust, we have to respect the very rule of law, we are sworn to uphold," Villanueva said.

The initially peaceful Los Angeles protest, which started about 4 p.m. Wednesday outside the Hall of Justice, turned violent about 6 p.m., when hundreds of protesters entered the Hollywood (101) Freeway, near Alameda Street in downtown Los Angeles.

A demonstrator, who was sitting on one of two CHP cruisers whose windows were shattered, was injured by falling onto the ground when the cruiser sped off to avoid further damage. Los Angeles Fire Department personnel responded to take the victim to a hospital.

"We hear your anger and your pain. We will always facilitate freedom of speech. Period," the LAPD said in a statement on Twitter. "All we ask is that protests are held in a safe and legal manner."

Wednesday's protest was organized by Black Lives Matter's Los Angeles chapter to demand justice for Floyd and to demand that all officers who use excessive force be prosecuted.

"We quickly pulled together a Los Angeles-based protest in honor of George Floyd, who was murdered by police in Minneapolis," Black Lives Matter organizer Melina Abdullah told Fox11. "We had a couple thousand folks out."

Black Lives Matter is seeking prosecution of police officers "when they kill our people" and a reduction of funding for police, Abdullah said.

"We don't need to be spending more than 50% of our city's taxpayer dollars on police," Abdullah said. "Those are the two things that people are calling for in Minneapolis and we echo that sentiment here in Los Angeles."

About 6:30 p.m. Wednesday, hundreds of protesters left the freeway and continued the protest near Alameda and Aliso streets.

Around 8 p.m., a dispersal order was given and the group began moving toward LAPD headquarters at First and Main streets.

Protesters demonstrated into the evening and congregated about 9 p.m. outside the LAPD building, which someone tagged with graffiti that read "1312 ACAB," a common acronym and its numeric code for "All Cops Are Bastards."

Some protesters were also recorded Wednesday evening burning an upside down American flag, but the exact location was not clear.