The 12-page timeline of events begins at 2 p.m. on May 30 with protesters outside La Mesa Police and ends at 3:30 a.m. on May 31 with fireworks being set off. 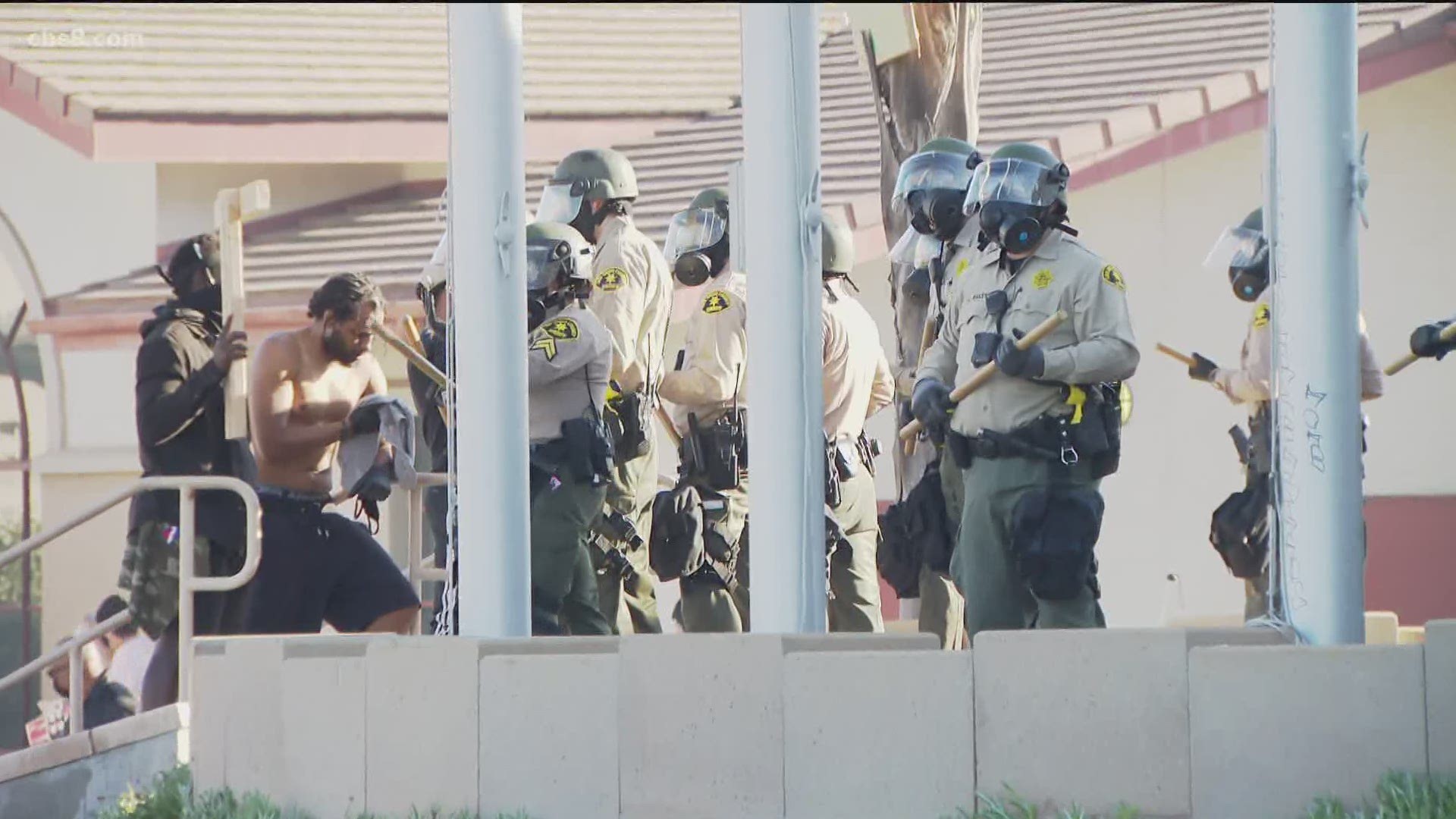 LA MESA, Calif. — La Mesa city officials released a detailed timeline of the event surrounding the protests followed by rioting and looting in the city on May 30.

The timeline starts on Saturday, May 30 a little after 2 p.m. Demonstrators rushed onto Interstate 8 around 3:20 p.m. and according to dispatcher notes, protesters began throwing bottles at CHP officers just before 4 p.m.

This was the first of many reports of objects being thrown at law enforcement.

From there it notates a series of calls reporting vandalism, and more objects being thrown at police as the group made its way around La Mesa.

At 5:08 p.m. a San Diego Sheriff Deputy was reported to have been hit by a rock. This is when the first reported dispersal order was given to the crowd. When the crowd did not disperse, the standoff between protesters and law enforcement continued.

News 8 asked Walt Vasquez, the Chief of Police for the La Mesa Police Department whether they anticipated the protest going from peaceful to violent.

"It’s always hard to judge. You’re working off of crowd dynamics and you never really know exactly what to expect," Vasquez said.

At 5:42 p.m., La Mesa Police reports the first use of pepper ball against the crowd, which is nearly 4 hours from when the timeline started.

The first use of tear gas was reported around 6:02 p.m.

The night continued with several more reports of objects being hurled at officers.

Furcron was released from the hospital Tuesday and plans to hold a press conference on Wednesday in La Mesa.

The first report of looting occurred at 9:12 p.m. at a Vons grocery store. There are several more instances of looting and vandalism across the city including at a Sally’s Beauty Supply, and at Wal-Mart.

The Chase Bank is reported to be on fire at 11:11 p.m., and the Union Bank was radioed in as fully engulfed in flames just 18 minutes later.

Some have questioned why it took so long for officers to respond to the looting and fires. Chief Vasquez said they did have a plan in place but challenges arose.

"That was a challenge at times because every time our police vehicles would get close they would get pelted by rocks and bottles by protesters and there were fires at vehicles," he said.

The 12-page timeline of events ends with a report of fireworks going off shortly before 3:30 a.m. on May 31.

The agencies will put together a final “After Action” report that will be completed in the coming weeks.

The full timeline of events and incident account as reported by the City of La Mesa Police Department can be found below.

RELATED: 100+ arrests made in San Diego after Sunday's protests