One arrest was made during the protest and nearby counter-protest but no injuries were reported. 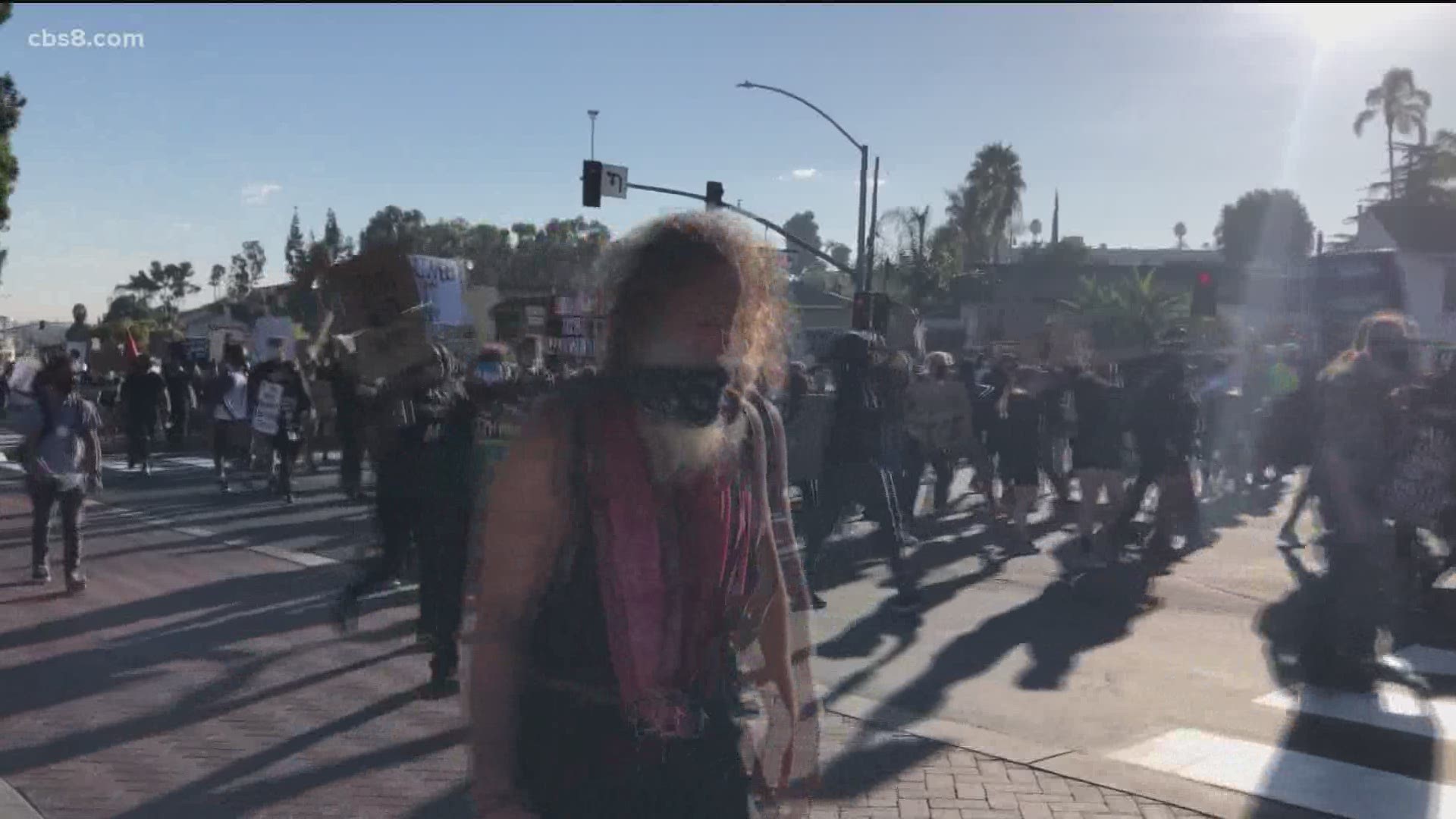 LA MESA, Calif. — Roughly 300 demonstrators gathered Saturday at La Mesa City Hall to demand justice for women of color as the city set temporary restrictions in a two-block downtown zone to facilitate a peaceful event. One arrest was made during the protest and nearby counter-protest but no injuries were reported.

The "We Demand Justice For Our Women Of Color" event was promoted as a way to seek justice for Breonna Taylor, killed in March by police in Louisville, Ky., and Vanessa Guillen, a soldier at Fort Hood, in Texas, who was killed by another soldier in April, according to social media statements.

According to the La Mesa Police Department, a group of approximately 125 people originally gathered at the parking lot on the corner of Date and Allison avenues and another large group gathered at the VFW lot at 8118 University Avenue. Police said several groups were also roving in the area on foot and in vehicles.

"Several physical altercations occurred between the groups as the march passed by the VFW," police officials said. "At least one arrest has been made. No major injuries have been reported."

Officials said that many members of the group at the VFW parking lot were identified as members of a "Defend East County" group.

The person arrested was identified as 35-year-old Ryan McAdams of Jamul who was taken into custody for possession of pepper spray and a probation violation.

Demonstrators returned to the area of Date and Allison avenues just before 7 p.m., according to officials, and held a peaceful speech and prayer event. Again verbal altercations broke out between the group and the VFW group but no arrests were made at that time.

At 9:20 p.m., police said the group of demonstrators appeared to be breaking up but a large group remained at the Veterans of Foreign Wars building.

"Over the past hour, there were several more scattered verbal altercations between the two groups with no further arrests, police said at 8:30 p.m. "Chief (Walt) Vasquez has been able to meet with organizers for the group that has been marching as well as the group at the VFW. Chief Vasquez passed along that the Police Department is here to facilitate a safe and peaceful event, and asked for everyone's cooperation.

Marchers are gathering at La Mesa and University. You can take a look at their signs and their message here... several police cars are blocking traffic allowing this group to continue their rally. @CBS8 pic.twitter.com/Koxmz5V8VN

“I would like to thank the organizers of all of the groups in attendance tonight for their efforts to ensure a successful event for all involved," said Chief Vasquez.
"I wholeheartedly support the citizens’ right to peacefully exercise their first amendment rights, and the men and women of the La Mesa Police Department are here to support that. I would also like to thank the numerous law enforcement partners from around the county, as well as Heartland Fire, for assisting us tonight.”

La Mesa experienced a riot May 30 when a peaceful protest over police use of force turned into violent acts, including arson fires to businesses and looting.

The protest was advertised on social media as scheduled to take place at 3:30 p.m. at police headquarters, but was changed to the La Mesa Branch Library on Allison Avenue, and eventually began at La Mesa City Hall, also on Allison.

Police said visitors to the downtown La Mesa area should plan for traffic delays during the protest.

There is a heavy police presence throughout La Mesa. They have temporary barricades around the police headquarters. They’ve also blocked off the on an off-ramps on I-8. We’ve seen several agencies from National City, Harbor police, Sheriff’s Department, La Mesa, etc. @CBS8 pic.twitter.com/WbJhKaNvt0

The protected zone is an area bounded by University and Allison avenues and Spring Street that includes the police department, city hall and library.

On Friday, the La Mesa Police Department released a statement that they were aware of a planned protest and march that was scheduled for Saturday, Aug. 1. They referenced that plans were in place to facilitate a "peaceful event for all involved."

Below is the full statement from the La Mesa Police Department:

"The La Mesa Police Department is aware of a planned protest and march that is scheduled to take place at the police station tomorrow, August 1st , beginning at 3:30 p.m. We have instituted plans in place to facilitate a peaceful event for all involved. Members of the public planning to visit the downtown La Mesa area are advised they may experience traffic delays and businesses may be closed earlier than usual. We ask those participating in the protest to also respect the rights of others by not blocking roadways. This will also ensure clear pathways for ambulances, fire trucks and patrol cars responding to any emergencies. The La Mesa Police Department has made numerous attempts to communicate with organizers of the protest and march so we can work together to ensure a safe environment where their voices can be heard. Unfortunately, all attempts to contact the organizers have been unsuccessful. It is our goal that tomorrow’s event is a safe exercise of the right to peaceably assemble. We have teamed with our mutual aid partners across the county to ensure we have ample resources on hand to handle violent civil unrest should the need arise. Should those attending resort to committing acts of violence or other crimes, they will be subject to arrest and the event will be legally declared an unlawful assembly. Anyone choosing to remain in the area will be subject to arrest per California Penal Code section 409. The violation is a misdemeanor."

The appointed Director of Emergency and Disaster for La Mesa issued an executive order Friday for a temporary area restriction around the parcel of land that the La Mesa Police Department sits on.

The Executive order is issued from Saturday, August 1 at 12 p.m. through Sunday, August 2 at 5:30 a.m. A copy of the executive order can be found here: RELATED: City of La Mesa issues temporary area restriction order for upcoming protest around police department property

The restricted area is identified in detail in the executive order and references specific edges including sidewalks, fences, and railroad tracks on University Ave., Allison Ave., Baltimore Dr., and Spring St.

The La Mesa Police Department stated that they had made numerous attempts to communicate with organizers of the protest and march to work together to facilitate a safe environment but they were unable to contact the organizers.