The protest, involving hundreds of people in two separate groups, began about 7 p.m. Wednesday near the corner of 8th Avenue and B street and moved along Broadway. 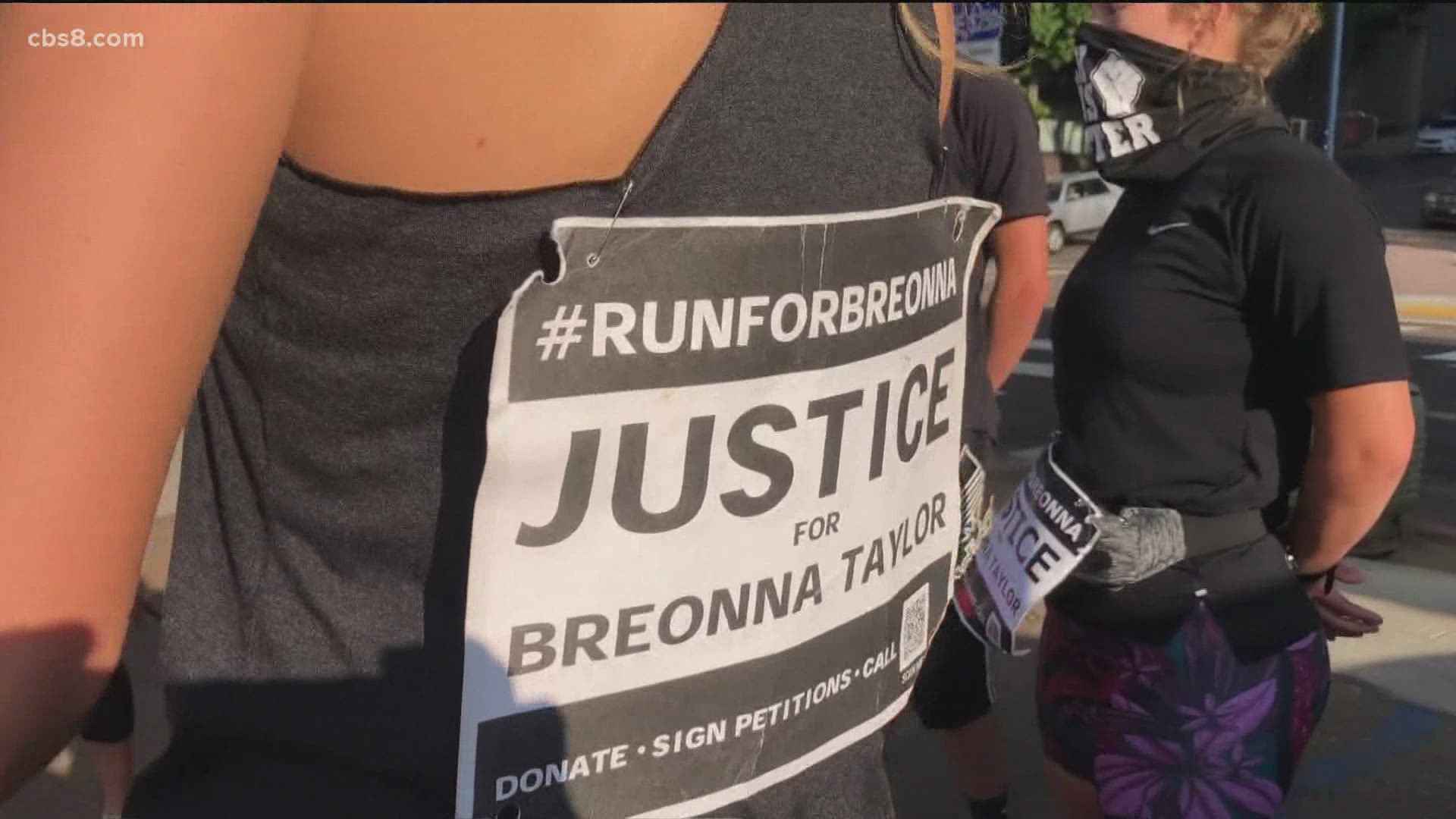 SAN DIEGO COUNTY, Calif. — At least three people were arrested near police headquarters in downtown San Diego during a protest calling for justice in the Breonna Taylor case, it was reported Thursday.

A group that's met at 8th Avenue and B Street in downtown San Diego every day since June 11, making their voices heard with a daily 5K run for Breonna Taylor, said Wednesday's decision won't stop them from continuing.

"Hearing the decision is like, are you kidding me? Seeing them go into a state of emergency before they release the decision -- everybody is tired of all of it. We just want justice, it's not too much to ask and that's what we're expecting. At this point we're demanding it," said organizer Athena Bazalaki.

Bazalaki with Run for Breonna and a supporter of Black Lives Matter helped organize the march after one of the three officers was charged in the case. The botched drug raid took place in March in which officers entered an apartment on a no-knock warrant in Louisville, Kentucky, shooting several rounds and killing Taylor.

The protest, involving hundreds of people in two separate groups, began about 7 p.m. Wednesday near the corner of 8th Avenue and B street and moved along Broadway. 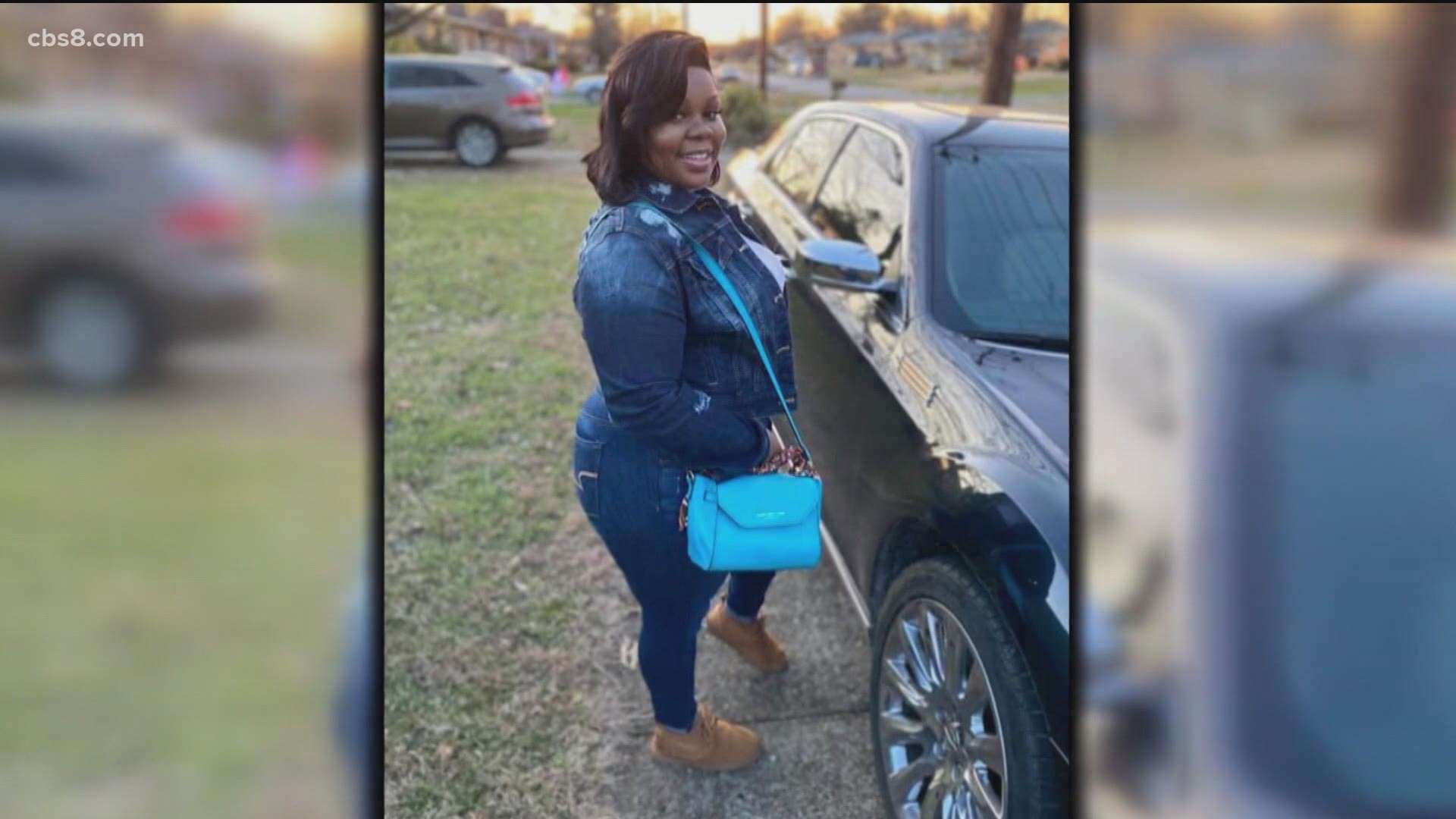 Most protesters dispersed Wednesday night around 9:15 p.m. saying they will come back each night at 8 p.m. to the area of 8th Avenue and B Street.

Around 10:15 p.m Wednesday, the San Diego Police Department declared the protest an unlawful assembly because of "acts of violence and vandalism in front of (police) headquarters.

"Demonstrators are ordered to immediately disperse. If you do not do so you may be arrested," the department tweeted. "There are several routes allowing free movement out of the area."

Officers clashed with the demonstrators on at least two occasions and arrested at least three individuals, the San Diego Union-Tribune reported. It was not immediately clear what crimes the arrestees were suspected of committing.

Taylor, a 26-year-old emergency medical worker, was shot and killed by Louisville police officers during a botched drug raid on her home in March. The warrant used to search her home was connected to a suspect who did not live there, and no drugs were found inside.

A grand jury in Louisville on Wednesday decided that no officers will face charges in relation to Taylor's death.

Prosecutors argued the two officers who fired at Taylor were justified in using force to protect themselves after they were shot at by Taylor's boyfriend.

The officer who fired the fatal shot and another officer who fired his weapon at Taylor face no charges, but former Louisville Metro Police Department Detective Brett Hankison was indicted with three counts of wanton endangerment for firing shots that went through Taylor's apartment and into an adjoining unit.