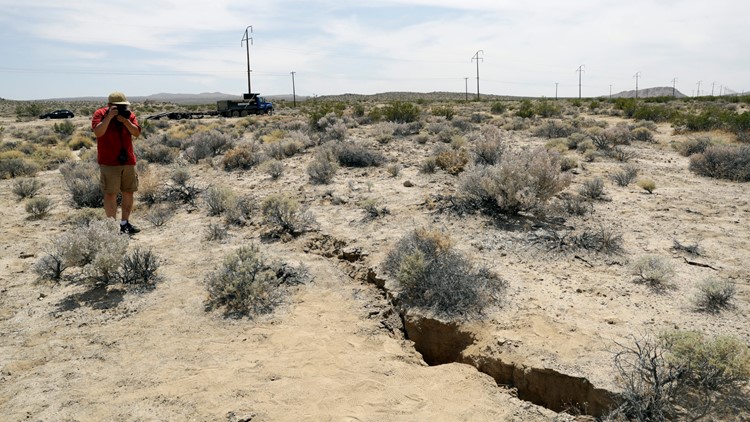 Photo by: AP
A visitor takes a photo of a crack on the ground following recent earthquakes Sunday, July 7, 2019, outside of Ridgecrest, Calif. (AP Photo/Marcio Jose Sanchez)

Quake damage estimate tops $5B at California Navy base

LOS ANGELES (AP) — Earthquakes that struck California last month caused more than $5 billion in damage to Naval Air Weapons Station China Lake, a sprawling desert facility where some of the military's most advanced weapons are tested, according to an estimate made public Wednesday.

A survey of nearly 3,600 buildings conducted over 13 days found that repairing or replacing damaged base buildings alone will cost about $2.2 billion, including hangars, repair facilities, offices, a laboratory, 22 ammunition magazines, an air traffic control tower and even a gym and pool, according to an overview presented to potential contractors at an Aug. 1 forum. It was posted Wednesday on the webpage of the Naval Facilities Engineering Command Southwest.

RELATED: VERIFY: Most homeowners in California do not have earthquake insurance

The base's total repair and replacement cost of $5.2 billion includes buildings as well as furniture, tools, communications and other specialized equipment.

However, officials say the figures could change before an estimate finally reaches Congress. Any funding for repairs and reconstruction will require congressional and presidential approval.

"Until that process is completed, there are no official figures. It's all speculative at this point," said Lee Saunders, spokesman for the southwest engineering command.

Whatever the final figure, bringing the base back up to operational standards will be costly.

The quakes caused serious cracks in some buildings, sheared bolts from support beams and damaged water pipes and electrical equipment. A laboratory where advanced weapons technology is tested was declared unsafe and other areas of the over 1,700-square-mile (4,400-square-kilometer) base still are not "mission capable," the Navy Times reported.

"There was damage to a majority of the buildings and infrastructure," according to an email from Capt. Mark K. Edelson, commanding officer of Naval Facilities Engineering Command Southwest, the Navy Times reported.

The email said about 20% of the buildings have been declared unsafe or have had their use restricted.

The email also said more than half of the base buildings date from before 1980 and some go back to World War II, so many didn't meet current earthquake safety standards.

The Mojave Desert base east of Los Angeles was near the epicenter of quakes that struck July 4 through July 12. They include a 6.4 temblor on Independence Day, a magnitude 7.1 quake the next day and thousands of aftershocks.

Authorities have estimated the quakes, which were felt in several states, damaged at least 100 homes and businesses, causing at least $100 million in damage mainly to the sparsely populated communities of Ridgecrest and Trona.

The China Lake base is about 3 miles (4.8 kilometers) north of Ridgecrest.