Ramona teen is on the "rodeo to recovery" with her horse

After falling off her horse during practice the teen had a traumatic brain injury but says her horse helped her heal. 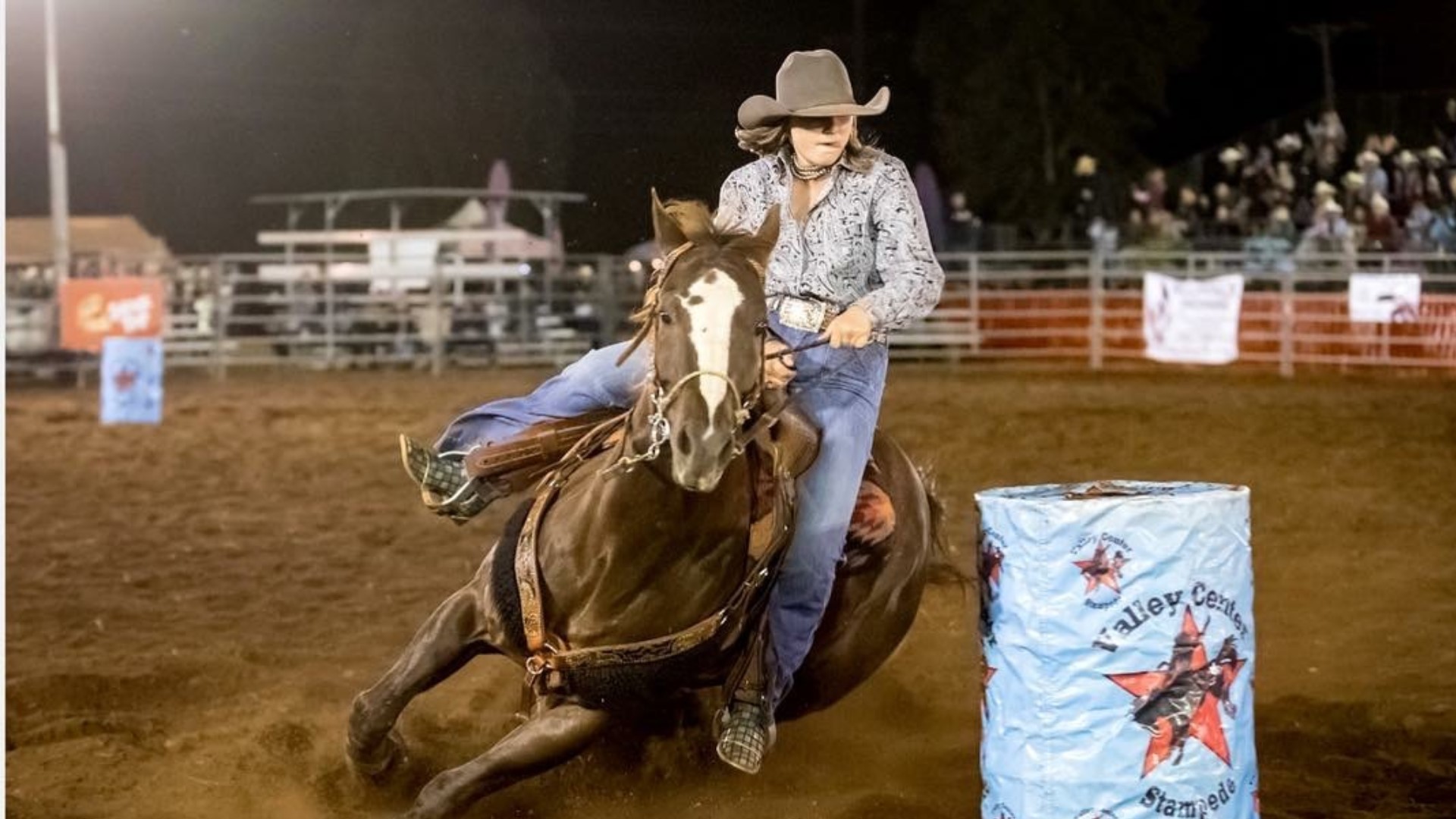 RAMONA, Calif. — A Ramona teen says her world came crashing down when she fell off her horse in 2018. She was practicing for a rodeo competition when the fall left her with a traumatic brain injury.

After months of therapy, it's been a  long "rodeo to recovery,” and the young woman says her horse, Earl, played a big part in her healing.

"I don't know what it is about horses, I love horses,” said 17-year-old Lynlee Crist,

It’s easy to see that horses are Lynlee’s first love. Her copper-colored 19-year old quarter horse named Earl was given to her by friends, Lisa and Greg Johnson, and Lynlee says Earl is her everything.

When Lynless was little, she said she couldn’t pronounce Earl and would call him “oil.” Unlike oil and water, this horse and human team mix well. Lynlee and Earl have competed together in dozens of tournaments.

She won a shiny gold belt buckle for winning second in the state of California for team roping in 2017. Lynlee was also ranked 31st in the country at the National Junior High Rodeo Finals.

But while practicing roping with Earl in Lakeside on November 17, 2018, the unimaginable happened.

Sandra remembers the painful accident when Earl fell on top of Lynlee and how it changed her life from that moment on.

“The horse’s foot got caught in the sled, and it pulled his legs out from under him, and down she went and was immediately unconscious not breathing,” said Lynlee’s mother Sandra Crist.

“Almost like a whiplash, the horse’s legs were ripped out from under him, and it fell like a pancake, so he’s - you know - 16 hands tall, and where her head was and where it hit, you know the g-forces were intense,” Sandra Crist said.

Lynlee was rushed to the hospital in a coma and not breathing on her own. The trauma surgeon said Lynlee had severe swelling in her brain.

“He didn’t know if she would ever wake up again.” Sandra Crist said.

Lynlee’s family was frantic as she didn’t wake up for 27 hours after the accident.

“I said wake up, and look at mommy, and she moved her eyes and just looked over at me, and it was like amazing,’ Sandra Crist said.

Lynlee’s recovery astonished even her doctors. “I have not seen another patient who has been injured specifically having the horse roll over on top of them... she’s a miracle,” said Dr. Phoebe Scott-Wyard, Pediatric Physician at Rady Children's Hospital.

"She was struggling quite a bit, she had a lot of the typical symptoms that we see in children that have a brain injury or concussion,” Dr. Scott-Wyard said.

Lynlee went through weeks of physical therapy at Rady Children's Hospital with Dr. Scott-Wyard, who tracked her progress.

Dr. Scott-Wyard says Lynlee’s case was worse than a concussion but she had no bleeding on her brain. She could walk and talk normally though her brain wasn’t functioning properly.

The doctor said the biggest piece to recovery for injuries like this is to get patients back to their normal routine.

“The sooner we can get them back into their day-to-day activities and get them having a normal life again, they actually get better faster,” she said.

In tears, Sandra Crist said that the very same day the family brought Lynlee home from the hospital the only thing she cared about was going down and seeing Earl.

“I believe that her horse is probably the biggest therapy for her. He’s probably what drove her to get better,” Sandra said.

After months of recovery, Lynlee was back in the saddle again except now she has to wear a helmet. And though the helmet isn’t required by her doctors - it is required by her parents.

“If I hit my head again they told me I could possibly die,” Lynlee said.

Hearing so many negative reports, Lynlee, a junior at Ramona High School, said she had her doubts about riding again.

“Any time Earl would make a weird move or something, my heart drops, and I get scared,” she said.

But Lynlee didn’t let go of her dream or her 14-year junior rodeo career. She continued to practice daily and it has paid off as Lynlee is already competing in races again.

“The first one that she competed in since the wreck, and she won the buckle, so that was pretty exciting," Sandra Crist said.

Earl was also injured badly in the fall and the family was going to retire him in Texas. But just like Lynlee, he seemed to recover so well they changed their minds.