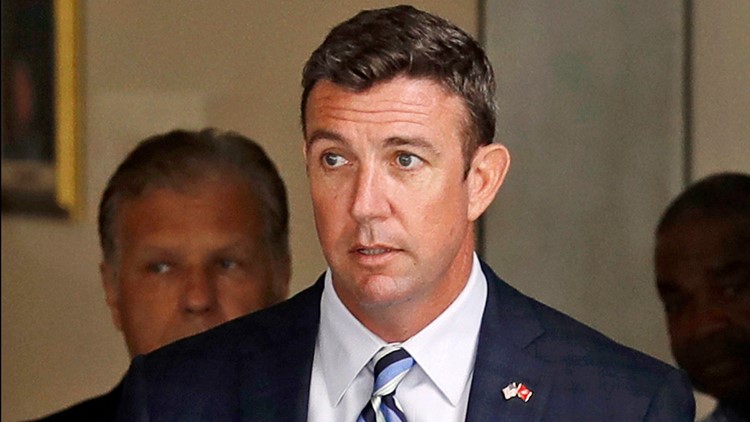 Photo by: AP
FILE - In this Aug. 23, 2018, file photo, Republican U.S. Rep. Duncan Hunter, R-Calif., leaves an arraignment hearing in San Diego after he and his wife, Margaret, pleaded not guilty to charges they illegally used his campaign account for personal expenses. Federal prosecutors say Hunter illegally used campaign funds to finance romantic flings with a series of women, spending thousands of dollars on meals, drinks and vacations. Allegations about the married Republican congressman's affairs were outlined in a government court filing late Monday, June 24, 2019, connected to charges he and his wife misspent more than $200,000 on trips and personal expenses. (AP Photo/Gregory Bull, File)

The San Diego Union-Tribune says the service wrote Hunter a letter Tuesday asking him to immediately stop using the USMC Eagle, Globe and Anchor emblem and the phrase "No Better Friend, No Worse Enemy" on all campaign materials.

The letter says the Republican lawmaker is welcome to state he's a Marine veteran and use an alternative logo.

Spokesman Michael Harrison says Hunter is disappointed but the campaign is complying with the request.

Harrison released a statement to News 8 on the matter that read in part:

Hunter is fighting for reelection in 2020 while facing criminal charges that allege he and his wife used $250,000 in campaign donations for personal expenses. His wife has pleaded guilty and agreed to testify against him.