In light of an increase of violence against the Asian American community, dozens of runners showed up to Miramar Lake for the “Stop Asian Hate 500 Miles Challenge." 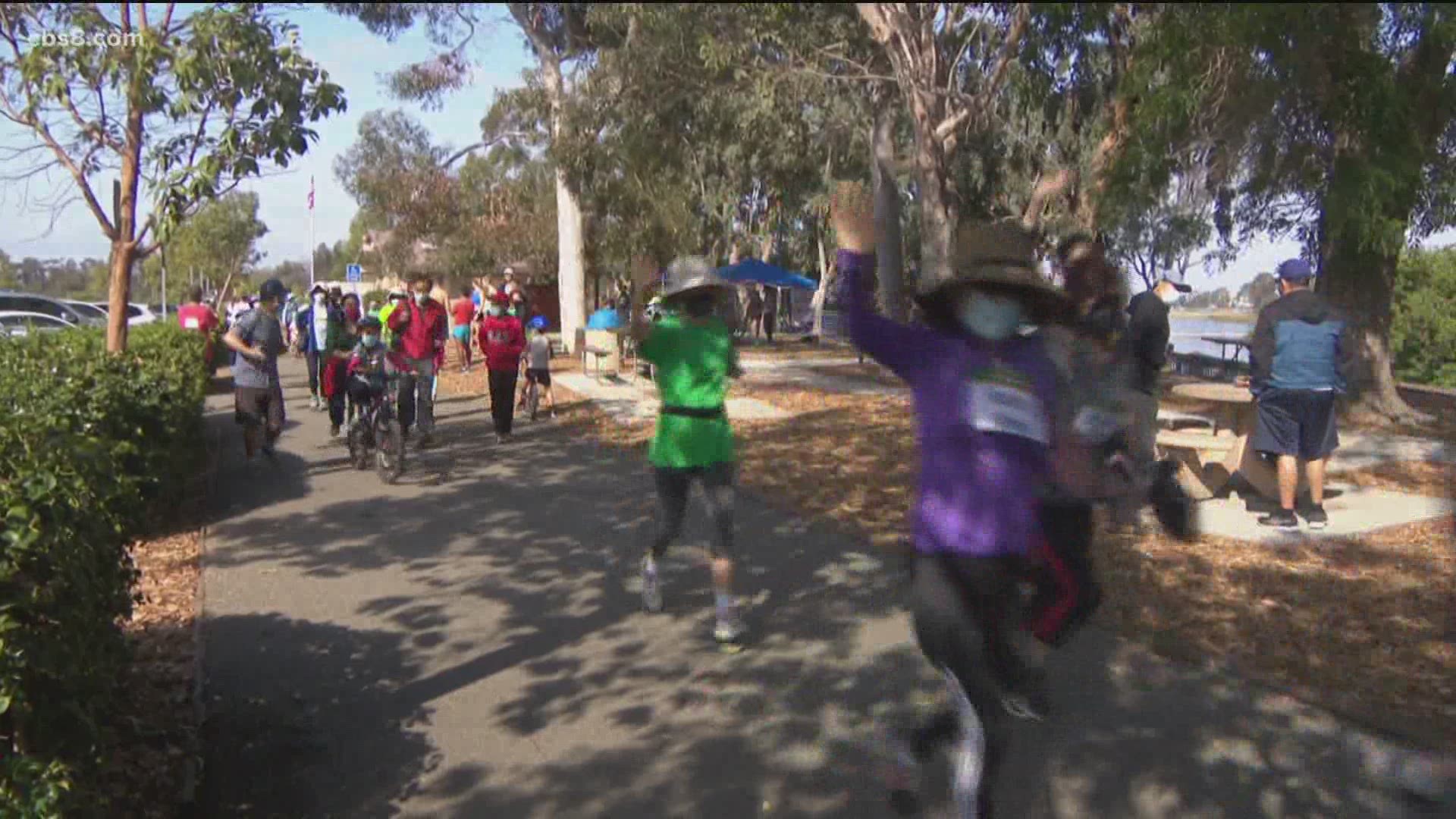 SAN DIEGO — Close to 100 runners came together at Miramar Lake on Saturday for the  "Stop Asian Hate 500 Miles Challenge" for anyone to do a 5, 10, or 15-mile walk or run to learn about Asian American history.

Organizer Aiken Wang did a crash course with a display board devoted to historical facts about Asian American culture.

"It probably comes as a surprise to a lot of people that they were such a tense history. A lot of people know about Japanese internment but maybe not the San Francisco pandemic or the Chinese Exclusion Act,” Wang said.

Groups of runners started every hour from 7 to 10 a.m. hosted by high school students and their parents as part of the group "We Impact,” which has previously held awareness rallies. Their goal to make their voices heard in light of the recent attacks on the Asian American and Pacific Islander community nationwide.

Wang said, "We don't just want to stop hate crimes as they happen, we want to stop people from wanting to commit them in the first place.”

Some attendees ran, some walked and some rode their bikes. A few brought along their furry friends. The awareness continued with the group holding up signs saying "Stop AAPI hate" and “Racism is the virus."

“Here to educate for all the generations when historically the perception of many Asians has been to be quiet, meek and nonconfrontational. We are trying to change the image, we are trying to speak up for ourselves, and we want to speak out and let America know that we are also a part of the nation,” said runner Ying Tao.

As violence against elderly Asian Americans escalated, fears grew. Parent Olivia Tian said, “When I get older, that could happen to me."

She also feared the backlash that came along with the blaming of the coronavirus pandemic solely on the Asian community.

“It was scary and terrifying for us because I feel that we are Asian Americans living in this country, but when people use that in general terms, then I feel I am part of it, and I feel my kids also feel the same way. They feel guilt,” Tian said.

Tian said explaining the recent and rampant discrimination to her young children has been challenging.

"I am a mom, and I don't want to see the same thing happening to the next generation. I don't want my kids to be ashamed of being a Chinese American or an Asian American. They should be proud."

Aiken Wang said he's been made fun of for being Asian American and hopes the runs will help put an end to hate.

"We are letting them know that yes, this is a problem, and yes this is an issue that we as Americans need to address, and that is why we are here,” Wang said.

The group took it literally one step at a time to bring home the message of diversity and unity.

Wang said, "I think the actual awareness will definitely make a difference. I am not sure if it will be enough though, but it is progress, and I think that is what is important.”