Protests began Saturday morning at the state Capitol, with demonstrations also taking place in Arden Arcade and outside the Sacramento Jail.

SACRAMENTO, Calif. — 3:00 a.m. update:  Sacramento Police tweeted that, "Majority of the crowd has dispersed.  There will be a police presence throughout downtown for the remainder of the night as detectives conduct follow-up on looting and vandalism crimes."

2:00 a.m. update: Sacramento Police said they are using tear gas in the downtown area after demonstrators threw rocks and started a fire.

1:16 a.m. update: Police and small groups of demonstrators are still in downtown Sacramento.  Police said a small fire inside Macy's was put out by the store's sprinkler system.

There's damage inside the downtown Bevmo: 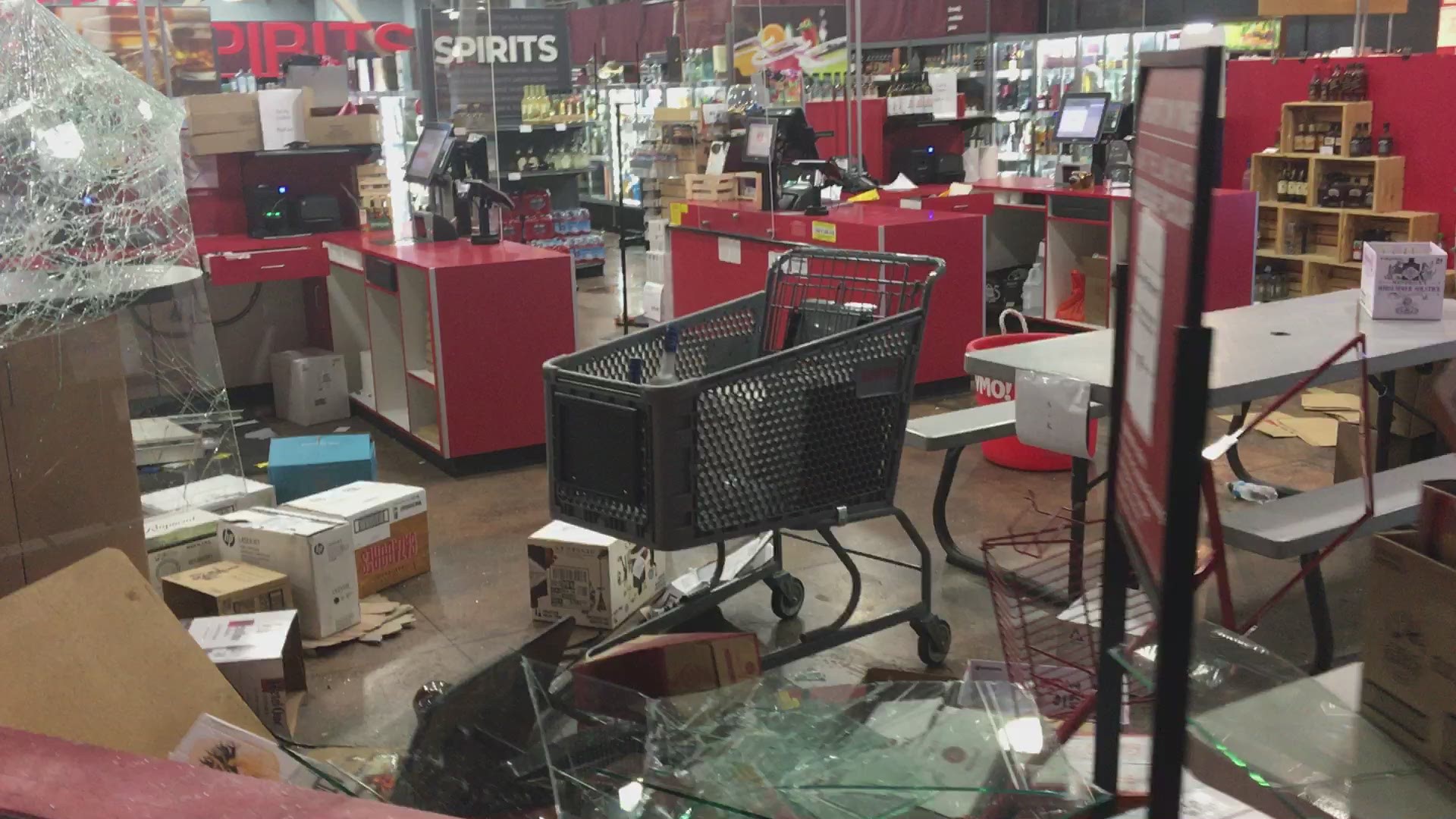 12:35 p.m. update: Sacramento police told ABC10 that they do not have any arrest or injury information to release yet.

A video posted on YouTube shows a man throwing something at the line of officers and then police firing. Seconds later the man is carried away by a demonstrator.   It's unknown if this is the same person as referenced by the SPD. 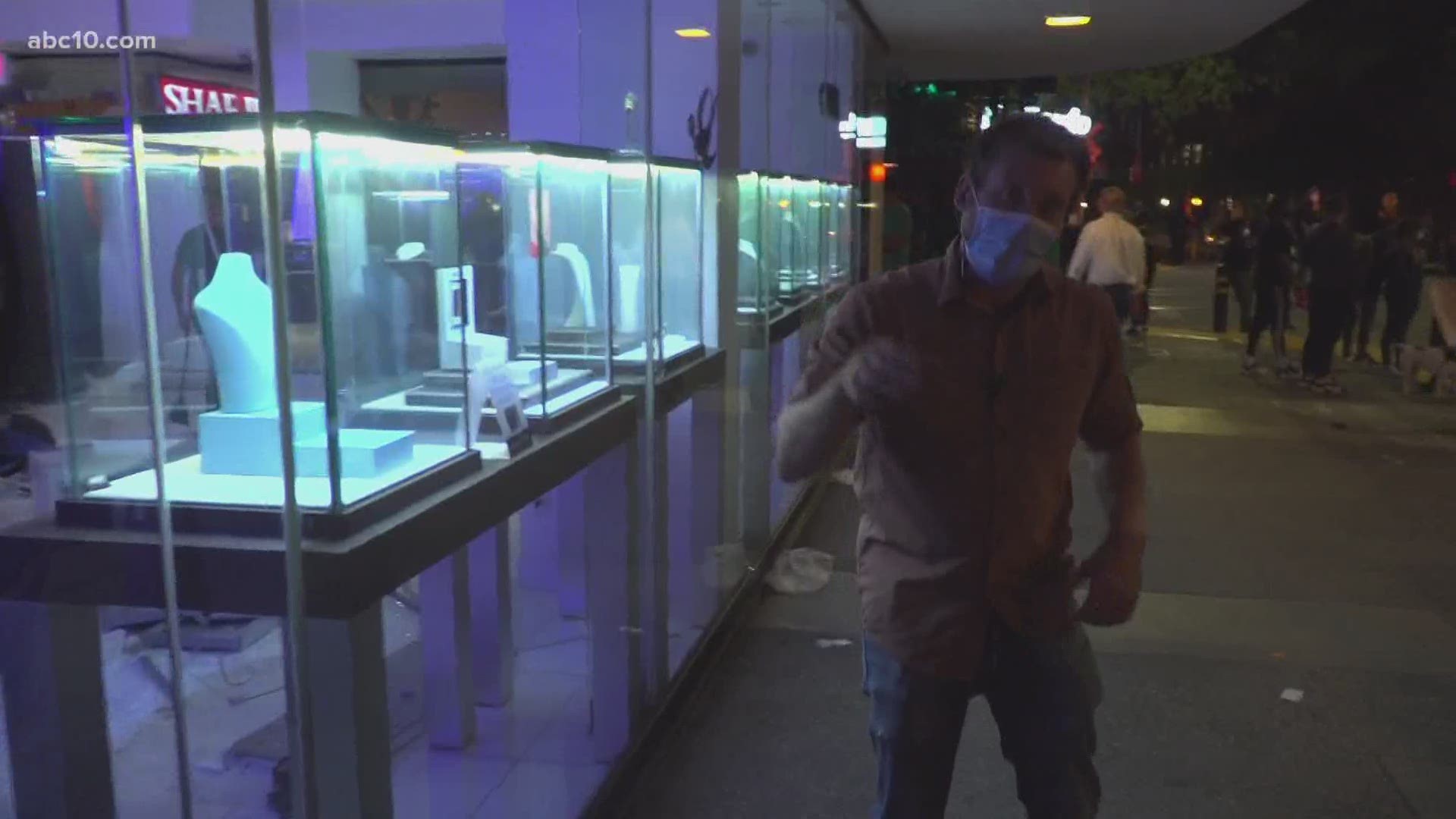 Mayor Darrell Steinberg issued a statement on protests in Sacramento. In a statement he posted to Twitter, Steinberg said "destruction is the opposite of righteous protest."

"What we are witnessing tonight is not what Sacramento stands for," he said in the tweet. "I pray this night ends safely for the peaceful protesters, our law enforcement officers and the community we love."

The Sacramento Police Department said that there has been looting in downtown Sacramento.

Protesters were at 6th and I street when the declaration was made.

"We heard multiple explosions that sounded like firecrackers. There were also two fires in the street. Officers had to result to rubber bullets," said ABC10's Kevin John.

About 700 protesters gathered outside the Sacramento County Jail in downtown Sacramento.  Police fired what appeared to be rubber bullets, ABC10 reporter Kevin John, who was near the jail said.

Officers from multiple agencies were protecting the jail, John said.  Protesters vandalized and damaged the outside jail.  Firecrackers were heard in the street.  A small fire was lit in the street.

Some protesters were kneeling down on one knee and chanting, “I can’t breathe!" along with other slogans.

Hundreds of protesters have showed up to the county jail. ABC10

The organization behind a police memorial near the Capitol building is condemning those who vandalized the memorial while protesting police brutality Saturday.

The monument was erected in 1988 to honor the men and women of California law enforcement who lost their lives in the line of duty, according to the press release.

Mickelson said the organization is working with authorities at the Capitol to identify those responsible.

Target announced plans to close some of its stores after one of its shops in St. Paul was vandalized during a protest over the death of George Floyd.

"We are heartbroken by the death of George Floyd and the pain it is causing communities across the country. At this time, we have made the decision to close a number of our stores. We anticipate most stores will be closed temporarily," Target said in a press release.

Several stores will be closed in the Sacramento area:

The press release says "team members impacted by store closures will be paid for up to 14 days of scheduled hours during store closures, including COVID-19 premium pay. They will also be able to work at other nearby Target locations."

Sacramento County Main Jail was vandalized during a protest against the death of George Floyd, who died after being pinned for minutes beneath Minneapolis Police Officer Derek Chauvin's knee on Monday.

The Sacramento County Sheriff's Office said a group of people "approached the jail and vandalize it to some extent."

The extent of the damages isn't known at this time, the sheriff's office said. No reported injuries were reported at the jail.

Sacramento Regional Transit is rerouting several bus routes in response to the ongoing protest. Routes 13, 23, 67 and 68 will be detoured to Response Road next to Kaiser. All of the routes are along Arden Fair Mall.

Marchers have also moved to the area of Arden Way and Fulton Avenue to protest the death of George Floyd. Arden Fair Mall closed early on Saturday, May 30, with a message on its website stating because of "potential demonstrations in the local area." 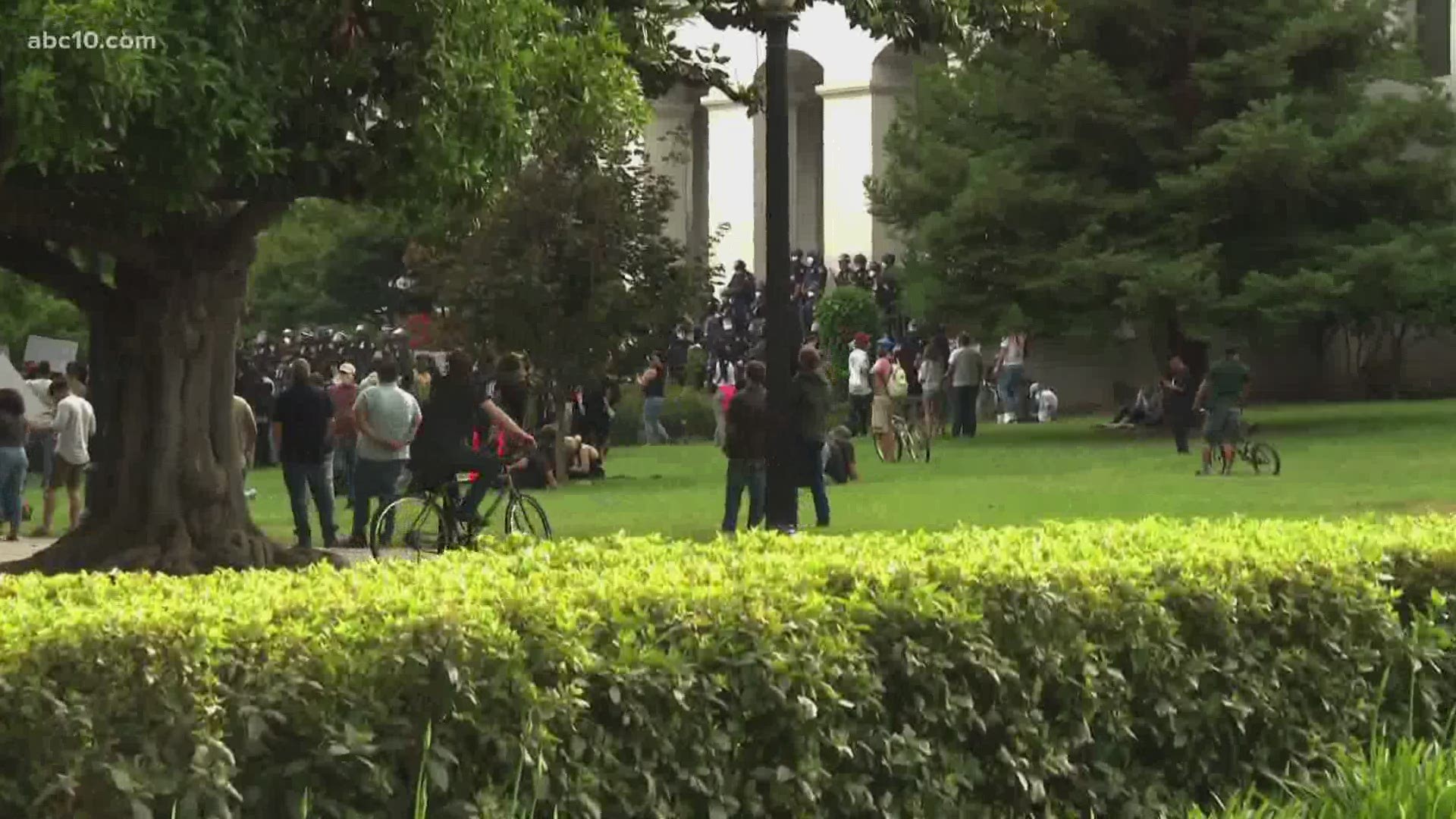 California Gov. Gavin Newsom released a statement regarding the protests that have taken place throughout the state in response to the killing of George Floyd.

Hundreds of people swarmed downtown Los Angeles late Friday and police said they made 533 arrests. In Oakland, 13 officers were injured as demonstrators hurled objects at them.

“In California and across the country, there are indications that violent actors may be attempting to use these protests for their own agendas," Newsom said in the release. "We are closely monitoring organizing by violent extremist organizations ahead of tonight. To those who seek to exploit Californians’ pain to sow chaos and destruction, you are not welcome."

A large crowd gathered at the California Capitol Saturday morning to continue protesting the death of George Floyd, who died after being pinned for minutes beneath Minneapolis Police Officer Derek Chauvin's knee on Monday. Chauvin has since been charged with third-degree murder and second-degree manslaughter for the death of Floyd. He and the other three officers involved in Floyd's arrest were fired Tuesday.

On Facebook, Black Lives Matter Sacramento said in a comment that Saturday's protest was not organized by its organization.

This comes a day after protestors marched in the Oak Park neighborhood of Sacramento. More than 100 people attended Friday night's gathering as a way to show solidarity with protesters in Minneapolis and across the country, after the death of Geroge Floyd in police custody.

The Sacramento Police Department asked via Twitter that people avoid the downtown area, and to use alternate traffic routes, if possible. According to various media outlets, the protestors marched along K Street before heading to Old Sacramento and crossing the Tower Bridge into West Sacramento before turning around and heading back to the Capitol.

According to a public information officer with the California High Patrol [CHP], asmall group of protesters walked onto I-5 at about 1:45 p.m. During that time, the freeway was briefly closed for about 20 minutes, but has since reopened. They did not say if anyone was arrested. No word if arrests. The protestors were peaceful and were escorted off, according to CHP.