The announcement comes as churches statewide looked forward to guidance from Gov. Gavin Newsom on how they can reopen. 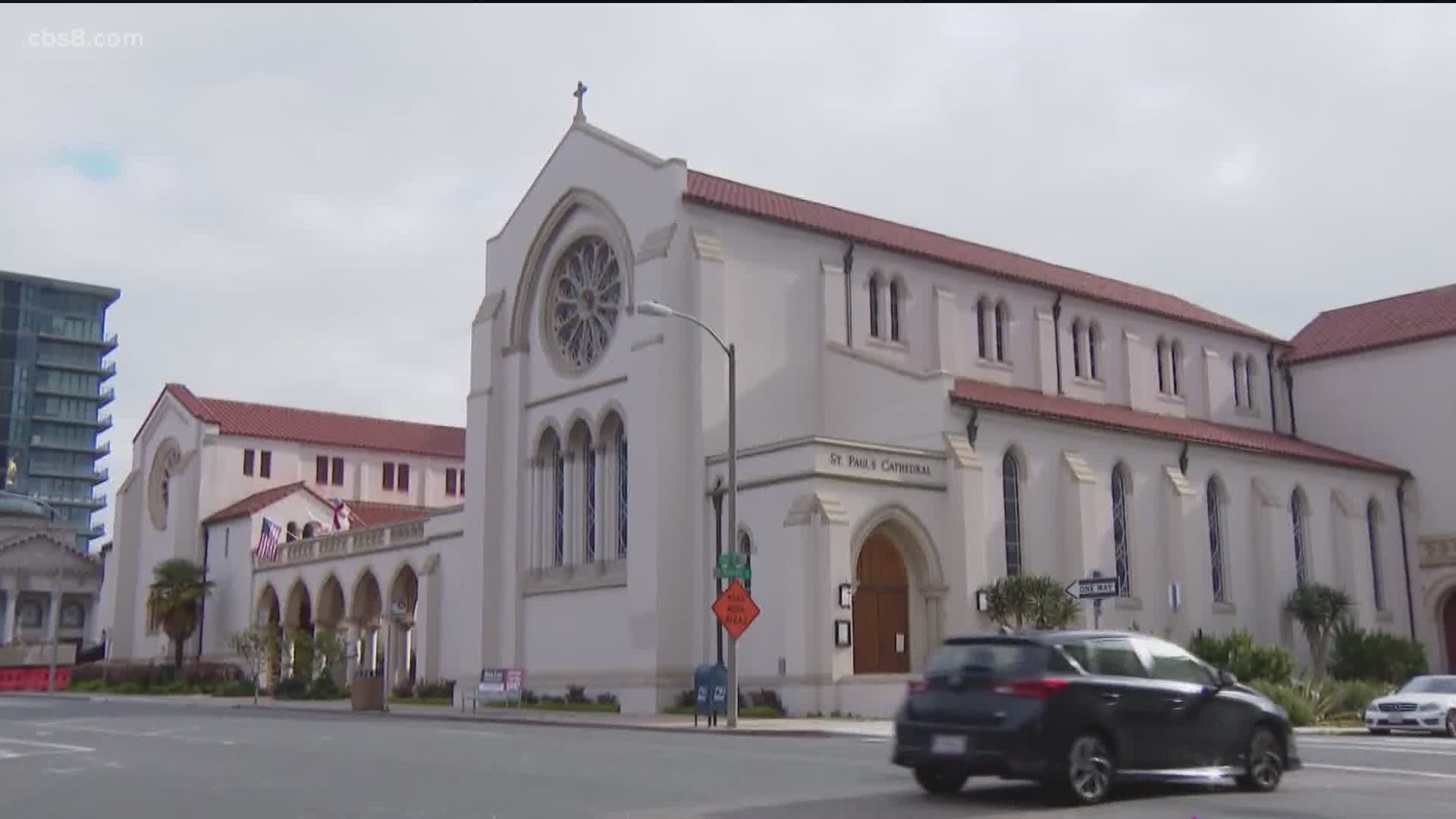 SAN DIEGO COUNTY, Calif. — Some 1.3 million Roman Catholics in the San Diego County diocese are being invited to attend in-person Masses as early June 8 after closing for COVID-19 in mid-March, church officials said this weekend.

Parishes may adopt different logistics, such as indoors, outdoors or a hybrid.

The announcement comes as churches statewide looked forward to guidance Monday from Gov. Gavin Newsom on how they can reopen.

"After a great deal of discussion, we concluded that the first weekend for the public celebration of the Eucharist in our parishes should be the feast of Corpus Christi, June fourteenth," Bishop Robert McElroy said in a letter written Friday and posted Saturday on a private Facebook group. "This seems a beautifully symbolic and joyful feast in which to bring together anew our Eucharistic communities."

But McElroy said a weekday opening has been suggested.

"Thus, if a pastor wishes to initiate daily Mass from Monday, June 8, that will be permitted," he wrote in the two-page letter.

Parishioners are not required to attend in-person Masses. McElroy said he has removed the obligation "for the foreseeable future," so people can opt to worship online. "All of us must urge sick or especially vulnerable members of our communities to refrain from coming to Mass, and we must continue the wonderful online Masses that so many of you have been providing for your people in these days," he said.

The Rev. Andre Ramos of Guardian Angels Catholic Church in Santee was among pastors sending letters to parishioners.

"The privilege of celebrating Masses will be ours again but under necessary measures to make sure our acts of worship are safe," Ramos wrote. "As long as the threat of COVID-19 is not fully eradicated, we have to protect ourselves and others from infection, illness and even death."

In another email, the Rev. Carlos Medina of St. Patrick's said space inside his North Park church has been measured and allows 65 people to enter and be spaced 6 feet apart. "There could be more people, since these measurements and calculations did not take into consideration households," he said in a letter dated May 16 about a preliminary draft of the plan. "However, on average Sundays prior to the ongoing pandemic, two of our Masses reached over 200 people in average attendance."

Eckery said that although baptisms, weddings and funeral Masses will be allowed beginning the second week of June, distancing and other measures must be complied with.

The new rules include:

-- No wine (traditionally shared from a communal same glass) during Communion, and wafers will placed on the tongue.

-- Face masks will be required.

-- Hand sanitizers should be used.

-- Physical distancing will be compulsory.

-- Hymns will be restricted.

"Masses will need to be shorter, essential liturgical parts shall be retained and some can be omitted and a few others are outright forbidden," Eckery said.

Prayer missals and songbooks will be removed, and choirs are being eliminated. "Singing won't be allowed because of evidence suggesting droplets projected while singing travel further than those generated by normal speech," the diocesan spokesman said, adding that the diocese will be setting guidelines for all parishes to follow.

The letter posted on a private Facebook page for 300 San Diego Catholics was sent to all priests of the diocese.

"The involvement of priests and pastors has been central to developing a practical and effective plan to reopen safely," he said.

According to guidelines distributed to parishioners at St. Patrick's:

-- The faithful must remain in their pew/place for the duration of the Mass/service/celebration.

-- They may recite prayers and responses where appropriate to the Mass/celebration, but they must not sing, or shake hands. They must refrain from touching their faces.

-- Instrumental music or a single vocalist will be allowed -- even though parishioners won't be singing.

-- Instead of shaking hands or exchanging hugs at the Sign Of Peace, the priest will encourage parishioners to wave or nod to each other.

-- The distribution of the Eucharist will take place at the end of the Mass, to minimize the movement of people. There will be markings taped on the floor as a guide for social distance so that communion line at the end of Mass maintains 6 feet of separation between communicants. The Eucharist is to be received only in the hand.

-- There should be no social gatherings before or after Mass.

-- Bishop McElroy doesn't approve of Mass in a parking lot where people stay in their cars, so people will be asked to bring their own chairs.

-- Facemasks/coverings are not required for children under the age of 2 years old due to the risk of suffocation, in accordance with county health regulations.

-- There are to be no altar servers.

-- Holy water fonts will be empty.

The Rev. Medina of St. Patrick's suggested a special location may be set up for people with conditions such as allergies or a dry throat "so that their cough may not cause distress to others. We might need a parishioner physician to oversee these parishioners who are likely to be non-contagious."

In his letter, Bishop McElroy said he spoke at length Friday with Dr. Wilma Wooten, San Diego County's public health director, "and received support for our plan to reopen our parishes in a manner that will vigorously safeguard public health."