The briefing comes on the day that essential businesses have to start posting COVID-19 guidelines near entrances. 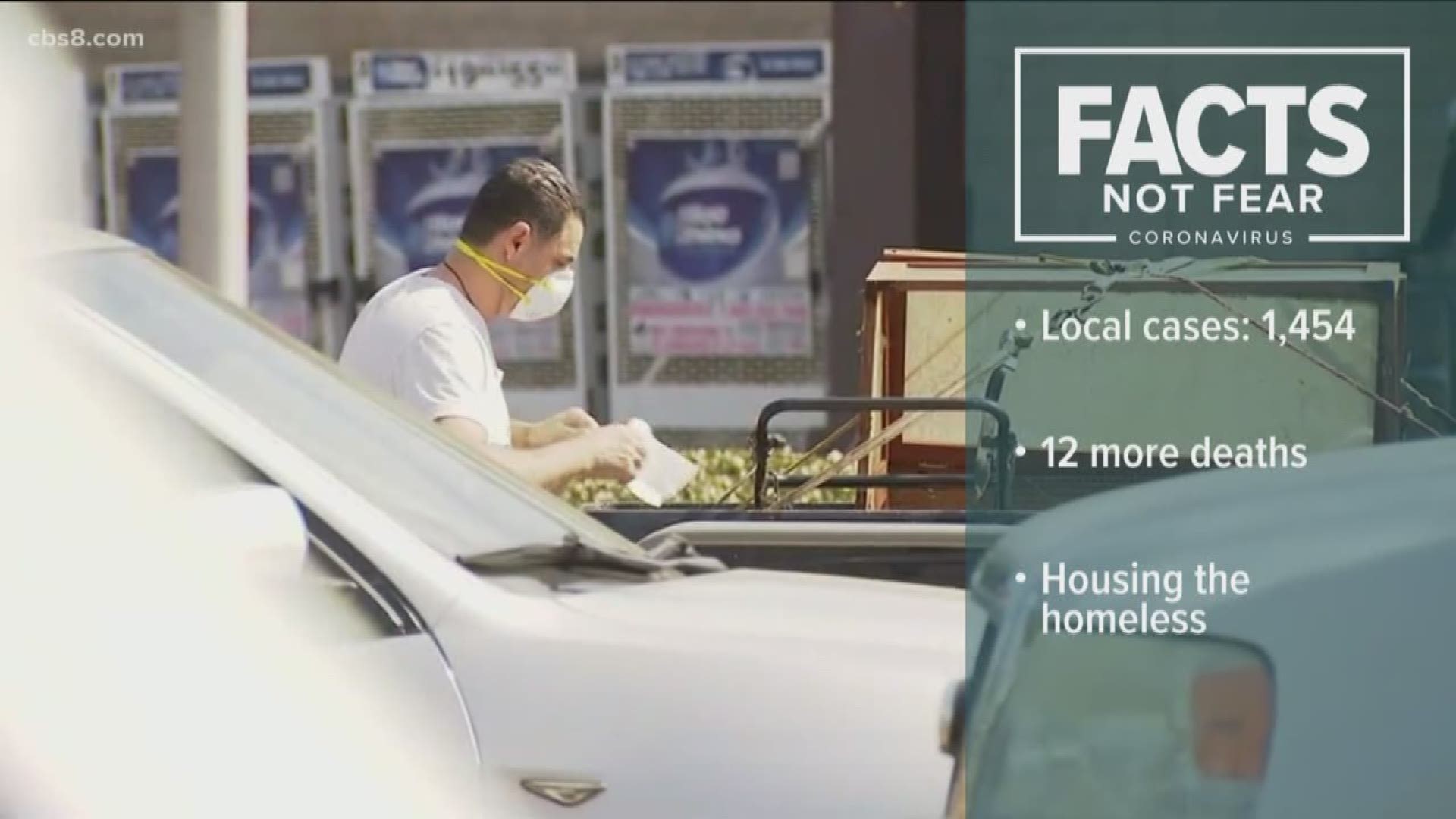 “The actions that we’re taking are having an impact,” said Fletcher.

1,454 people in San Diego County have tested positive, but a little less than 300 more people are under investigation. 19.9 % of those people that tested positive have been hospitalized.

Additionally, 31 people have died of COVID-19 in San Diego County, an increase of 12 compared to Monday.

"The increase in deaths should be no cause for alarm as the number of deaths typically lag behind the number of positive cases reported," said Wooten.

Wooten later added that health officials need to corroborate the death certificate with a report to officially add a death to the publicized total.

"Our sincerest sympathies and condolences go out to the families and friends of those individuals," said Wooten.

Fletcher announced that starting on Wednesday, San Diego County will begin breaking down data not just by sex, but also by race.

It's estimated that 201 people have recovered from COVID-19 in the county, meaning they initially tested positive, then tested negative 14 days later.

Authorities Tuesday will begin citing essential businesses that have not complied with the requirement to post social- distancing and sanitization guidelines near the entrance of their businesses.

All employees of grocery stores, pharmacies, restaurants open for to- go orders, fast-food eateries, convenience stores and gas stations must also wear a facial covering at all times as part of a county health order that went into effect at midnight on Saturday.

Although the county is not mandating that residents wear face coverings, essential businesses can deny entry to customers whose faces are not covered, Fletcher said Monday.

"If an individual business chooses to say that you need to have a face covering to come into their business, that is a determination that those businesses can make," he said.

Almost 100,000 PPE has been distributed within the last 24 hours to San Diego County hospitals.

The number of San Diego County COVID-19 cases rose by 78 on Monday, reaching a total of 1,404. The number of county deaths remains at 19.

Deaths are considered a "lagging indicator" in epidemics, so the report of no new deaths doesn't necessarily mean there have not been additional fatalities, said Dr. Eric McDonald, county director of epidemiology. He said causes of death in some cases might still be under investigation.

As of Monday, the county had 537 ventilators available for use, Fletcher said.

A total of 269 COVID-19 patients have been hospitalized at some point, including 102 in intensive care. The total number of COVID-19 patients currently in the hospital was not immediately known, McDonald said.

Fletcher announced that -- responding to public input and interest -- the county will begin releasing case numbers by race/ethnicity in its evening updates. Monday's numbers, excluding 405 positive cases in which race was not identified, showed that 49% of positive cases occurred in white individuals, 30.7% in Latinos and the remaining cases fell among Asian, black, Pacific Islander, American Indian and mixed-race San Diego County residents.

"This tracks very closely with the broader demographics of the county," Fletcher said.

Supervisor Greg Cox said Monday the county has increased the services it provides to senior and homebound residents, with meals from the Aging & Independent Services agency increasing by 92% over the last three weeks.

He said seniors can access services by calling 800-339-4661, and elder- or dependent adult-abuse could be reported at that same number.

Fletcher said the shelter-at-home orders were particularly difficult for seniors.

"Reach out to senior citizens, whether they be family members or coworkers," he said. "Give some encouragement, support and help. The burden is much greater for them. They are under a higher level of quarantine and were told to do it earlier."

Rob Sills, director of medical operations, said the county's stockpile of surgical masks and N95 respirators was sufficient but the supplies of face shields and non-permeable gowns were "critically low."

A survey released Monday by the Service Employees International Union Local 221 found that among 70 healthcare workers asked, nearly 90% reported they had no masks or had to reuse them to an unsafe degree.