2,158 people have tested positive total, which is a 71-case increase from the previous day. 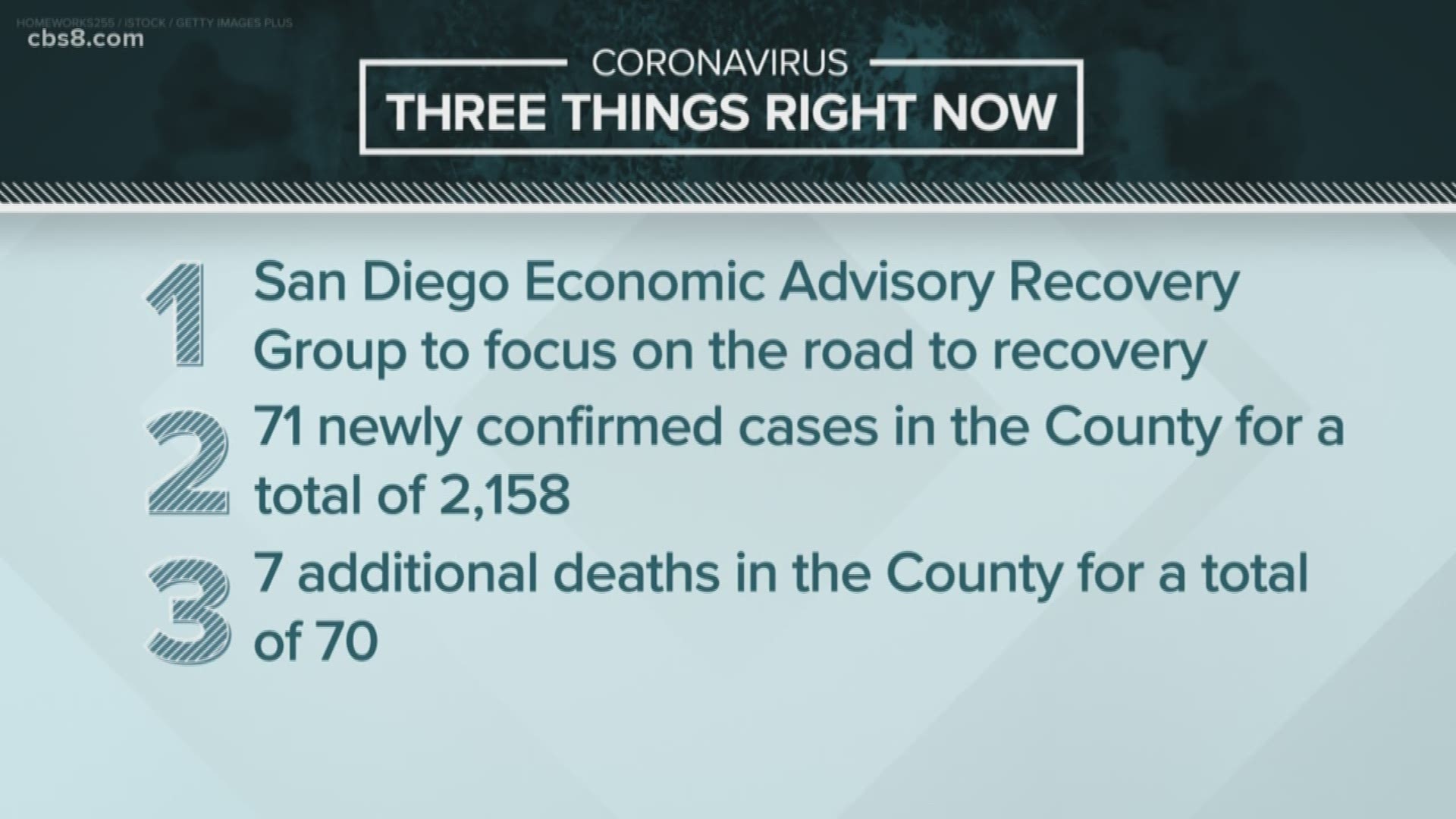 2,158 people have tested positive total, which is a 71-case increase from the previous day. 30,246 people total have been tested countywide.

70 people have died from COVID-19 in San Diego County. That number represents 3.2% of the total cases.

“We have certainly crossed the highway point,” said Fletcher.

“Until this numbers start going down, opening back up will be a challenge,” said Wooten.

“We can’t afford to blindly rush into anything,” said Cox.

There are 577 available ventilators in San Diego County with all 23 hospitals reporting as of Friday morning.

The county has created a lab task force to look at how the county can increase testing capacity.

“The sacrifice is a collective effort and it is indeed working,” said Wooten.

According to the Google mobility report, San Diego has slipped and received a C- grade for social distancing.

Travel to retail grocery stores and pharmacies increased by 11% of the pre-COVID-19 baseline, which Fletcher said might be expected as people may no longer be stockpiling groceries and thus needed to shop more often. However, transit station visits jumped by 6%, retail visits by 5% and park visits by 2%.

"We're seeing this slippage," he said. "I encourage you to hold fast."

Wooten, San Diego's Public Health Officer, said any plan to reopen the region would begin by meeting a set of metrics similar to that set by the state of California, including declining test percentages -- the county and local hospitals are still returning around 93% of all tests negative -- and declining incidences of flu-like illnesses in local emergency departments.

"We're not there yet," she said. "I use the word `yet' because if we lessen up, we could lose ground. We are not there yet, but we have made a tremendous stride and effort and we are getting there."

The number of hospitalizations increased to 524, an increase of 17 from Thursday. There have been 181 patients treated in intensive care units, the county reported. That number has not changed from Thursday's report, the first time that has been true in several weeks. Fletcher said the county estimates that 1,042 people have recovered from the illness, nearly half the total number of cases.

Fletcher said the county's "doubling rate" for hospitalizations was 12 days; ICU admittance was 18 days; and the days it would take to double the number of deaths was 7. The data is a five-day average model with outlier "smoothing" to give a better picture of the county's situation.

Of the deaths in which race/ethnicity was tracked, 53% were white, 36% Latino and 6.9% Asian. Race or ethnicity has not been established in 12 deaths.

Wooten confirmed one new community outbreak -- defined as three or more cases that can be traced back to one location and/or incident -- raising the county outbreak total to 36, tied to 397 cases and 41 deaths.

Fletcher reported COVID-19 tests have begun at the San Diego Convention Center, with a trial run of 53 tests completed Thursday. Of those, 34 were negative and 19 are still pending.