Sheriff Bill Gore will review the plan, and officials will also put out requests for proposals from private contractors to handle those duties. 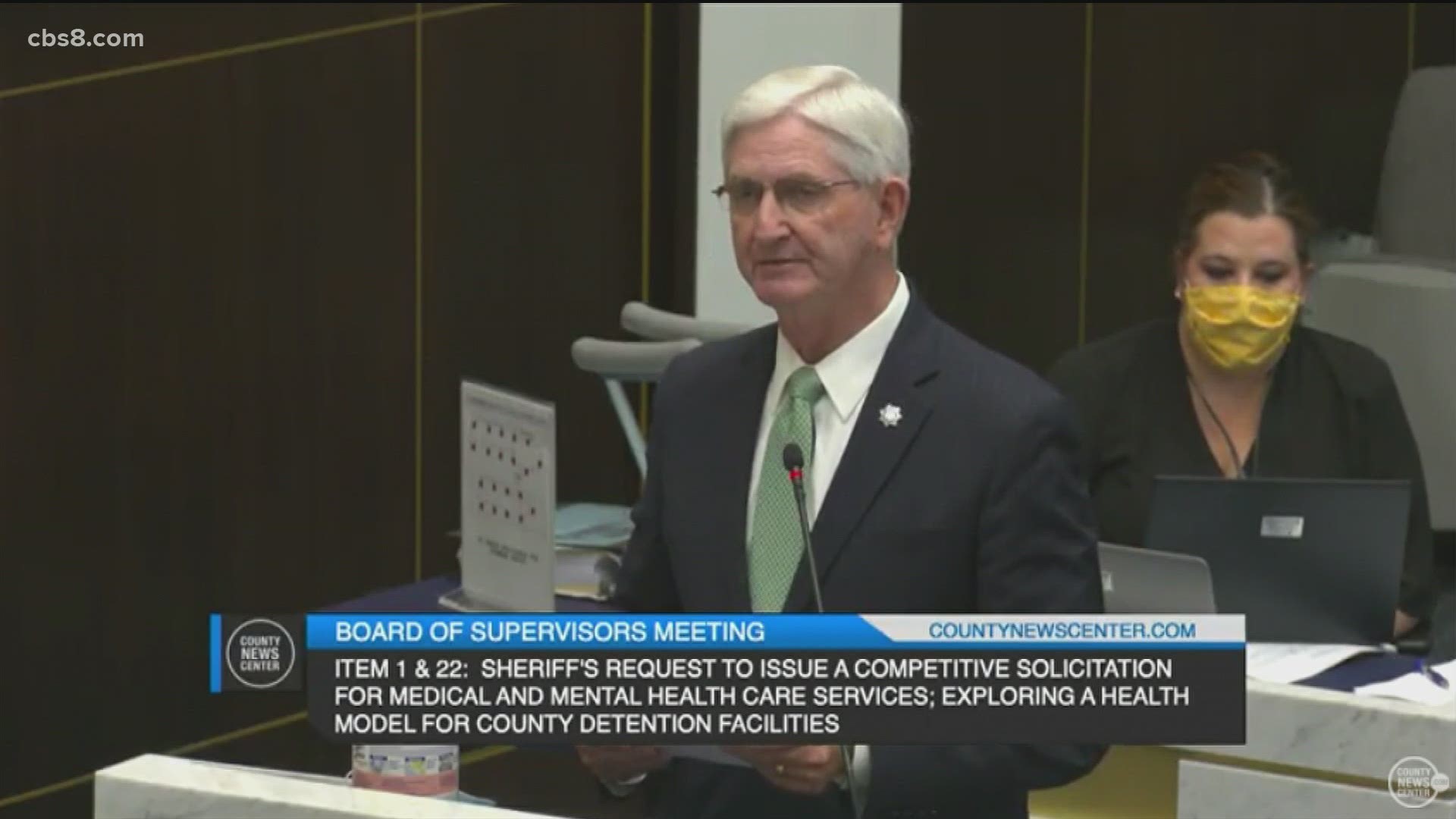 SAN DIEGO COUNTY, Calif. — San Diego County supervisors voted 4-1 on Tuesday to have the chief administrative officer direct the Health and Human Services Agency to develop a plan for in-house medical care of jail inmates and possible outsourcing of those duties as well.

Sheriff Bill Gore will review the plan, and officials will also put out requests for proposals from private contractors to handle those duties.

Supervisor Dianne Jacob made the motion to examine both an in-house model and outsourcing.

"I don't think we should go with just one approach," Jacob said, adding she is a proponent of outsourcing county services, if it results in good service for less money.

The board didn't give a timeframe for the proposals.

Gore has cited his department's $90 million annual health care bill for inmates as a reason to explore cost-saving strategies. He asked supervisors to consider possible vendors for the county's health care needs in its jails and other facilities.

Gore told supervisors that his goal was simply to get the best care at the best value, with an aging population of inmates and other serious issues.

He also praised the 300 men and women who provide medical care to inmates as outstanding employees.

Supervisor Nathan Fletcher, who is opposed to any privatization of services and proposed having HHSA handle inmate care, cast the lone no vote.

Before the board voted, Fletcher said outsourcing to a for-profit entity would not lead to a better outcome.

"As a board, we are the ones who are on the hook," in terms of lawsuits if an inmate doesn't get the appropriate care, Fletcher said. "We should have input."

Fletcher asked the board to vote on his proposal to have the HHSA administer medical and behavioral health services in jails, but the motion died for lack of a second.

"My concern is they will simply try to squeeze every dollar of profit they can by simply limiting the care and limiting the treatment that is given," Fletcher told News 8. "I think what we are doing is privatizing the profit and socializing the risk."

That risk, according to Fletcher, could be in potential lawsuits against the county if an inmate does not receive proper care, as well as increased rates of recidivism for inmates who don't get adequate care, especially for mental health or substance abuse issues, which he said would cost taxpayers more in the long run.

In a statement online, Fletcher said the board's decision was disappointing. "We haven't learned from the failures of other jurisdictions that have outsourced health care for incarcerated individuals to private, for-profit entities," he added. "Ultimately this is the sheriff's decision and he is clear on the path he is taking our county."

Board Chairman Greg Cox said he was encouraged that HHSA would develop its own proposal.

Cox praised both county medical employees and contractors for working in such a demanding field, but said the system right now is too bifurcated, adding that several legal items on Tuesday's closed-session agenda involved inmate care.

Supervisors voted after a lengthy public hearing, in which nearly every person who called was opposed to private outsourcing. Health care workers mentioned low morale at some detention facilities, and the risks workers are taking during the COVID-19 pandemic.

Most speakers identified themselves as members of Service Employees International Union, Local 221.

She said it was irresponsible to displace hundreds of employees during a pandemic.

David Garcias, SEIU Local 221 president, said although the majority of supervisors "took a step toward a reckless path of handing taxpayer money to for-profit contractors, they also recognized the need to examine a restorative health care model as an option."

Garcias added SEIU and its allies "will exhaust every possible option" to stop Gore's proposal.