Some activists have praised the timely release of footage from an officer-involved shooting that took place in downtown San Diego Saturday evening. 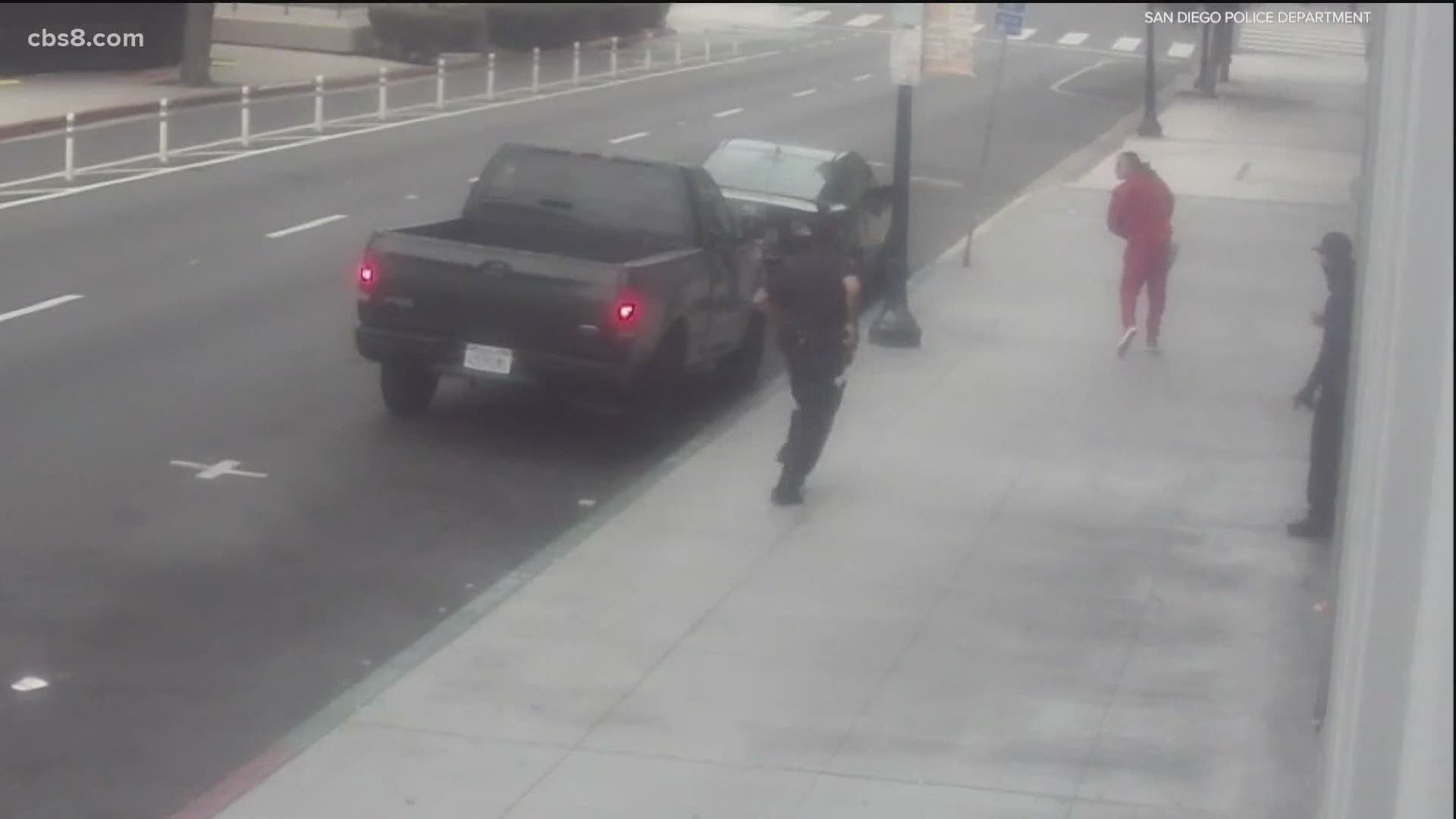 SAN DIEGO — Content warning: The SDPD video featured in this story may not be suitable for all viewers.

The San Diego Police Department earned praise from fierce critics after it released footage from multiple angles, including officers’ body-worn cameras, of an officer-involved shooting Saturday evening within 24 hours.

Officers said they were driving and recognized Leonardo Ibarra, 25, from a wanted poster. As they stopped and approached him, Ibarra pulled out what was later revealed to be a gun wrapped in a camouflage cloth. Both officers opened fire, hitting Ibarra several times. He was taken to an area hospital with life-threatening injuries.

Protesters arrived at the scene within hours to demand transparency in the investigation.

“I want to commend the SDPD on their quick, expedient leadership in getting the body-worn camera footage released,” said Shane Harris with the People’s Alliance for Justice. “That transparency builds bridges with communities most affected.”

Harris said he wants police to commit to releasing video of all officer-involved shootings within 72 hours.

The Coalition for Police Accountability and Transparency also called for an independent investigation. Investigators from the SDPD Homicide Unit responded to the scene. The San Diego County District Attorney’s Office will then review the evidence and determine if the officers bear any criminal liability. The Community Review Board will also review the shooting. The police department said the U.S. Department of Justice and FBI are monitoring.

The shooting occurred just a few days after San Diego police mandated officers attempt, when possible, to de-escalate a situation and use lethal force as a last resort. The San Diego City Council, mayor and police chief also recently backed a ballot measure to create a new “Commission on Police Practices,” which would replace the CRB and have subpoena power and independent legal counsel.

“Our thoughts are with the family of Leonardo Hurtado Ibarra during this difficult time. Many of the details of the shooting and what preceded it are still being assessed. CPAT supports calls for San Diego Police Department (SDPD) and the San Diego County District Attorney (DA) to provide the public with answers expeditiously; and to be accountable and transparent in all aspects of their handling of the shooting.

In the last weeks, we have seen community uprisings throughout the San Diego region, state and nation following the killing of George Floyd by police officers in Minneapolis. In response to this moment, CPAT is calling on our local elected officials to pass the Police Accountability Now policy package, which offers a meaningful starting point to address biased policing and to invest in healthy and sustainable communities. This shooting is a reminder of the need for a transformative approach, not piecemeal method, to policing reform.

Finally, we urge all law enforcement agencies to exercise compassion and restraint in protecting people’s constitutional rights and to not overreact to peaceful public protest with militarized policing.”

The NAACP San Diego Branch released the following statement on the video release on Tuesday:

"We feel the timing of the release of the video from Saturday’s shooting is a step toward building a bridge to the community of color, who have lost so much faith in the San Diego Police Department.  We are gratified to hear that the investigation will be independent, and not merely the Department investigating itself.  We applaud the speed with which the SDPD obeyed AB 738 and SB 1421, which call for prompt release of video evidence as well as information about investigations.

We would prefer not to think that this information was released so quickly only because the SDPD believes it 'exonerates' their officers.  We hope instead this is a sign that the San Diego Police Department hears what the community is saying, and that this sort of prompt release of information will become the norm.

Regarding the video itself, we will be interested to hear the results of the investigation.  We are always told that officers must make life or death decisions in a 'split second,' but we see a period of ten seconds where the officers might have used less-than-lethal methods, such as a taser, to disarm this suspect."

Many have asked why is there no sound in some of the video released. Below is the reason given by SDPD:

SDPD’s body-worn cameras continuously record video, but not audio in constant two-minute loops. Once an officer activates their camera, it saves the two minutes of video leading up to the moment it is activated and records all video and audio from that point forward.