Statewide Flex Alert issued through Wednesday, rotating outages could begin as early as 2 p.m. on Monday

SDG&E said there is a high likelihood that CASIO would order SDG&E to implement widespread rotating outages as early as 2 p.m. 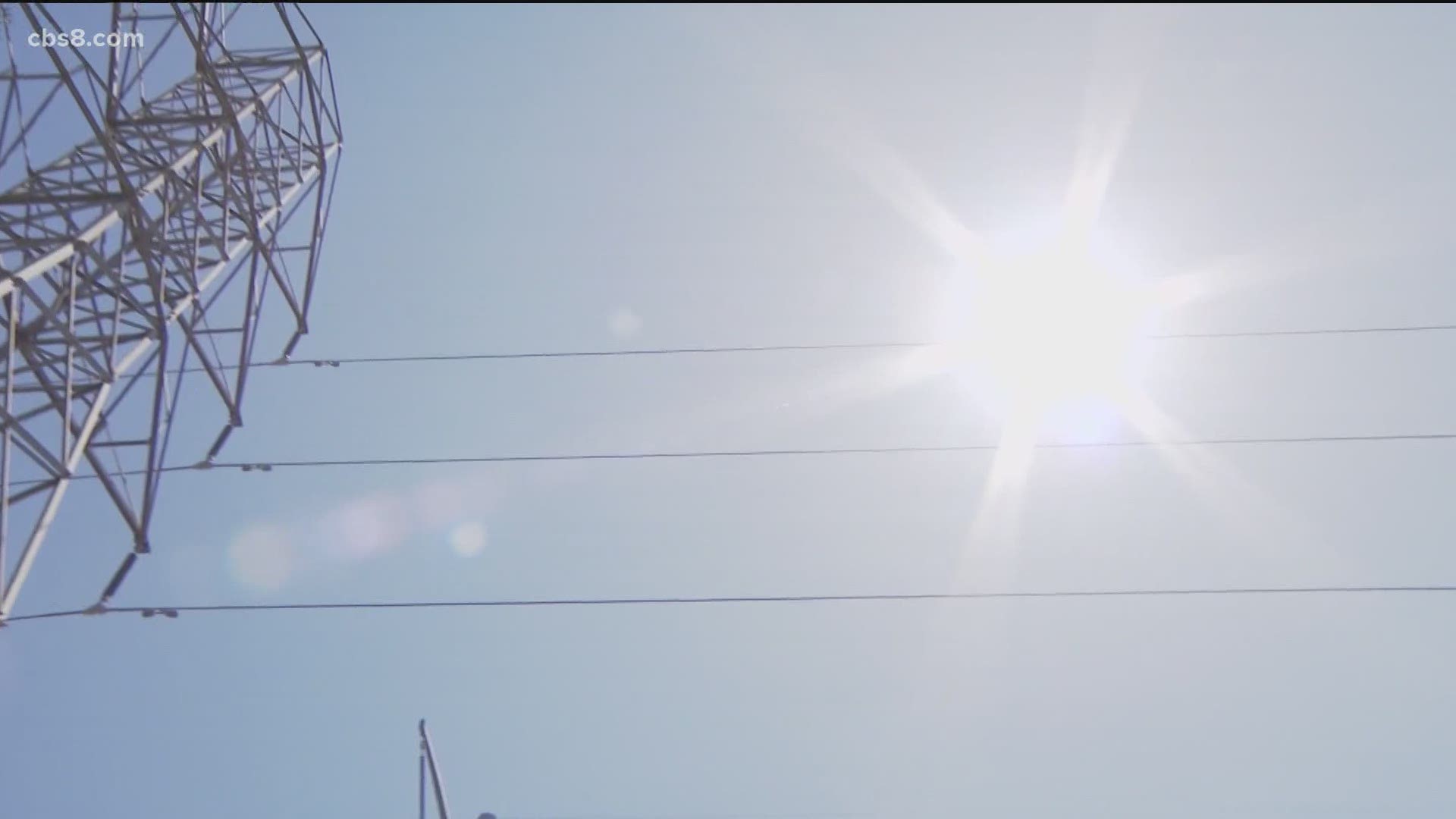 On Monday afternoon, SDG&E was notified that the state may begin to implement widespread rotating outages as early as 2 p.m. on Tuesday.

To find out if your home or business may potentially be affected, you will need to match your circuit number from your SDG&E bill to the list of communities and circuits that are expected to be impacted if asked to initiate rotating outages each day.

"A persistent, record-breaking heatwave in California and the western states is causing a strain on supplies, and consumers should be prepared for likely rolling outages during the late afternoons and early evenings through Wednesday," the agency said. "There is not a sufficient amount of energy to meet the high amounts of demand during the heatwave. However, consumers can actively help by shifting energy use to morning and nighttime hours and conserving as much energy as possible during the late afternoon and evening hours."

In an effort to prevent or limit power outages during this heat wave, the California #ISO issued a statewide #FlexAlert for today - Wednesday, Aug. 19, from 3 p.m. to 10 p.m. Learn more: https://t.co/U5yYGRfQjT pic.twitter.com/mJCmqLPHnq

On Sunday, the Cal-ISO electrical grid status showed demand statewide was at 40,648 megawatts, with total capacity at 53,336 mw and the forecast peak at 45,669 mw. A megawatt is a unit of power equal to one million watts.

"To help avoid further rotating outages, we are encouraging customers to conserve energy as much as they can. If conditions do not improve, it’s likely we could experience additional rotating outages throughout the duration of this heatwave," a statement from San Diego Gas & Electric read in part.

"We're all at home right now due to the COVID  pandemic, and we are also dealing with hot temperatures," said SDG&E spokesperson Jessica Packard, calling this a "call to action" to try to save power. "We all need to act together as a team to conserve as much as we can, for the greater good of all of us."

SDG&E said if outages were called for it would make "every effort to notify customers with as much notice as possible" via news outlets, social media, sdge.com and phone calls.

Temperatures are continuing to rise and so is the demand on the power grid. Conservation remains extremely important. Here are immediate energy-saving tips you can use to help reduce stress on the power grid. More at https://t.co/yskPIO8q3K. pic.twitter.com/Kh56TaF8CB

"We're trying to alert our customers even before we've been given this order," Packard added.

Cal-ISO said consumer conservation can help lower demand and avoid further actions including outages, and lessen the duration of an outage.

"Consumers are urged to lower energy use during the most critical time of the day, 3 p.m. to 10 p.m., when temperatures remain high and solar production is falling due to the sun setting," Cal-ISO said. "Extended periods of heat also can cause generator equipment failures that can lead to more serious unplanned losses of power."

Between 3 p.m. and 10 p.m., the ISO is urging consumers to:
-- Set air conditioning thermostats to 78 degrees, if health permits;
-- Defer use of major appliances;
-- Turn off unnecessary lights;
-- Unplug unused electrical devices;
-- Close blinds and drapes and;
-- Use fans when possible.

Consumers can also take steps to prepare for the Flex Alert by doing the following before 3 p.m.:

"Pre-cool" their homes, or lower air conditioning thermostats to 72 degrees, charge electric vehicles, charge mobile devices and laptops, run dishwashers, washing machines and other major appliances and set pool pumps to run in the early morning or late at night.

The California ISO also declared an emergency at 6:28 p.m. Saturday for about 20 minutes, when rotating power outages occurred in some areas in San Diego County, many in North County.

"The load was ordered back online 20 minutes later as wind resources increased," Cal-ISO said. "Extreme heat throughout the West has increased electricity usage, causing a strain on the power grid. All available resources are needed to meet the growing demand."

SDG&E customers who experienced outages on Friday and communities in high fire threat districts were not affected by the Saturday outages.

The utility said customers impacted on Friday and Saturday and communities in high fire threat districts should not be impacted if rotating outages are called for Sunday.

"The goal is not to the same people  more than once," Packard told News 8. "However, that is not guaranteed."

Strong high pressure over the southwest will continue to bring very hot weather to Southern California through at least the middle of next week, the National Weather Service said.

A coastal eddy could bring some heat relief near the coast Sunday and Monday, but the heat will continue inland through Wednesday, forecasters said.

There will be more high clouds, along with some isolated to scattered thunderstorms, especially near the mountains in the afternoons and evenings, the NWS said.

If the @California_ISO calls on us to initiate rotating outages today thru Wed., here’s how you can locate your circuit # on your bill. Log on to MyAccount or our App to view your full bill. A list of the potentially impacted circuits for today is here: https://t.co/GFHJLYDjKz pic.twitter.com/SBDxn1sz6D