The wounded man was taken to a hospital with non-life-threatening injuries, police said. 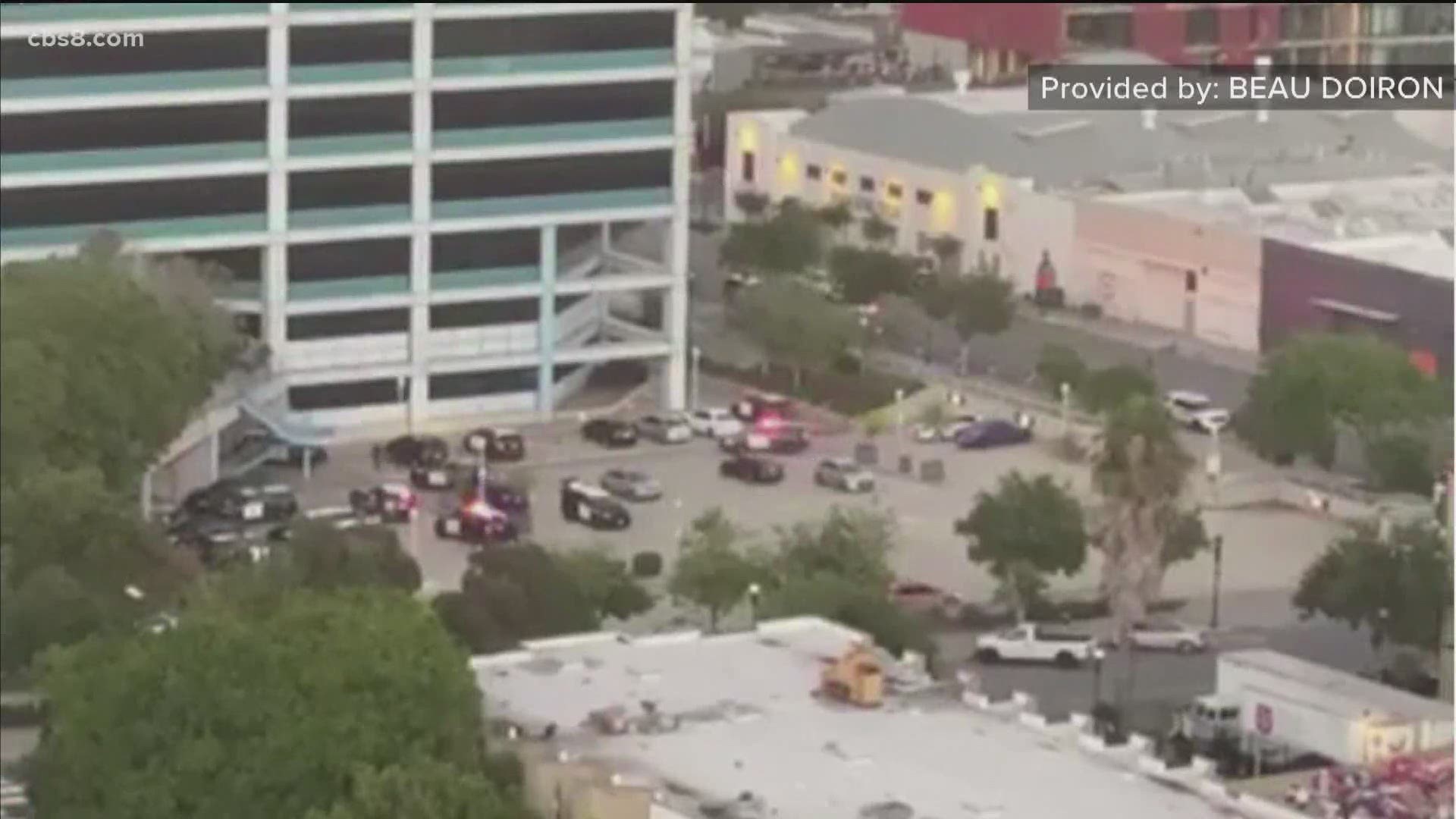 SAN DIEGO — San Diego police shot and wounded a 25-year-old man who slipped out of handcuffs while inside a patrol vehicle outside police headquarters, grabbed an officer's back-up gun and fired at least one round, police said Monday.

The 25-year-old man, whose name was not immediately available, was taken to a hospital for treatment of his injuries, which were not believed to be life-threatening, Brown said.

Shortly before 6:25 p.m. Sunday, officers responded to reports of a man causing a disturbance and threatening security personnel at a downtown hotel, the lieutenant said. The location of the hotel was not immediately available.

Officers arrived and found that a man had already been subdued by security, Brown said. The officers then transported the man to SDPD Headquarters for processing, the lieutenant said.

"While officers were away from their patrol SUV, the male slipped out of his handcuffs and broke a divider that separates the prisoner seat area from the cargo area," Brown said. "The male then got an officer's gear bag that contained a secondary weapon."

The officers returned to the patrol SUV, but noticed the man was armed with an officer's handgun so they backed away.

They gave the man commands to drop the weapon, but the man refused and fired at least one round from the handgun, Brown said. Three officers opened fire and struck the man at least once in the torso.

The man -- still armed with the gun -- opened the rear cargo compartment and the driver's door of the patrol vehicle, then attempted to flee on foot.

A short time later, officers deployed a police dog, which bit the man, who was then taken into custody, Brown said.

No officers were injured.

The NAACP San Diego Branch issued the following statement on the shooting on Monday:

"Last night around 8pm, a Latino man was left in a San Diego Police Department squad car outside the Sally Port.  He managed to slip his handcuffs and make his way into the trunk of the car.  There, he found an officer’s backpack with a spare weapon in it.  He took this weapon and then returned to the back seat of the vehicle.

When SDPD officers noticed the gun, they began to converge on the vehicle.  They allegedly felt threatened and opened fire on the man.  Next, they sent in a police dog to attack the injured man.

Now this 25-year-old man is injured and his family is traumatized.  Who knows how many others were in the area when the shooting occurred, who may have been struck by a stray bullet.  All because a man was left unsupervised in a vehicle in a crowded area.

There have been far too many dangerous incidents around the Sally Port.  It is up to Mayor Faulconer and the City Council to take control of the situation and get the SDPD to do the right thing.

We call on the US Attorney and FBI, who are already investigating officer-involved-shootings in the SDPD, to do a complete investigation of:

The Sally Port and associated policies and procedures, with a view toward the safety of officers, detainees, and the public at large.

Policies and procedures that allow detainees to be left unsupervised in vehicles, especially in highly-trafficked areas.

Policies and procedures regarding “backup weapons;” whether they are permitted and how they must be secured if permitted.

We offer our thoughts and prayers to the injured man’s family and friends."