Shayla Piccini said she was handcuffed and detained but wasn't charged. No officers have been put on leave due to the incident. 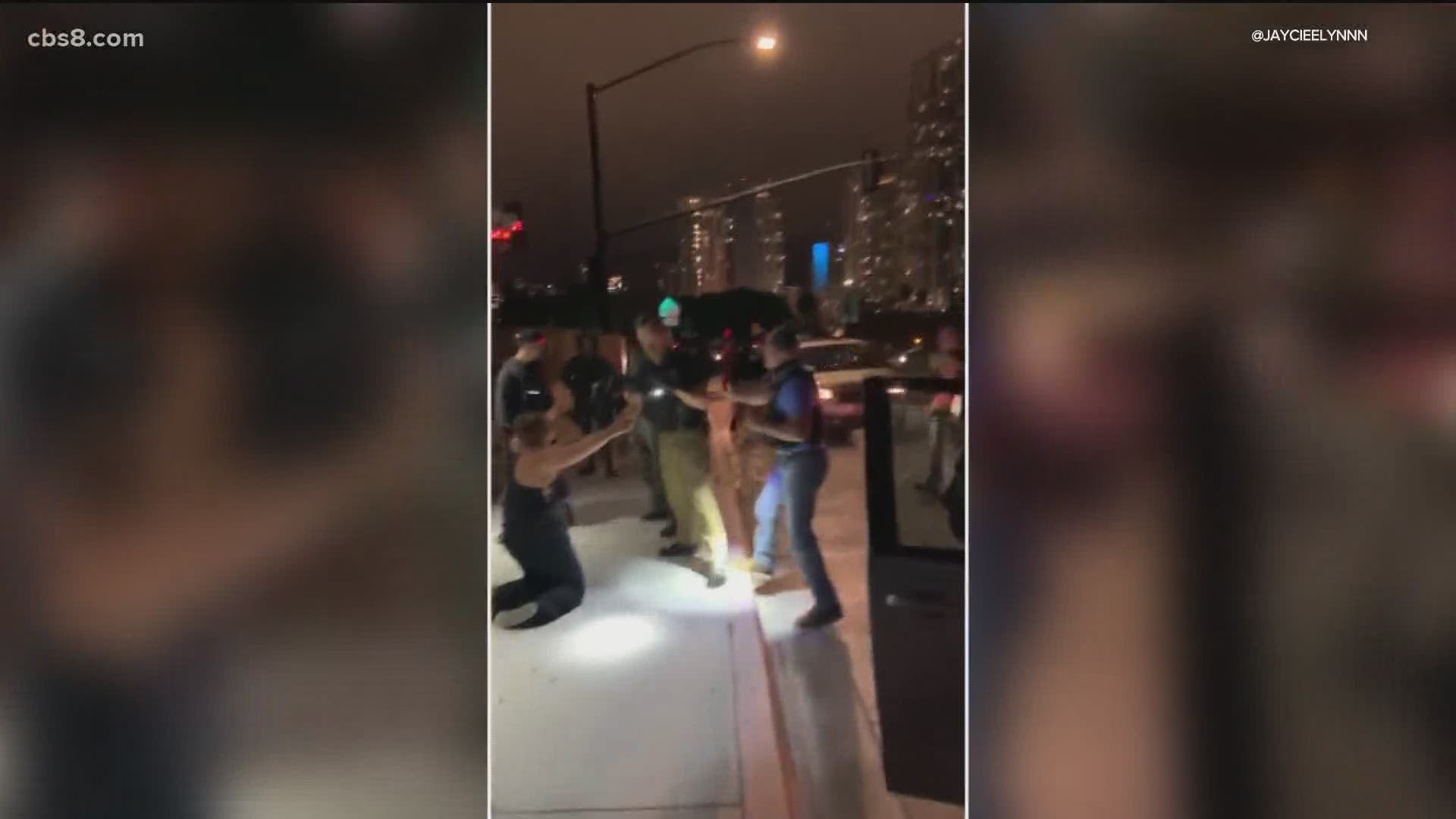 Piccini told News 8 she was walking near San Diego High School when she stepped into the bike lane to wave her protest sign at a motorcycle officer. That’s when the 20-year-old said an unmarked van approached her from behind.

“Five men came out of the car just screaming, 'get on the ground, get on the ground' and honestly next thing you know I’m in the van with five men and I don’t know where I’m going,” said Piccini.

Cell phone video, which has since gone viral, shows the commotion that followed after the group she was with saw her being handcuffed on the ground and taken away to a nearby van by men who were not wearing identifiable police uniforms.

“I didn’t even know they were the police at the time,” said Brandi Matthews, Piccini’s cousin who was with her when the incident happened.

“They’re all dressed in all different clothing, different uniforms, some of them in plain clothes,” she said.

“It was just really terrifying to feel like my cousin was getting stolen by people who had guns pointed at her,” Matthews said.

News 8 has since confirmed the officers are members of SDPD’s SWAT team.

In the video you can hear one of them saying: “If you follow us, you will get shot, you hear me.”

“When he said the words, ‘I’ll shoot you’, I automatically just dropped to my knees to try and demonstrate I’m not trying to hurt anybody,” said Matthews.

Piccini said she was detained for 12 hours but initially didn’t even know by who.

“I was asking several questions, 'who are you?' 'where are you taking me?' and I was getting stares and no answers,” she said.

San Diego Police released the statement below on Sunday regarding the incident.

News 8 followed up after Monday's interview, but a spokesperson said no further comment would be given due to an ongoing internal affairs investigation.

They also added no officers have been put on leave due to the incident.

"We are aware of a video posted to social media which has raised concerns in the community. Last night at about 9:20 p.m. in the area of 1400 Park Blvd, the San Diego Police Department was facilitating a protest march that had begun earlier in the day. An unmarked van occupied by several police detectives dressed in plain clothes was parked and watching the march. A detective witnessed a woman step off of the sidewalk into the roadway and swing a cardboard sign at a passing SDPD motorcycle officer. After seeing what occurred, the detective drove up to the woman and placed her under arrest. Due to the large crowd still in the area, the detectives felt the need to immediately leave the area. Several members of our SWAT team also arrived as the arrest was being made and prepared to de-escalate the situation. Police officers are trained to announce the use of force whenever possible.

We understand the concerns when arrests are made by detectives who may not be easily identifiable. In this incident, the crime occurred in front of our detectives and uniformed officers were not available."

“I felt like I genuinely had no idea what was happening,” Piccini said. “So, I was obviously scared and frightened for my life and scared for my family too. They don’t know what’s happening or where I’m going. Just a lot of fear and a lot of trauma.” 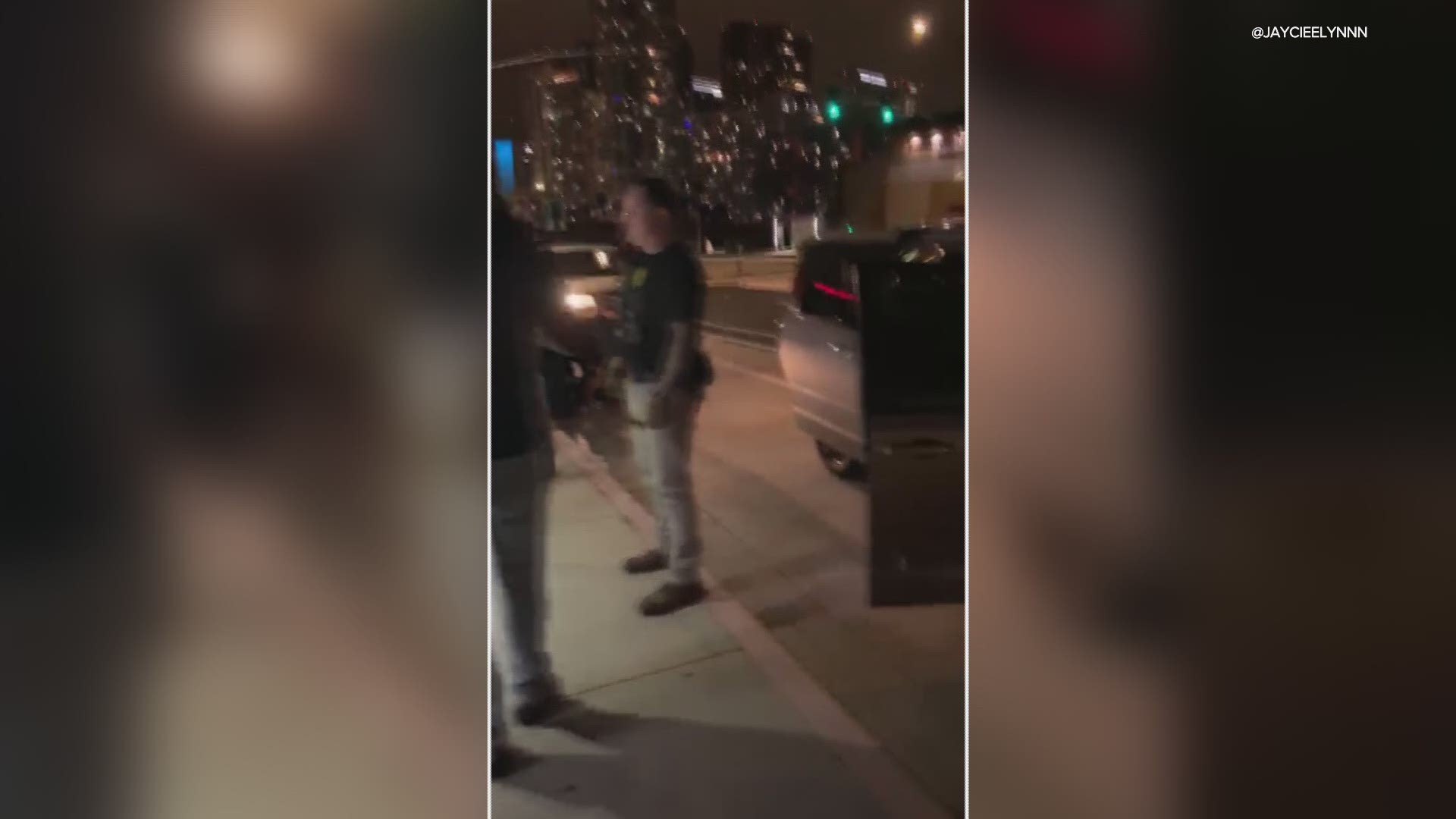