The mayor says part of the program will allow for the $1,000 fee to be waived for special event permits. 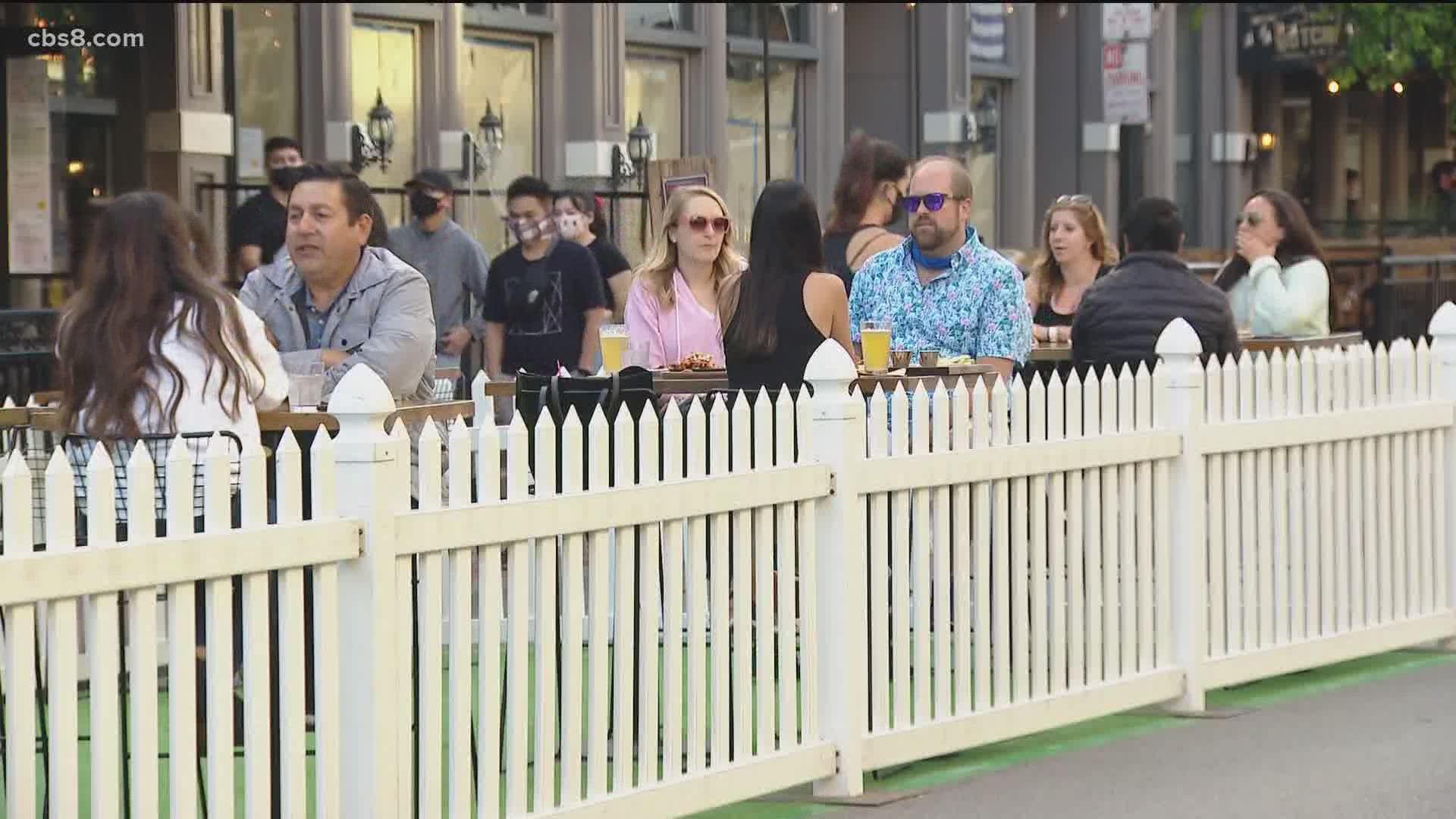 SAN DIEGO — Social distancing is at the center of a new outdoor dining experience across the City of San Diego.

On Thursday, Mayor Kevin Faulconer announced a new plan that would allow restaurants and retail shops to expand their dining rooms outside. The program kicked off in Little Italy last weekend and it will begin in the Gaslamp Quarter Thursday afternoon.

Michael Trimble of the Gaslamp Quarter Association said, “People have been cooped up for a long time, and we believe people are ready to come out and enjoy San Diego and the Gaslamp Quarter. We worked hard for many months to get this project launched so we could help the businesses come back to somewhat normalcy.”

The mayor said part of the program will allow for fees being waived for special event permits. He said they typically cost $1000 and take months to process, but now the fees will be waived and can be approved in just days. Little Italy and the Gaslamp moved ahead and paid the fees. Faulconer says the city has created an online portal to accept applications.

Faulconer went on to say that allowing restaurants as well as retail to expand to the sidewalks and parking lots will help the small businesses make up for lost revenue. Restaurants are still required to only allow 50% capacity as part of the reopening plan.

The outdoor dining will start at G Street in the Gaslamp and will extend all the way to L street along 5th Avenue making each individual block its own open area.

Diners on the first night say the idea is appetizing.

"I love it, we want it to be this way permanently," said Sandy Keener, downtown resident.

Street diners said they like being able to meet for happy hour and feel safe.

"It’s a nice way to get out but keep the social distancing," said Roya Afghan.

"I think the beach communities need to be doing it a lot more," said Tim Fraser, diner.

RELATED: Open-air dining idea on the table in North Park

Though city leaders indicated Little Italy's al fresco dining was a success on Saturday, there were some complaints.

"The most complaints we got were people not wearing masks," said Steve Galasso of Caffe Italia. "So please show us you care when you come down Saturday wear a mask."

Meanwhile -- images of the Gaslamp Quarter last weekend showed lots of people not wearing masks and no social distancing.

Some said its too soon to head back to the bars.

"Personally, I wouldn't, but I think it's up to the individual," said Isaiah Mojsea.

He said social distancing stickers on the floors of bars or even barriers may not make a difference.

"I think it's well-intentioned, but whether or not it's effective is another question," he said.

Diners said it's their responsibility to make sure they do their part as well.

"We can still go out, we can still can enjoy our food and enjoy our drinks as long as we are responsible about it," said Fraser.

San Diego police say they will have officers back on patrol who were assigned to the Gaslamp pre-COVID-19, responding to alcohol-related crimes. They will also have VICE detectives responding to compliance complaints made to 211.

The mayor's emergency ordinance will go the city council for a vote on July 7.

Under the mayor's proposal live music, bands, dancing will not be allowed because his staff says mass social gatherings are not encouraged.

Street dining is on the menu in the Gaslamp Quarter. The mayor wants to wave fees for street, parking lot and public right of way closures to allow other communities to expand so people can safely dine and boost business to serve at full capacity.