Legislation passed during the 87th Legislature goes into effect on September 1. 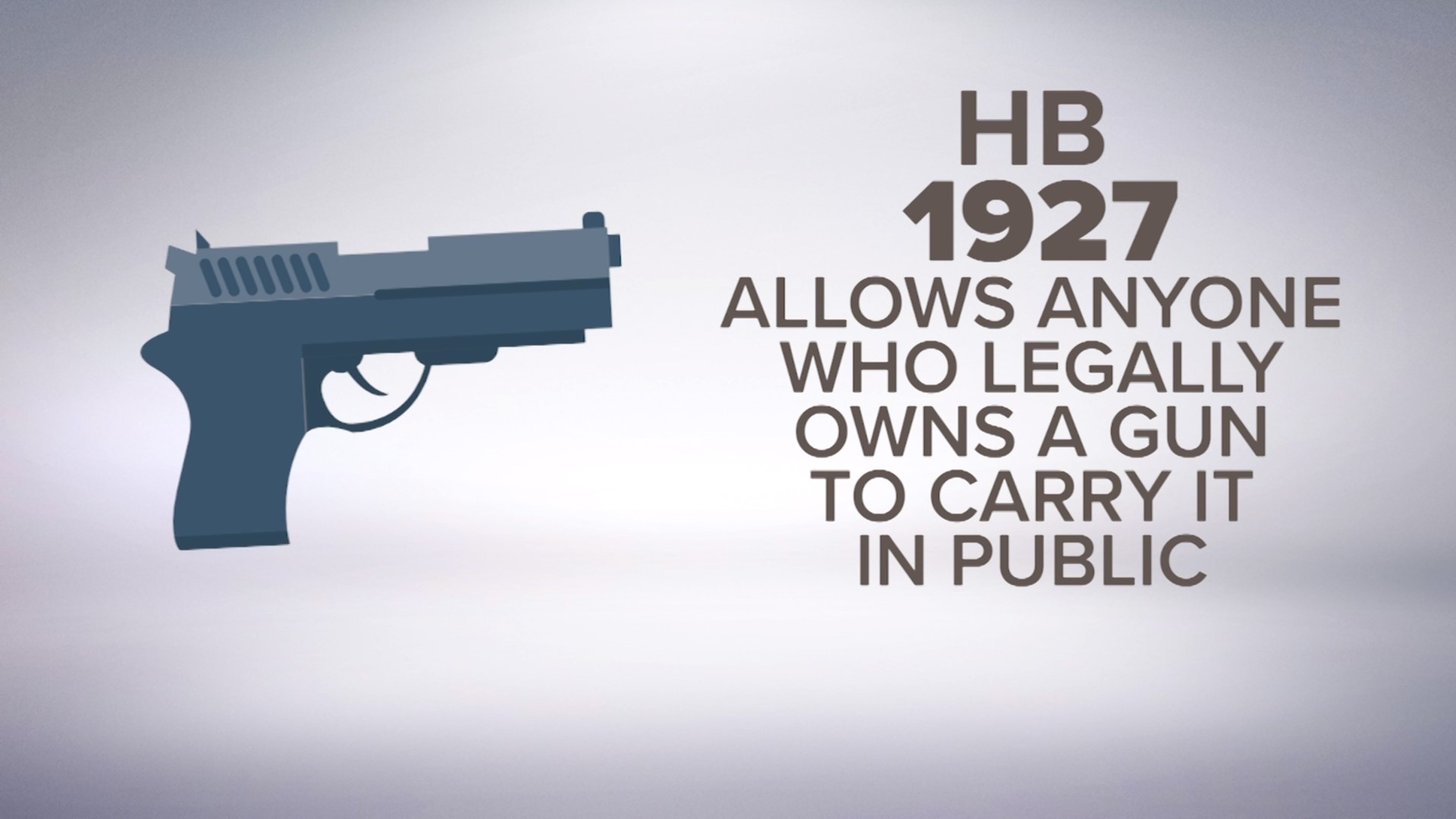 HOUSTON — As of Sept. 1, Texas has a handful of new laws you need to know about.

The most high-profile of the new legislation is arguably permitless carry (or constitutional carry). Starting on the first of September, House Bill 1927 allows anyone who legally owns a gun to carry it in public. No license or training is needed. According to ProCon.org, Texas is one of 19 states with a similar law.

The also controversial so-called “heartbeat bill” takes effect on Sept. 1. Senate Bill 8 bans abortions after a fetal heartbeat has been detected. That can sometimes happen as early as five weeks after a missed period. There is an exception in the law for medical emergencies.

More Texans will have access to medical marijuana as a result of House Bill 1535’s passage. Along with extending qualifications, the law also increases the dosage limit from .5% THC to 1% THC.

Sunday brunch just got a little saucier. House Bill 1518 lets you buy beer and wine at 10 a.m. on Sundays. You used to have to wait until noon. Liquor sales are still off-limits on Sundays.

You’ll hear the “Star-Spangled Banner” before any game involving a pro sports team that contracts with the state. Senate Bill 4 requires it.

A couple more to highlight:

666 new Texas laws go into effect Sept. 1. Here are some others that might affect you.

The Texas Tribune reports on these other new Texas laws:

Not every bill signed into law during the regular session will go into effect Sept. 1. Some bills went into effect as soon as they were signed. For example, Senate Bill 968, which banned “vaccine passports” in Texas, became law when Gov. Greg Abbott signed it in June. Other bills, like one that revises eminent domain negotiations between landowners and companies, will become law on Jan. 1, 2022.

The legislature is currently in its second special session, which Abbott primarily called to advance the GOP-backed voting restrictions bill. Lawmakers are discussing other topics, including changes to the bail system and limits on transgender Texans from competing on school sports teams. At least one more special session will be called this fall to address redistricting.

But in the meantime, here’s a list of other new laws you should know:

Texas’ 2022-2023 budget: SB 1 provides nearly $250 billion for Texas, with notable funds going toward public higher education. Abbott line-item vetoed the part of the budget that funds the Texas Legislature and the people who staff it — but lawmakers may restore funding during this summer’s second special session.

Reducing barriers to SNAP: SB 224 simplifies access to the Supplemental Nutrition Assistance Program for seniors and disabled people on fixed incomes. Eligible individuals can forgo enrollment interviews and have a shortened application process.

Funding the “1836 Project”: HB 2497 establishes an “1836 Project” committee to produce patriotic Texas history materials, which will be distributed through channels such as when people receive driver’s licenses. The initiative’s name mirrors the “1619 Project,” a New York Times publication examining U.S. history from the arrival of enslaved people.

Shielding companies from car crash liability: HB 19 requires drivers of commercial vehicles — including Ubers, Lyfts and delivery trucks — to be found liable in court for causing a car crash resulting in injury or death before a case can be brought against their employer.

Active shooter alert system: HB 103 creates the Texas Active Shooter Alert System, which will notify Texans in the vicinity of an active shooting scene through their phones. The system can be activated by request of local law enforcement.

Police body cameras: HB 929 requires police officers to keep body cameras on during the entirety of active investigations. The law is named after Botham Jean, who was fatally shot in his apartment while eating ice cream by a Dallas police officer in 2018.

Banning unnecessary police chokeholds: Police officers are now prohibited from using chokeholds or excessive force during arrests unless necessary to prevent officer or bystander injury under SB 69. Officers who witness violations are required to report the incident.

Punishing cities who cut police budgets: If municipalities with a population of more than 250,000 reduce their police budget, HB 1900 allows the state to financially punish the cities by reducing sales tax revenues and preventing increases in property taxes.

Criminalizing homeless camping: HB 1925 makes camping in unapproved public places a misdemeanor crime that carries a fine of up to $500. Cities cannot opt out of the ban.

The Texas Tribune contributed to a portion of this story