More than 100 people gathered for a rally on Wednesday. 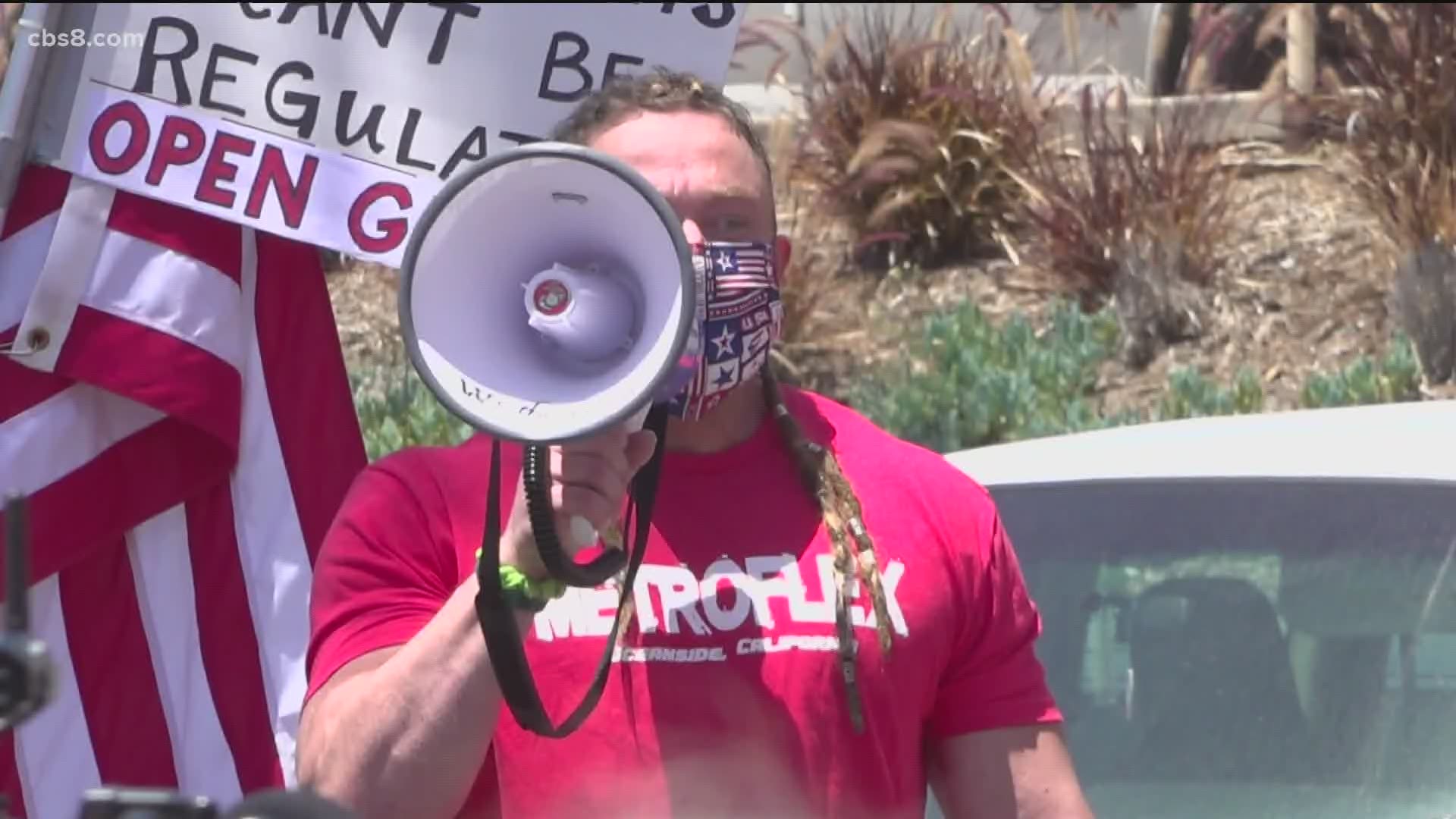 The person spearheading the effort was gym owner Lou Uridel. He owns Metroflex Gym. He was cited over the weekend for reopening his business,  which is against the county health order.

"This is the time to be courageous in the face of fear, to open our businesses and not be afraid," Uridel told the crowd on Wednesday.

Shaun Frederickson was among the faces in the crowd. He said his photography business was forced to close.

"I've had two months of no income," said Frederickson. "I would love to get back to work [and] take care of my family. I've got a wife and two kids. She's bearing my third child in three weeks and I don't have a job right now because my company has been closed down."

Today's rally was held just days after controversy erupted in Oceanside between council member Christopher Rodriguez and Mayor Peter Weiss, with Rodriguez calling on businesses in Oceanside to violate the county health order and reopen.

On Wednesday, Mayor Weiss told News 8 he would love for people to reopen their businesses, but he said he doesn't have the authority to tell people to violate the stay-at-home order.

"I think everybody wants to open," said Cynthia Trujillo, the owner of Reap and Sow, an apothecary boutique on Highway 101.

She said business is down 80%. She doesn't agree with all the controversy. However, she said Rodriguez's message is something she and many fellow business owners agree with.

"I haven't heard anybody saying 'I don't want to open.' Everyone really wants to get back into business," she said.

However, across the street at Design Nails & Spa, owner Hope Tran said she doesn't mind waiting to reopen. She said she wants to follow Governor Newsom's guidelines closely because it's a matter of safety.

"I have children. I have three kids," she said. "I don't want to go home and give it to them."

Meanwhile, the Oceanside Chamber of Commerce sent this letter to Mayor Weiss and the city council earlier this week:

In recent weeks, the Chamber has expressed its strong support for allowing more businesses to open and operate within current County health guidelines. As each day passes, the chance for our small businesses to survive this pandemic is significantly diminished. As you probably understand, we are now at the point where many of our Oceanside businesses will never reopen.

The negative impact of the extended closure of businesses will be felt on our citizens' lives, overall public health and the quality of life in Oceanside for many years to come. Due to their resilience, many of our business owners are still choosing to fight for the businesses they have sacrificed so much to build.

I am writing today in regard to the disturbing situation that took place this past weekend with the arrest of an Oceanside business owner, Louis Uridel. Mr. Uridel is the owner of MetroFlex Gym and was making an effort to save his business while operating within County health guidelines.

In a time when public trust in government is on incredibly shaky ground, this arrest was a demonstration of policy overreach by local officials. It is important to remember that without economic activity, we will have tremendous limits on local services, not the least of which will be public safety.

We urge the Council to do everything possible to support our small business owners in their efforts to save their businesses and provide jobs for our citizens.