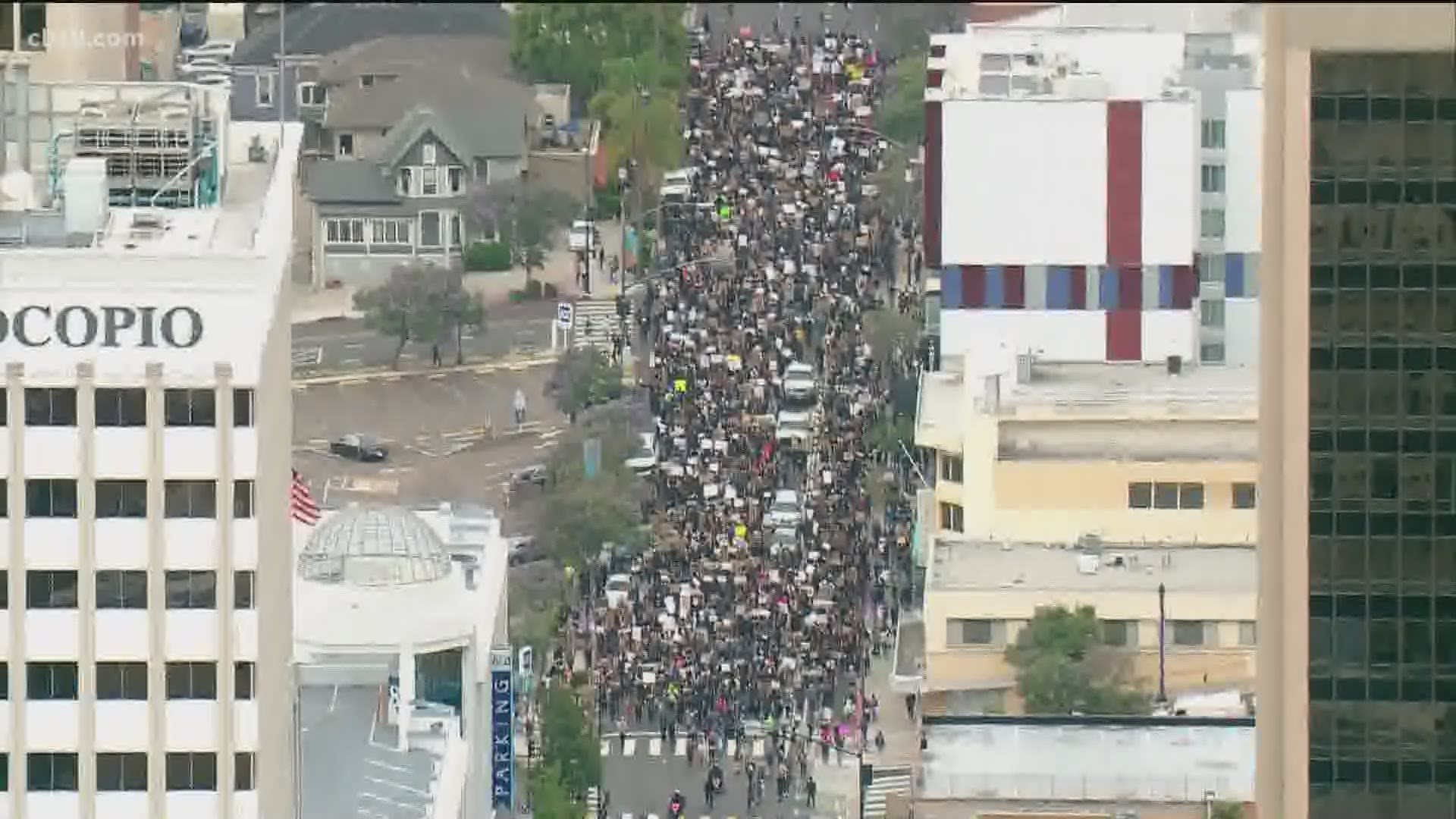 SAN DIEGO COUNTY, Calif. — Thousands of San Diegans on Thursday peacefully protested and called on justice for George Floyd across the county.

Late Thursday night, San Diego police in a tweet said the march, in which thousands of San Diegans participated, was issue free with only one arrest made.

The arrest was made after an individual shinned lasers at the police helicopter. The police department said it is illegal and extremely dangerous.

Protesters that marched from San Diego police headquarters to North Park are heading back downtown and were passing an area near City College.

Thousands of protesters have made their way from SDPD headquarters downtown, and are now marching through Hillcrest towards North Park. The made stops at Balboa Park and the intersection of University Avenue and Sixth Avenue.

SDPD estimates the crowd at 2,000 and says it has remained peaceful.

A protest in the mountain community of Julian was underway with people lining Main Street. Police in the area were seen asking protesters to remain on the sidewalk.

Lydia Frausto, a Julian resident, mother, and business owner, told News 8 it was a lovely event, and stayed peaceful with all locals. She said some "outsiders" tried to pick a fight but sheriffs "showed up... and seamlessly diffused the situation."

A protest got underway downtown at 5 p.m. starting at San Diego police headquarters on Broadway with plans to march to North Park and back. Social media posts for the evening event touted it as a black-led march for justice and police reform.

Protesters could be heard chanting the names of black victims of violence including George Floyd and Breonna Taylor. They also chanted "no justice, no peace, no racist police."

Fliers promoting that protest state a list of demands from the group, which include banning the use of "military grade weapons on unarmed protesters," firing the La Mesa police officer who arrested 23-year-old Amaurie Johnson near the Grossmont Trolley station last week, and reforming police practices to prevent the deaths of detainees and other citizens.

The San Diego protest is being led by "a group of black youths in San Diego," according to the flier, which reads, "Please come at your own risk, as demonstrated at previous protests, the police are not afraid to engage in hostile tactics, but please come only if you are planning to participate in peaceful congregation and protests. The organizers do not condone looting, fighting or setting fires. Bring signs, wear a mask and come prepared."

A protest was held in North County San Diego Thursday afternoon. The City of Oceanside also had a protest in the area Wednesday night.

"[Wednesday,] citizens exercised their right to a peaceful protest in the downtown area, and OPD was present to monitor the safety of the crowd and local businesses. Be assured that safety is paramount and the Oceanside Police Department is fully staffed and attentive to the needs of the community during this time of strife," a statement from the city read in part. 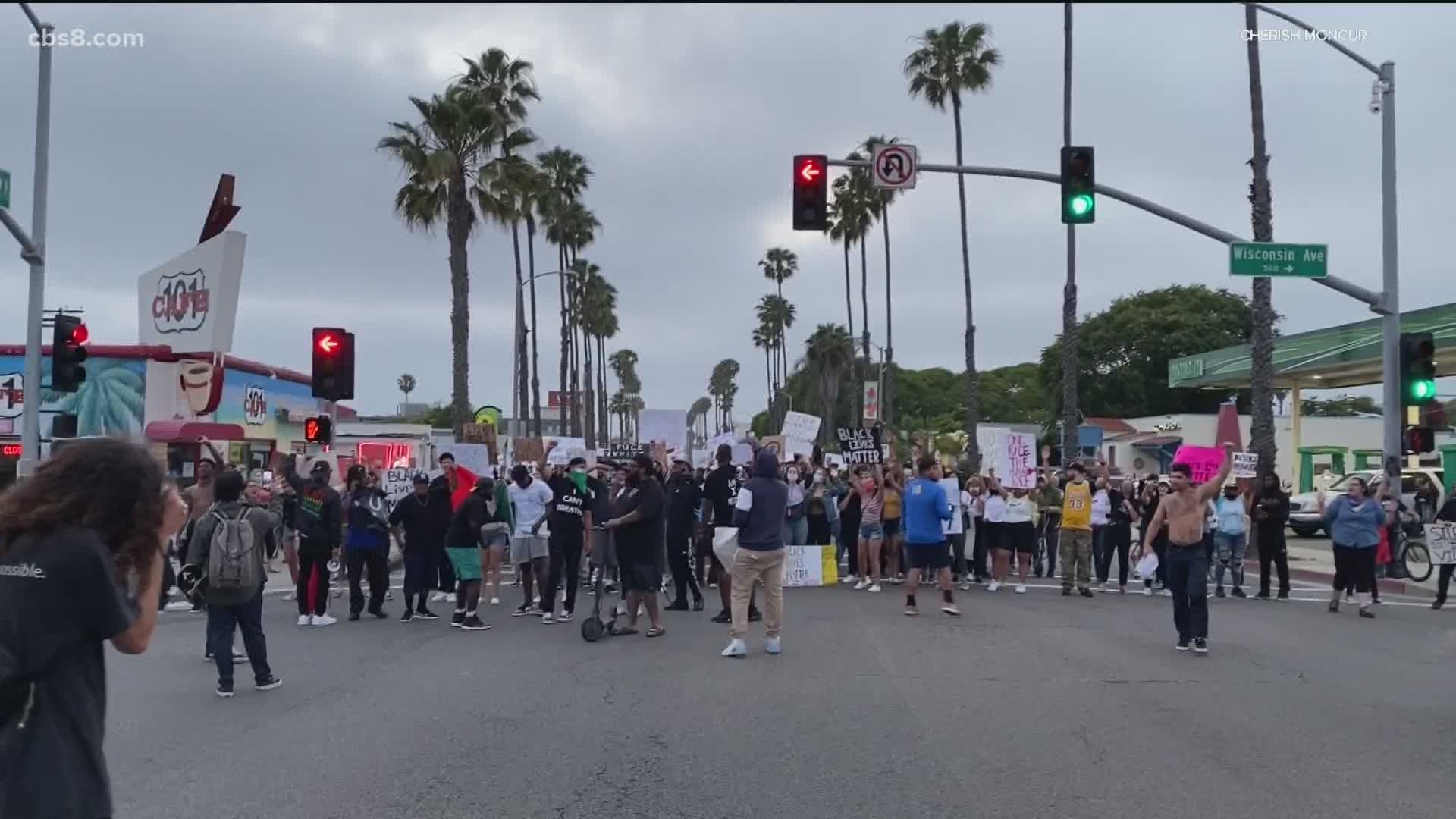 One of several protests planned in San Diego County for Thursday got underway in Chula Vista around 2 p.m. The Black Lives Matter protest gathered at Chula Vista Community Park for several hours.

"This is a peaceful protest," read a flyer on the march. "We don't condone violence. 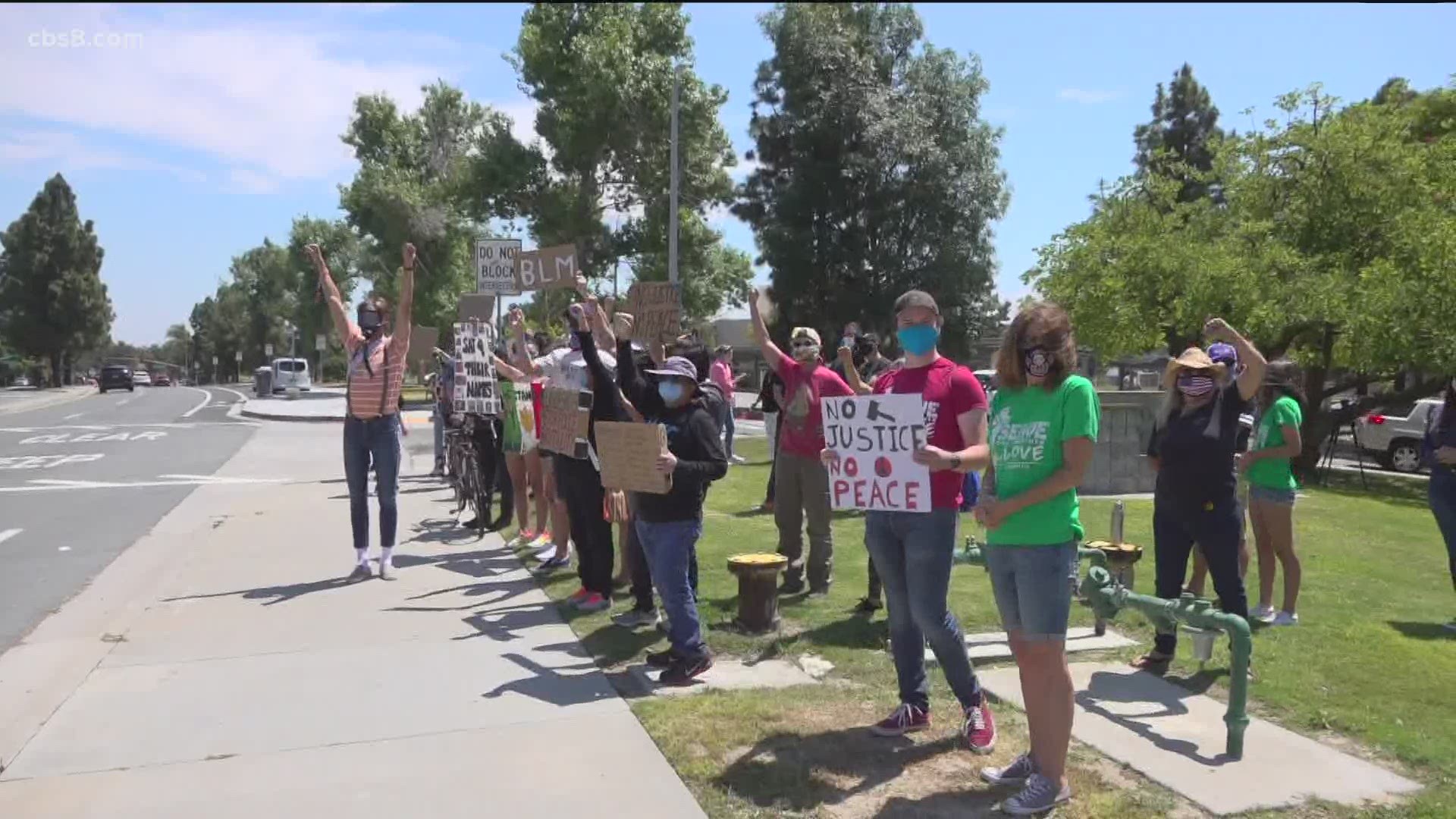 Police cars were seen patrolling in the area of the park located on Eastlake Parkway and some officers were also seen standing with protesters.

At one point the protesters and police were seen taking a knee together. Chula Vista Mayor Mary Casillas Salas also stopped by the protest and participated in a moment of silence for George Floyd.

Wednesday marked the sixth straight day of protests in the San Diego area. San Diego police indicated on Twitter that no arrests were made Wednesday and all protests remained peaceful.

Despite days of peaceful protests, around 200 members of the California National Guard were deployed Wednesday to the San Diego area, with about half of the Guardsmen sent to La Mesa. They were sent to reportedly support police in La Mesa and deputies around the county after a request from Sheriff Bill Gore.