Lennon died when he was 40 years old, after he was shot and killed by Mark David Chapman on the night of Dec. 8, 1980. 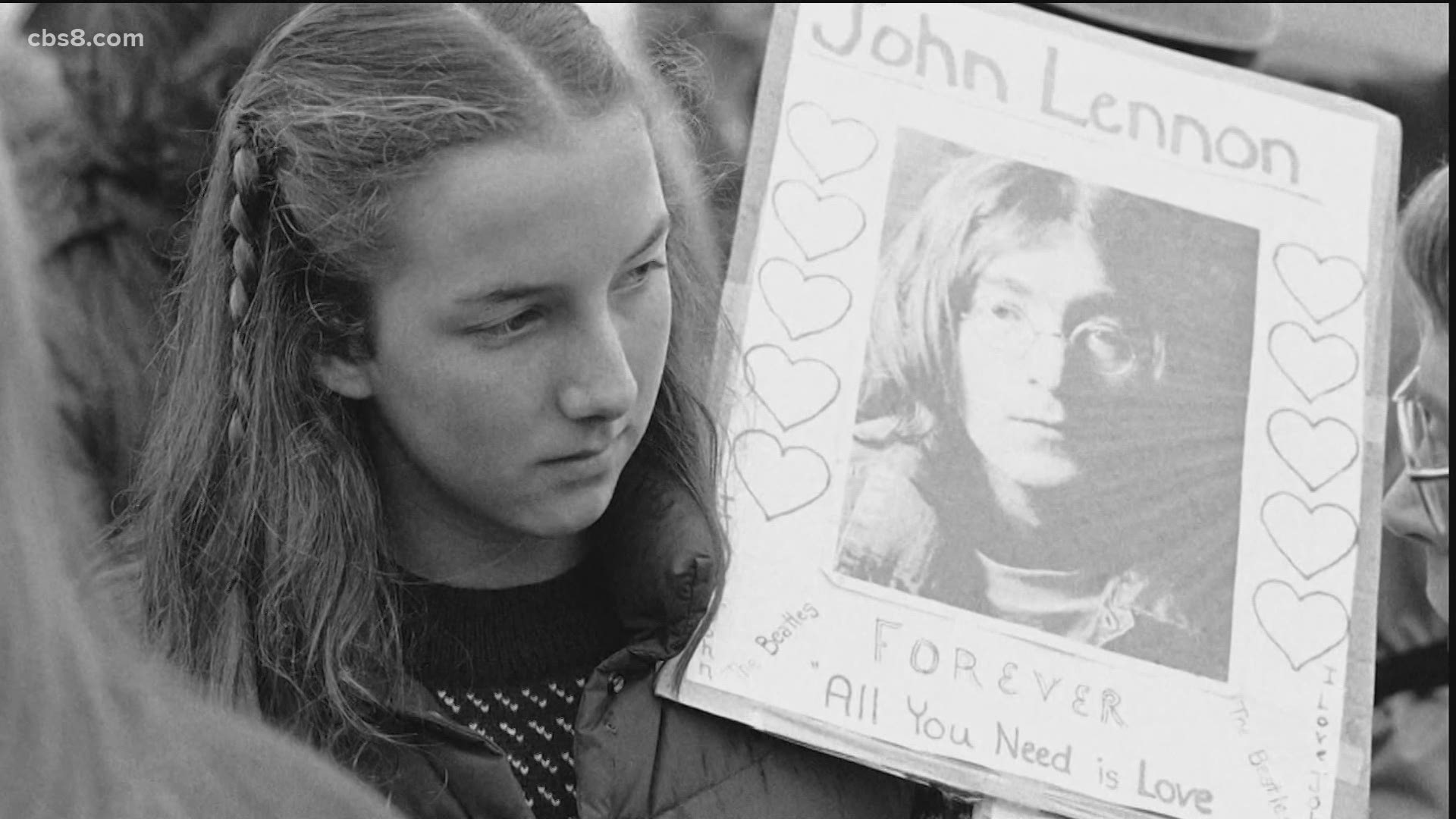 SAN DIEGO COUNTY, Calif — Forty years ago, the world was shocked and saddened by the death of John Lennon. On December 8, 1980 a deranged fan, Mark Chapman, gunned down the music legend in front of his New York City apartment building. Lennon was forty years old. Sad to think he has now been gone as long as he lived. He accomplished so much in his relatively short life and it’s difficult to think about the music the world missed out on with his untimely death.

“The death of John Lennon touched off a wave of shock and mourning around the world,” said Walter Cronkite. Sean Strub heard the shots and described the horrific scene moments after Mark David Chapman gunned down the music legend. He was a Beatles fan and Lennon gave him an autograph earlier that day on December 8, 1980.

The day after Lennon's death, Larry Himmel went to Pacific Beach Junior High School to contemplate what Lennon and the Beatles meant to him in his youth. Larry said there was hope that there would someday be a Beatles reunion but a man who was nine years old when "I Wanna Hold Your Hand" was the number one record, shot that dream down.

“When that guy shot John Lennon in New York he killed a lot more than that human being, he killed a lot of our youth,” Jerry G. Bishop. Sun Up San Diego host Jerry G. Bishop toured with the Beatles as a reporter for Group W and NBC Radio Stations on their 1964, 1965, and 1966 tours. He said there was no doubt that John Lennon was The Beatles. A local woman summed up the feelings of many saying she felt like she lost a close friend but didn’t know him.

On December 14, 1980 vigils were held around the world. The largest one was in Central Park where more than 50,000 people gathered to honor Lennon. San Diegans expressed their grief in Balboa Park. Yoko Ono requested 10 minutes of silence at 2 p.m. ET. The crowd sings the fitting “All We Are Saying Is Give Peace A Chance.”

News 8’s Loren Nancarrow went to Tower Records in the Midway area and was there at 11 a.m. on December 14 when a store employee requested patrons take part in the worldwide moment of silence. Beatles records were suddenly hot and sales were way up. "Double Fantasy" was selling for $5.99 but was going to be raised to $6.99 the following week.

In February 1989 News 8 went to England to explore the Beatle’s roots. Their trip began in their hometown, Liverpool. Mathew Street is where it all began at The Cavern Club. Chris Saunders met the locals, including John Lennon’s uncle Charlie, who had doubts the band would make it. They visited Penny Lane and Strawberry Fields. In London, Chris walked the Abbey Road crosswalk and gazed in wide wonder as he stepped into Abbey Road Studio Two. No doubt a highlight of his life was playing the Steinway piano the Beatles used. Chris passed away in 2017. He was the perfect reporter for this story as he was a huge Beatles fan and an accomplished musician.

John’s first wife Cynthia said the Beatles were worried about going to America in 1964 because they weren’t sure they would be successful in the U.S. All doubts must have been quashed when they arrived to thousands of screaming fans waiting at Kennedy Airport.

Photojournalist Bruce Patch and Producer Dean Elwood went on the trip. Bruce has been with News 8 for 43 years now and this was a highlight of his career. He reminisces about it and gives insight into what made this story so special.

Archives Editor Barbara Nielsen took a trip to Liverpool, England in 2003 with her family. She shared a few pictures with News 8 of her admiring the John Lennon statue in front of The Cavern Pub and standing outside The Beatles Story museum.