News 8 takes a stroll through the charming streets of Mission Hills, exploring its rich history and seeing how much it has changed over the decades. 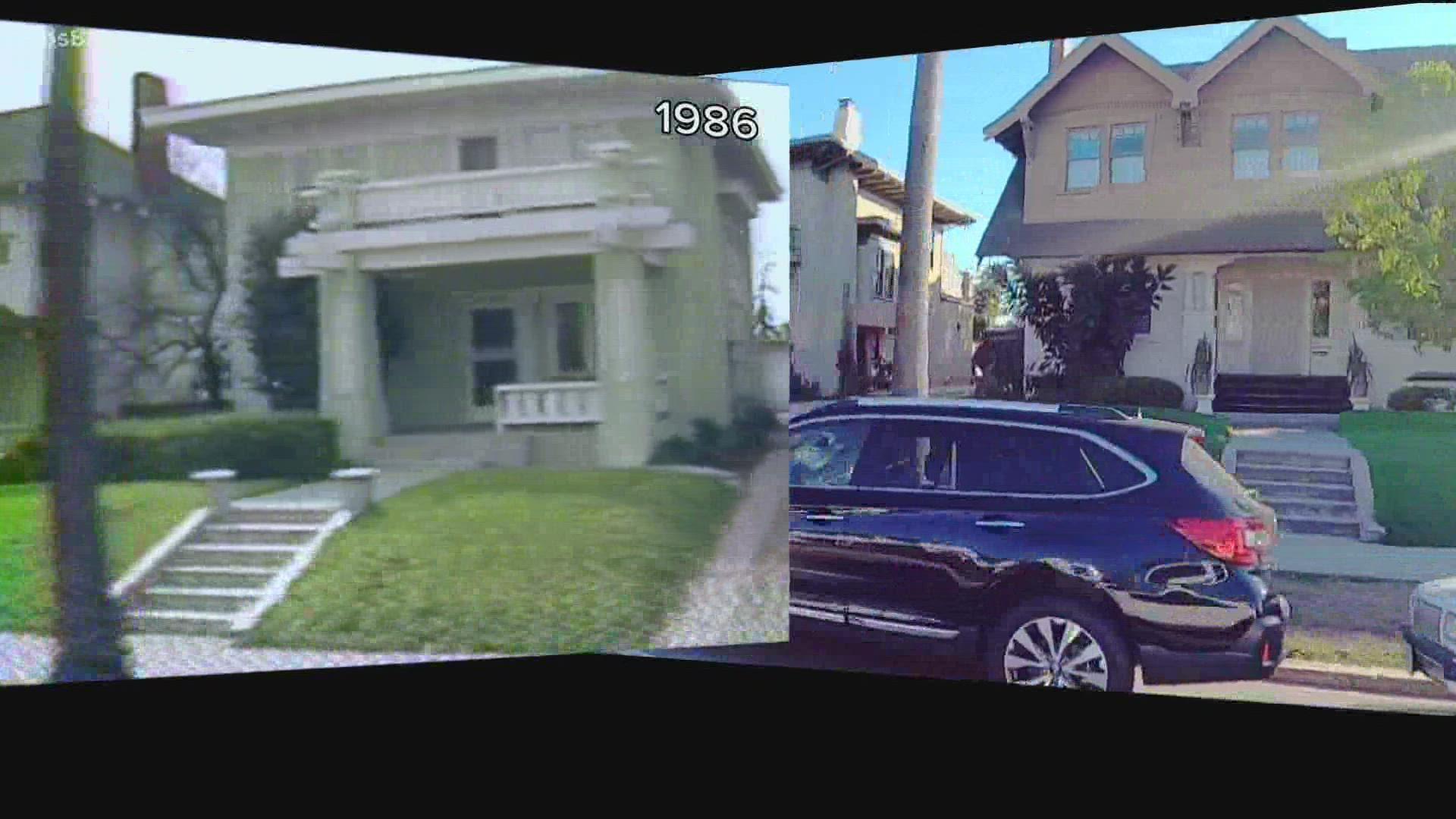 SAN DIEGO COUNTY, Calif. — From the quaint Craftsmans to the beautiful bungalows to the Spanish Revival homes, along with breathtaking views: Mission Hills is one of San Diego's most historic and well-preserved neighborhoods.

It is a community that captures "Old California" charm, which News 8 captured in the 1970s and the 1980s: a small-town feel that persists through today.

Sometimes when strolling through Mission Hills, it's easy to forget you're in the city at all.

Toni Palafox is one of the owners of Mission Hills Nursery, just the third family over more than a century to run the neighborhood's oldest business, which was started in 1910 by renowned botanist Kate Sessions

"It is humbling," Palafox said.

Famous as the "Mother of Balboa Park," Sessions also helped put Mission Hills on the map.

"When you look at the pictures, there was nothing here," Palafox added.

Sessions managed to convince John Spreckels, owner of the San Diego Electric Railway Company, to extend trolley service out to Mission Hills, connecting it to the growing region.

"Definitely she was pioneering," Palafox told New 8. "Not afraid to go out and go after what she wanted."

The history goes back even further. In 1869, steamship captain Henry Johnston purchased 65 acres of land above San Diego Bay, which would eventually become Mission Hills. The purchase price for those 65 acres more than a century and a half ago: just $16.25.

"Instead of calling it 'Marston' he called it 'Mission Hills.' Its proximity to the first mission made it special," said historian and Mission Hills resident Janet O'Dea. who literally "wrote the book" on Mission Hills, along with her husband Allen Hazard.

"It was a matter of timing," she said, pointing out that as these sub-divisions were bring created, San Diego announced it would be hosting the Panama California Exposition, drawing builders and artisans from throughout the country to San Diego, and to Mission Hills' empty parcels of land.

"The fuse was lit, and the building boom started!" O'Dea added.

Part of the community's unique charm is that the development follows the natural landscape.

"So the streets in Mission Hills, you'll notice, are all curvy," O'Dea said.

Among the stand-out homes: Villa Orizaba, the first home built here, and the Guymon House, which served as the Civil Defense Headquarters during World War II, as well the home where Janed Guymon Casady grew up.

Casady, who spoke with News 8 back in 1986 as well as for this profile, noted that over the past 35 years, the advent of social media, from sites like NextDoor to online meet-up groups, has helped bring the community together.

"I think the neighborhood is probably closer today than it used to be," Casady said.

"There isn't much left to build on Mission Hills. It is pretty well built out or I wouldn't be doing this interview," she laughed. "If I thought I was going to bring people in to Mission Hills... It's like, 'no, keep them out!'"

For those who are here, like relative newcomer Nicole Wilson, Mission Hills feels like an idyllic spot.

"You know, it's still an urban area but it has a real neighborhood feel," she said.

This is also one of the reasons that long-time resident Tom McArdle picked Mission Hills to raise his family here more than four decades ago.

While it may appear that much of Mission Hills has remained the same over the years, there has been change, especially when it comes to businesses.

Gone is Ron Kiefer's beloved grocery, spot-lighted back in the 1980s, now replaced in part by a yoga studio, while neighborhood institutions like the Huddle restaurant remain.

New spots are constantly popping up, like Meshuggah Shack, where you can get your espresso with a side of 'opera'.

As Mission Hills heads into the future, the mission to preserve its past is even more pressing.

"Once it's wiped out, it's gone, and in this case, it's literally buried," said historian Janet O'Dea.

That includes the grave markers at Pioneer Park, which is still the resting place for thousands of San Diegans.

"It would be great to have an acknowledgment that this wonderful park also is the burial ground for our city's founders," said O'Dea.

Aside from the spectacular homes here, it is the people that make this community special.

"Probably the best thing is the neighbors," McArdle said. "The neighbors are all terrific people."

"I hope that never changes," O'Dea told News 8. "I think that legacy can be carried on to future generations."