We're presenting two archival reels for a special birthday throwback this week as KFMB-TV celebrates 71 years on May 16. 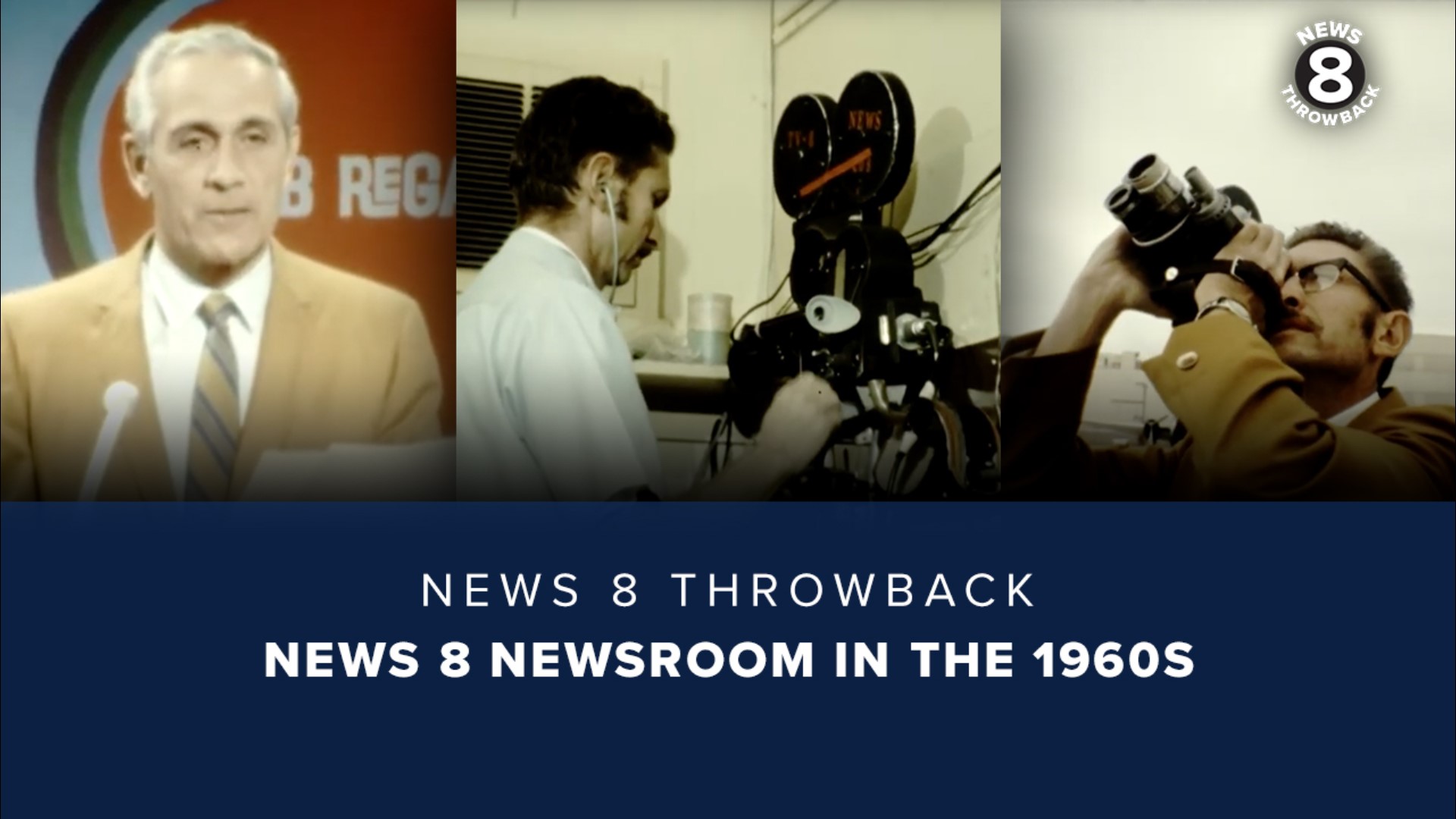 SAN DIEGO — We recently found a treasure trove of amazing old film in News 8 storage. Rolls of film with little or no information were found hiding in dusty boxes, having waited decades to be discovered on the shelves.

We're presenting two of the reels for a special birthday throwback this week. News 8 turns 71 Saturday, May 16, so we thought this would be a perfect week to unveil the lost and found treasures. They were not stored properly in canisters, so what's truly remarkable is how well preserved they are.

Roll one is a mix of behind the scenes from the KFMB building that had stood in downtown San Diego on 5th and Ash. That corner is now a parking lot and the building long-since demolished.

1960-1962 begins with the rotating 8 sign atop the broadcast headquarters on 5th and Ash downtown. Inside the newsroom we see crisp, clear images of a small staff hard at work.

Assignment editor and writer, Stu Batt, appears at 2:05. Behind him is a 16mm editing table. At 3:24, photographer Durian Stewart is testing out an Auricon Cine Voice 16mm sound camera. Other highlights are master control, film editing, and the studio with anchorman Mel Knoepp at the desk.

This is the studio where newscasts, Sun Up San Diego, and Bob Dale's afternoon movie show were shot. Dance Time, Harold Keen's show, commercials, and other audience-involved shows were shot in a different studio.

At 8:45, Harold Keen is in his cubicle on the telephone, along with other staffers hard at work. At 9:34, you'll see UPI machines where national and international news were obtained. At 10:03, a woman is working with a photo of Sophia Loren.

Ray Wilson appears in a stand-up and says "we have one and a half million feet of newsreel film in the TV 8 files and it would take two and a half days of continuous viewing to show just what our photographers took in 1962."

This clip provides an extraordinary window into the past. While everyone appears to be calm, we can appreciate that it was a monumental task to produce newscasts and shows in the early days of broadcasting. Ray once said there was always a last-minute rush and if a story happened an hour or two before the newscast, there was no chance of getting it on the air. There were only two photographers and no reporters at this time.

Longtime photographer, Carl Gilman, recalls this video is an unedited version of a film they put together for presentations at schools to show how the newsroom worked. No doubt it inspired many to pursue a career in broadcasting. Thanks to Carl for his help in identifying many of the people and their tasks. Carl worked for News 8 from 1964 to 1975. He traveled the world as a freelance photographer, working almost exclusively for CBS News.

Here are some more highlights and the times you can find them in the video above:

We owe so much to those who came before us. They were true pioneers, paving the way for modern day journalists. Mixing chemicals and going through the tedious process of film editing, carrying huge, bulky cameras, ripping and reading copy, plugging away on manual typewriters--difficult tasks, indeed. An organized archive system was created in the very beginning. Before computers, the efficient card catalog clearly documented stories. We have scripts in bounded books for every newscast dating back to 1951. Many thanks to them for preserving San Diego history and making News 8 Throwback possible.

As for the other film reels, we will roll them out soon. Ray Wilson at home with his wife and son and a Ted Kennedy-Harold Keen interview are just two of several stories we are excited to share with you.

Special thanks to Pea Hicks for doing a great job digitizing our film.

The photo montage below tells the story of our 71-year history in photos. Edited by News 8's Michael Scalise, it's a trip down memory lane we hope you will enjoy. See the faces you remember from the early days through circa 2000. The Bobs--Dale, Mills, Hower, Regan; Ray Wilson and Harold Keen. Michael Tuck, Allison Ross, Ted Leitner--and many more talented folks who graced our airwaves. And the faces you don't see on TV - behind the scenes people responsible for putting us on the air. Famous faces too like the Reagans, Bob Hope, Woody Allen, Jerry Lewis, and Danny Thomas to name a few. We're thankful that so many photos were taken since many shows were live and not recorded.