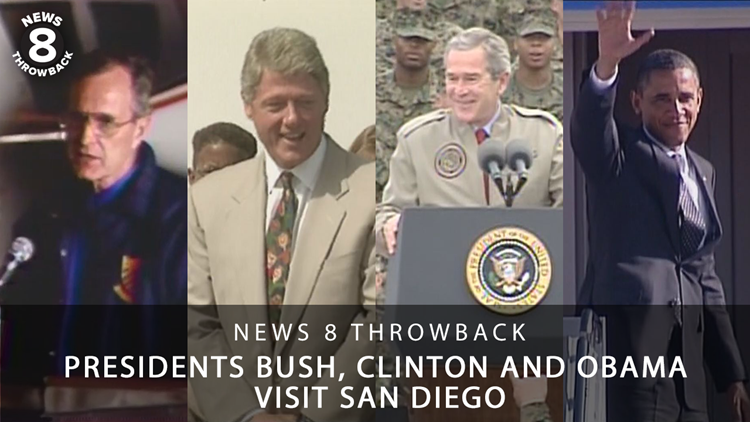 Do you remember when these presidents visited America’s Finest City?

In May 1983, then-Vice President George H.W. Bush and his wife Barbara Bush were given a morning tour of the USS Ranger in San Diego. The two were dropped off on the deck of the aircraft carrier by a Navy helicopter. Bush had specifically asked to visit a carrier while in San Diego. News 8 reporter Lorraine Kimel reported on Bush’s visit, which included a look at capabilities of the six different types of aircraft onboard. The Vice President also received a replica of the ship’s bell from the oldest commissioned officer in the Navy. H.W. Bush served as VP under until 1989 when he was sworn in as the 41st President of the United States.

A little over a year into his first term as President of the United States, Bill Clinton along with wife Hillary and daughter Chelsea visited San Diego in 1994. News 8’s Robin Mangarin reported on the Clintons' activities while in town. In the first clip, the first family visited local tourist spots including the San Diego Wild Animal Park and President Clinton signed into law an education reform measure while visiting local schools. The president and first lady had lunch in Old Town San Diego, then attended a reception with 150 VIPs and dignitaries before heading off to dinner. In the second clip, locals are seen lining the streets of Coronado to try and catch a glimpse of President Clinton and his family. The 42nd POTUS took a run on the beach, played 18 holes of golf and took an hour-long bike ride with his wife while in town.

In December 2004, just a month after being re-elected as President of the United States, George W. Bush visited San Diego. One appearance he made was in front of 7,000 Marines who greeted him enthusiastically. President Bush praised the world of Camp Pendleton Marines in Iraq and offered condolences to families of fallen service members. This clip also includes footage of the 43rd President at MCAS Miramar where he visited before heading to Camp Pendleton aboard Marine One.

In the first clip, then-Senator Barack Obama visited San Diego in July 2008 as a stop on the presidential campaign trail. Obama spoke to a crowd of about 20,000 at the San Diego Convention Center trying to drum up votes in the Hispanic community. The second part of this video shows President Barack Obama on another visit to San Diego in September of 2011. The 44th POTUS was on a fundraising tour but made a quick stop at MCAS Miramar. Then-Mayor Jerry Sanders and then-Congressman Bob Filner spoke to News 8 about their excitement over having Obama land in San Diego. In the final clip, News 8’s Steve Price reported on an Obama fundraiser at a private residence in La Jolla.