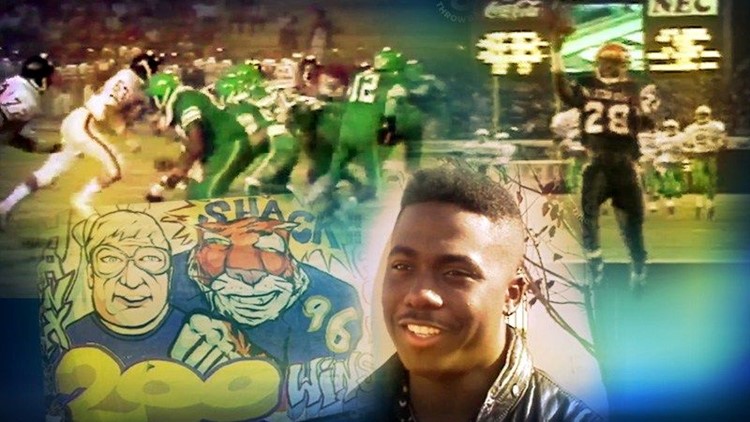 SAN DIEGO (NEWS 8) — As the 2018 football season kicks off at all levels of play, we’re looking back at some of the stars that graced our San Diego fields in decades past. Over the years, News 8 h...
Author: Jennifer Lothspeich (Digital Content Producer), Barbara Nielsen (Archives Editor)
Published: 9:32 AM PDT September 6, 2018
Updated: 10:30 AM PDT September 6, 2018

SAN DIEGO (NEWS 8) — As the 2018 football season kicks off at all levels of play, we’re looking back at some of the stars that graced our San Diego fields in decades past.

Over the years, News 8 has covered everything from college football standouts like Marshall Faulk to legendary local high school coaches.

As 1991 drew to a close, the college sports world was buzzing about San Diego State University Aztec running back Marshall Faulk. The freshman player had a record-setting game in September when he rushed for 386 yards and scored seven touchdowns – and it was only his second collegiate game ever. In December 1991, New 8's Hank Bauer asked Faulk about being a Heisman Trophy contender and if he saw a future for himself in the NFL. Faulk said he did and, as we know over 25 years later, he was right.

In 1993, News 8's Rick Powers caught up with Aztec coach Al Luginbill to talk about the upcoming football season. San Diego State University had suffered a devastating loss in the Holiday Bowl the year before against Fresno State. Luginbill was hopeful that the team could move on especially with help from running back Marshall Faulk - one of the most notable Heisman Trophy runners-up in college football history. As many know, Faulk went on to have a successful career in the NFL playing for the Indianapolis Colts and the St. Louis Rams, and back in his 1993 season with the Aztecs, Faulk caught 47 passes for over 600 yards and 3 touchdowns and ran for over 1,500 yards with 21 touchdowns on the ground.

In the fall of 1978, News 8's Dave Cohen took a look at security and safety at high school football games in San Diego. A few years prior the school officials had limited the number of night games due to fighting, thefts and "rock-throwing incidents." Despite the added security and police presence, football fans can still be seen - and heard – having a blast in this clip.

In 1997 News 8's Ted Leitner did a feature with interviews of three legendary high school football coaches in San Diego; John Shacklett of Morse High School, Herb Meyer of El Camino High School and Bennie Edens of Point Loma Highs School had a combined 112 years of coaching experience at the time. They talked to Ted about some of the highs and lows of their careers. Shacklett had been coaching since 1971, Edens since 1950 and Meyer since 1959. The second part of Leitner's piece featured San Diego high school coaches of other sports including basketball, volleyball, wrestling and baseball.