We hope you enjoy this look back at several different eras of Pride with our vintage videos along with pictures courtesy of San Diego Pride. 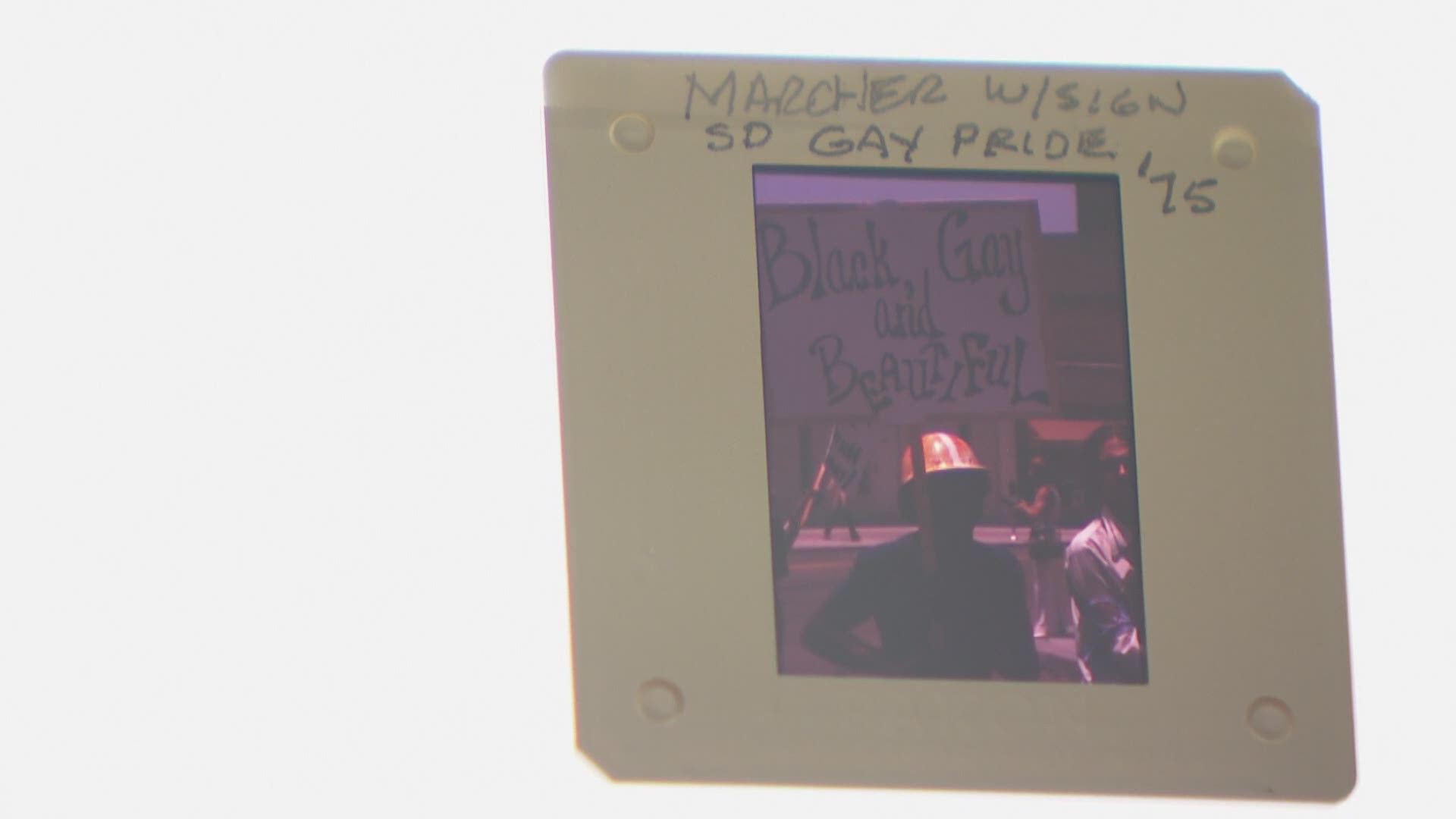 Though it has gone by different names over the years, the San Diego Pride Parade has long history. In 1974, The Center for Social Services put on what many consider the first Lesbian and Gay Parade in San Diego and celebrated the 1969 Stonewall Rebellion.

45+ years after that first parade, San Diego Pride is once again honoring Stonewall this year with its parade and festival July 12 – 14 and the theme: "Stonewall 50: A Legacy of Liberation."

Footage from our News 8 archives captures the changes the San Diego Pride Parade has gone through over the years, the challenges the LGBTQ community faced along the way, and the ways its message of unity and equality has remained steadfast for over four decades.

We hope you enjoy this look back at several different eras of Pride with our vintage videos along with pictures courtesy of San Diego Pride - including the one below from a 1971 Gay Liberation Front meet-up where News 8 reporter Harold Keen and photographer Ben Cutshall can be seen.

We wish everyone a happy and safe San Diego Pride in 2019! News 8's Carlo Cecchetto and Barbara-Lee Edwards, and 100.7 San Diego's Robin Roth, Meryl Klemow and Ted Woods will be participants in the Pride parade so keep an eye out for us!

In the summer of 1978, members of the San Diego LGBT community gathered for a picnic a day before marching in what was then called the San Diego Lesbian/Gay Pride parade. News 8's Doug McAllister spoke with people at the picnic about controversy surrounding participants who some worried would use the parade for means besides "promoting gay pride, gay unity and human rights for gay people." On parade day, hundreds showed up marching to show pride and "to protest the oppression of gay people all over America."

1 / 10
San Diego Pride
Hundreds march in San Diego for what was then called the San Diego Lesbian/Gay Pride parade on June 25, 1978.

In 1990, the San Diego Pride Parade was held with the theme “Look to the Future: A New Decade of Pride.” News 8 was at the annual parade on June 9 where reporter Gina Lew spoke to members of the LGBT community, parents showing support for their children and former military members speaking out about equal rights and protections. "You see students out here, you see veterans from the war, you see political activists, you see people who are just artists - and we're all people," said one parade attendee.

The mid-1990s brought several changes to San Diego Pride, including its move to the month of July. The following clip shows a much larger Pride parade complete with contingents featuring San Diego police, firefighters and lifeguards.

The 2001 San Diego Pride parade celebrated diversity in the LGBTQ community as organizers wanted to "reach out to participants of all ethnicities and backgrounds."  While the celebration was as vibrant and fun-filled as ever, attendees also spoke to News 8 about the struggles the community still faced. That year's theme "Diversity Creates Community" was reflected in a number of ways including in the official Pride program which was a bilingual publication for the first time.

1 / 9
San Diego Pride
San Diego Pride's theme in 2001 was "Diversity Creates Community." It was the first year the official Pride Guide was printed in Spanish.