These News 8 Throwback memories of SDSU span decades but we begin with something truly special - a look at newly digitized film of the campus in 1958. 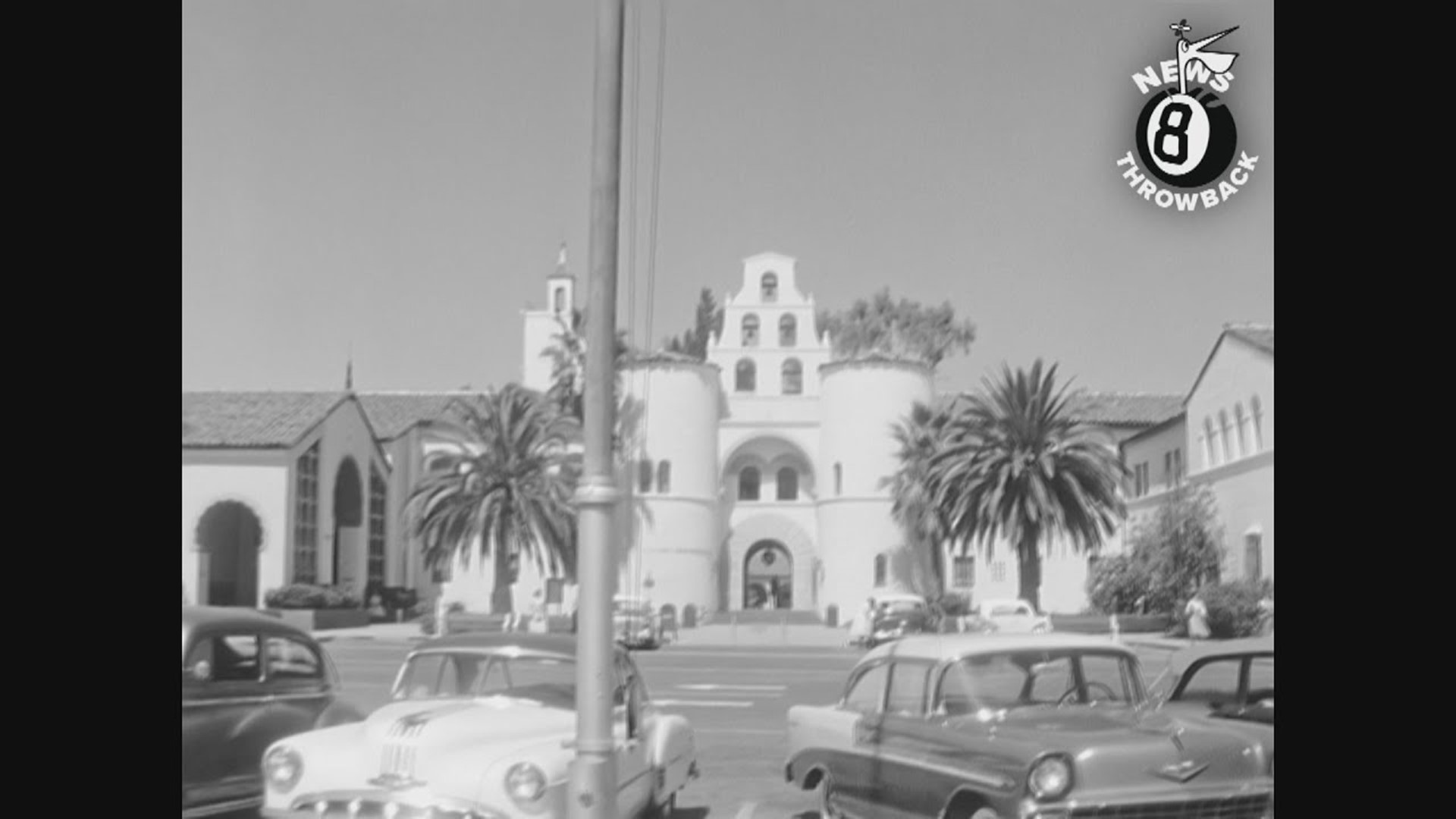 SAN DIEGO — Generations of San Diegans - and students from around the world - have received their education at San Diego State University. From its humble beginnings as a teaching college for women - known then as San Diego State College - to the world-class institution it is today, it is a treasured part of our community.

News 8's archives are loaded with stories about "Montezuma Mesa." We were at the annual Spring Sing in 1967. News 8 joins the masses every year for the first day of the fall semester. We're sharing 1980s coverage of that and fraternity parties in 1982. In 1996, the Love Library expanded to include the Info Dome. But we begin with something truly special - a look at newly digitized film of the campus in 1958.

In August of 1958, San Diego State College was rapidly growing as major construction projects were underway. Several hundred construction workers were hired to work on five new buildings. All were scheduled for completion in the fall of 1959.

Five dormitories and the geology chemistry structure cost $3.5 million each. A physics addition cost over a million and a half dollars. A four-story library annex was expected to be ready in December 1958. That cost $1.5 million dollars. The cafeteria and bookstore were finished and looking beautiful.

The fall semester began in September. New female students were welcomed at a Coca-Cola party. The original script from the News 8 archives called it informal but not by today's standards--they're beautifully dressed.

It was a record high enrollment that year with over 10,000 students registered. State College claimed to be among the top 5% of the colleges across the nation.

This was the first of four days for registration. The growing college added 65 new full and part-time faculty members to its staff of 507. And that's the way it was 63 years ago at San Diego State College.

The video below was tracked by News 8 Anchor Marcella Lee in 2021; the unedited footage appears in the video player above set to music.

The Spring Sing was the first event in the week-long annual salute to the season. Dormitory, fraternity and sorority groups competed in this contest and received trophies. Other events were a carnival, sports night, and a college bowl quiz. This silent footage captures some of the styles of the time but sadly, not the songs.

"Oh, the humanity. If you don't like crowds, this is not the place for you."

Getting a higher education at SDSU was in high demand in 1987. The first day of classes saw students in search of spots to park and classes to crash.

Fraternities at SDSU were very popular in 1982. Pledges had doubled in size in the previous four years. Reporter I.J. Hudson said anyone expecting "Animal House" that night would have been disappointed. Decibel levels were being monitored so as not to disturb neighbors and IDs were being checked.

One young man told News 8 that it was a lot more respectable to be in a fraternity then and that a lot of businessmen had been in fraternities. Weekends were a time to take a break from studying, get out and socialize, and have a great time! The party started about 4 o'clock Friday afternoon at the DU house-known as the DU TG, a rite of passage for SDSU students.

The Info Dome was a welcome addition to the Malcolm A. Love Library at SDSU in 1996. The $22-million facility offered additional study space for students and a media center. The Info Dome gave students access to computers and even the internet - big-time stuff in '96.

News 8 reporter Evette Dabney spoke to students about their reaction to the new facility.

Credit: KFMB
KFMB Stations General Manager Howard Chernoff with SDSU President Malcolm A. Love when the station donated a transmitter to the university in October 1953. The school's library is named for Love.