News 8 Throwback: San Diego students heading back to school over the years

These gems from the News 8 archives include black-and-white film from San Diego schools in the 1960s and stories on modern schools of the 1980s. 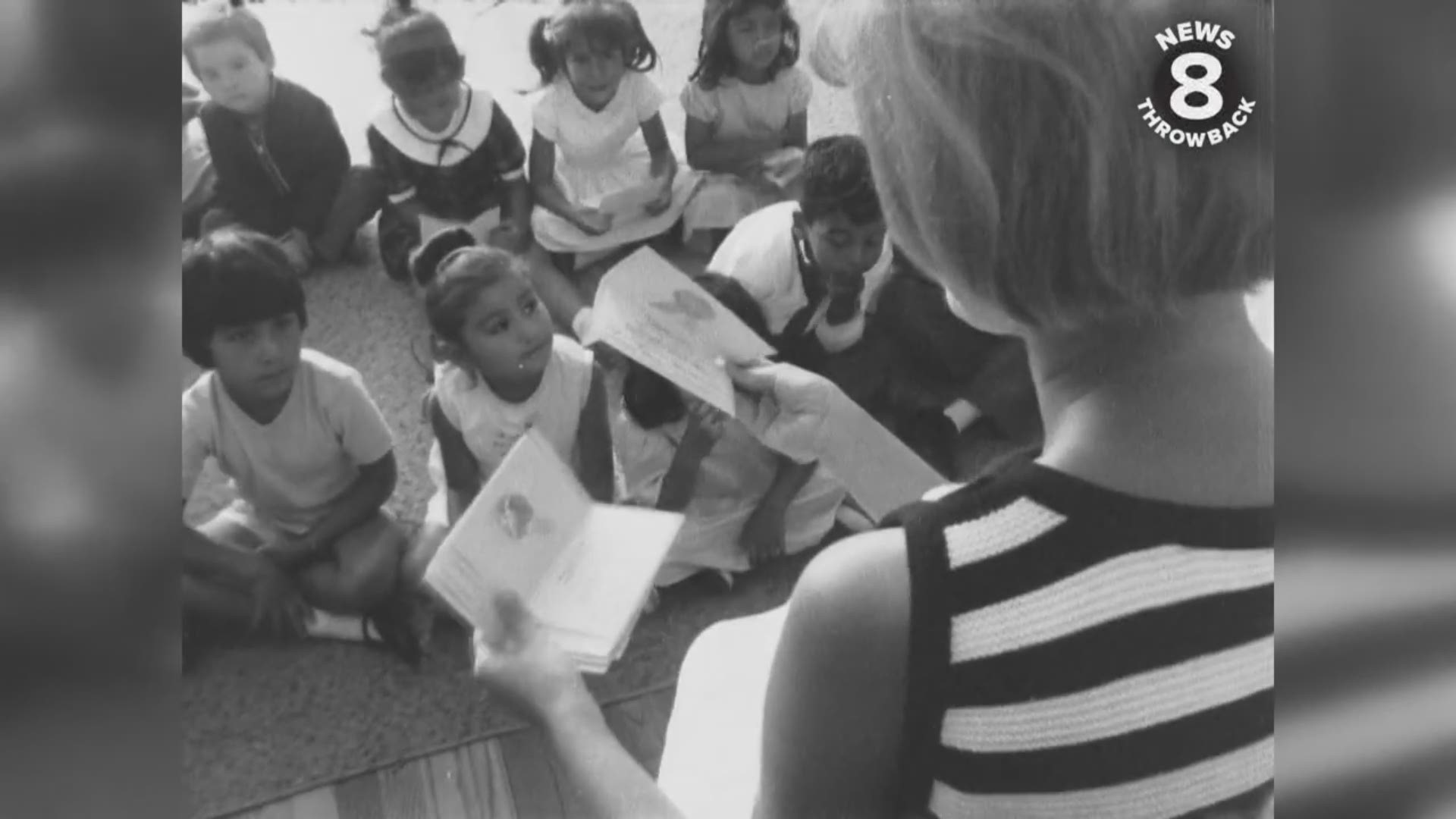 SAN DIEGO — As students in San Diego get ready to go back to their classrooms – though in different ways than in the past – we're taking a look back at back-to-school time in years gone by.

These gems from the News 8 archives include black-and-white film from San Diego schools in the 1960s and stories on modern schools of the 1980s going through various growing pains.

New teachers in the Sweetwater District meet in 1965

This film from September 3, 1965, shows a group of new teachers from the Sweetwater District in South County San Diego being welcomed ahead of the new school year.

The original script from the story reads:

"The sound of school bells was a sure sign of early September in Sweetwater today. The school bells were ringing for 79 new secondary teachers and college instructors. Joseph Rindone, Sweetwater District Superintendent, welcomed the new educators and outlined services available to them in the district. In this kind of project head start for all new teachers, general orientation was offered in the Hilltop Junior High School cafeteria. With the official start of school just around the corner, Monday September 13th, special pre-school workshops for teachers were outlined for next week to advise all teachers of new curriculum programs and recent changes. The Sweetwater District now has 724 secondary and college instructors."

The children seen in this footage are now in their late 50s or 60 years old. We sure hope you see yourself or someone you know in these precious film clips from 1965. The styles have changed but the activities look very familiar from sitting cross-legged in front of the teacher to wearing construction paper hats to leafing through picture books.

Original scripts from these stories appear below:

"19 pre-school age children in National City have a 'head start' in their future academic careers, the result of a summer program concluded today by Mrs. Carol Sabin, teacher at Kimball Elementary School. Operation Head Start at Kimball was partnered after the Federal Government project designed to give children advance help before the competition of regular school. The difference here was that funds for the program came entirely from the National City School district."

"It was almost like the beginning of a new life for about 10,000 San Diego youngsters. Yesterday, it was the day kindergartners registered at school. Here at Oak Park, Mr. Helen Conkey greeted the children, and after they explored their new surroundings, they were treated to a story session. Classes won't begin until next Monday. This year officials expect about 70, 900 children in the city's elementary grades. Today is Admission Day, so there won't be any school activity, but tomorrow all 7th graders are requested to report to their respective junior high schools at one o'clock in the afternoon for orientation--but ONLY 7th graders."

Some of the kids attending Montgomery that year were from Taft Junior High and were waiting for their school to be completed.

Original scripts for these clips appear below:

"Probably one of the first signs of fall--the end of summer vacation--is the sight of students reluctantly trudging back to school and today the end seemed in sight. The registration of junior and senior high school students, new to the city schools, got underway today, and these scenes at Montgomery Junior High were typical--mothers with their sons and daughters registering the children for classes which begin Monday, September 13th. Registration of kindergartners and other new elementary school children is set for next Wednesday. Principal William Bailey was busy briefing teachers in preparation for the big days ahead."

"Some 8,500 seventh graders who will be attending San Diego city schools reported to their schools for orientation sessions today. The youngsters reported a little early so they could be filled in on the way things are done in junior high. This was the scene at Roosevelt Junior High School near Balboa Park. Other junior and senior high school students need not report until Monday. A new programming procedure initiated by the school district this year will enable the older students to report then. Under this program, they will be able to get the preliminaries out of the way and still get in a full day of school work."

This story from back to school time in 1981 features Valhalla High School in Rancho San Diego. The clip showcases some history of the school and its design. News 8 reporter John Culea also spoke with students about the open layout. "A circle of optimism, a school in the round with administrators, teachers and students, not only surviving but thriving." John surmised.

As Lincoln High School in San Diego prepared to welcome back students in 1986, there had been some changes for the school. It had become a prep school since the previous year with a magnet program focused on healthcare professions with an emphasis on humanities. News 8 spoke to teachers, administrators, and students about their excitement for the new program and school year.