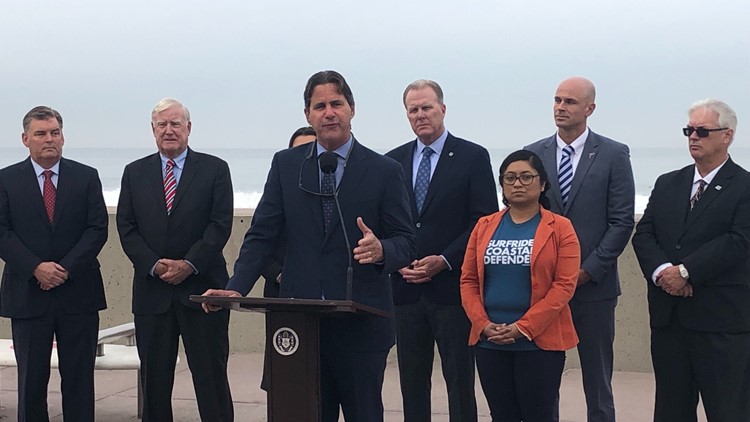 IMPERIAL BEACH, Calif. — A group of local officials from around the county introduced a resolution on Tuesday calling on the federal government to take action to stop cross-border sewage flows in the Tijuana River Valley.

The group of officials -- including San Diego Mayor Kevin Faulconer, Imperial Beach Mayor Serge Dedina, Port of San Diego Commissioner Dan Malcolm and county Supervisor Greg Cox -- held a news conference in Imperial Beach to introduce a list of recommended actions, which will be voted on by multiple city councils and boards in the coming weeks.

The resolution calls for the government to allocate funding to the Environmental Protection Agency to complete restoration projects in the valley that are outlined in the agency's Tijuana River Valley Project Goals report, released in June.

The resolution also calls for the maintenance of the chemical and biological integrity of the valley and the authorization of the EPA to work with the U.S. section of the International Boundary and Water Commission, which oversees waterways that traverse the border, to complete projects required to cleanse the valley's water.

"The federal government is going to see vote after vote come out of the San Diego region in December with one clear message: it's time for action," Faulconer said. "Our unified voice calling on Washington and Mexico City is gaining traction."

The Imperial Beach City Council will be the first body to consider the resolution at its meeting Wednesday night, which is scheduled for 6 p.m.

Throughout the month, the California State Lands Commission, San Diego County Board of Supervisors, Port of San Diego Board of Port Commissioners, San Diego Regional Water Quality Control Board and the Chula Vista, San Diego and Coronado city councils will also consider the proposal.

"This resolution represents a united voice with all of our partners in the region," San Diego City Councilwoman Vivian Moreno said. "The agreed- upon list of projects will begin to address an environmental disaster that has impacted South Bay residents for far too long."

Transborder pollution from the Tijuana River has contaminated U.S. waters and coastlines for decades, forcing the county to regularly close beach access near the border. During that time, local and state officials and environmental activists have called for federal assistance to protect the health of the environment and residents near the border.

The San Diego chapter of the Surfrider Foundation and the city of San Diego have also filed lawsuits against the IBWC, arguing that it has neglected pollution in the river and its effect on the environment. The city jointly filed its lawsuit with California Attorney General Xavier Becerra.

"One of the Surfrider San Diego Chapter's primary goals during the last 18 months has been to work with agencies and the community to reach consensus on a Tijuana River Valley solution," Surfrider policy coordinator Gabriela Torres said. "We believe that the only missing piece towards progress is the support of the federal government."