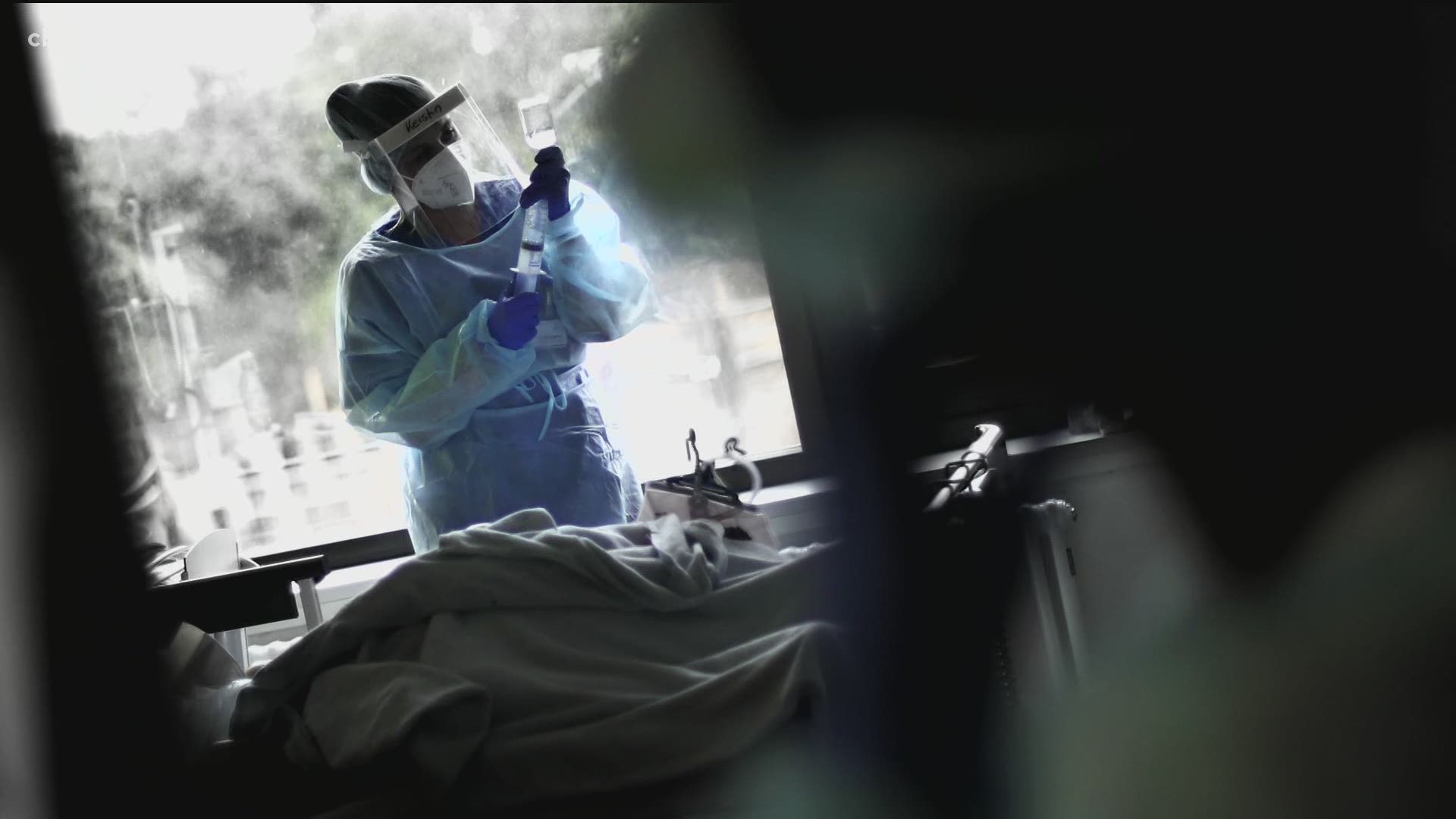 SAN DIEGO — As we continue our series of stories in honor of National Nurses Week, News 8 is profiling a San Diego nurse who worked in a hot zone in New York.

Tracy Contizano, a nurse at UC San Diego Medical Center, is back home after four weeks at Bellevue Hospital in New York City.

The experience took an emotional toll.

After 23 years in nursing, Tracy thought she'd seen it all, but her time on the front lines proved her wrong.

"I cry at the drop of a hat. I feel that I'm going to need counseling. I have never seen so much death in all my career," she said.

Tracy worked 25 night shifts in a row in the critical care unit dedicated solely to COVID-19 patients. She said of the many patients she treated, only one survived.

"We get so hopeful," Tracy said. "But right when you think that they're going to get better, then they deteriorate again and then eventually they do pass away."

As a nurse, she said, your job is to help people recover and heal, and there was very little of that in New York.

"I've never seen sicker people. I've never felt like so much is a failure. I think the whole experience was rewarding, but yet so demanding," Tracy reflected.

The most devastating part, she said, was losing so many patients after caring for some of them for days and sometimes weeks.

"The sad part is, is that the nurses have to place the people in the body bags," Tracy said.

The death of one patient in particular really affected her. A man who had been her patient from her first shift at Bellevue Hospital died after she'd cared for him for three weeks.

As she placed his body in the bag, she said her heart was so heavy.

"Our whole existence, everything that we've worked so hard for, our future plans, our lives, our families, everything is just wrapped up in one bag. It's really sad, but that's what we amount to," she said. "It's like you feel defeated. It feels like, 'why my here?', because I'm not helping anybody."

She said it's very sad for the nurses, who internalize their feeling on the job because they have to focus on the tasks at hand.

"But when you get home, all you can do is cry," she said.

Tracy was sad to leave her new circle of health heroes behind in New York, but is relieved to be back home in San Diego.

"I wish I had more of an upbeat story, but this is reality," she said.

As she returns to life and some normalcy in San Diego, she cautions San Diegans to continue to be vigilant in taking steps to protect themselves from the coronavirus.

She said it's important to continue washing your hands, wear a mask and keep social-distancing.

"Everybody thinks that because this ban has been lifted, it's over. It is absolutely not over. It's just begun," she said.