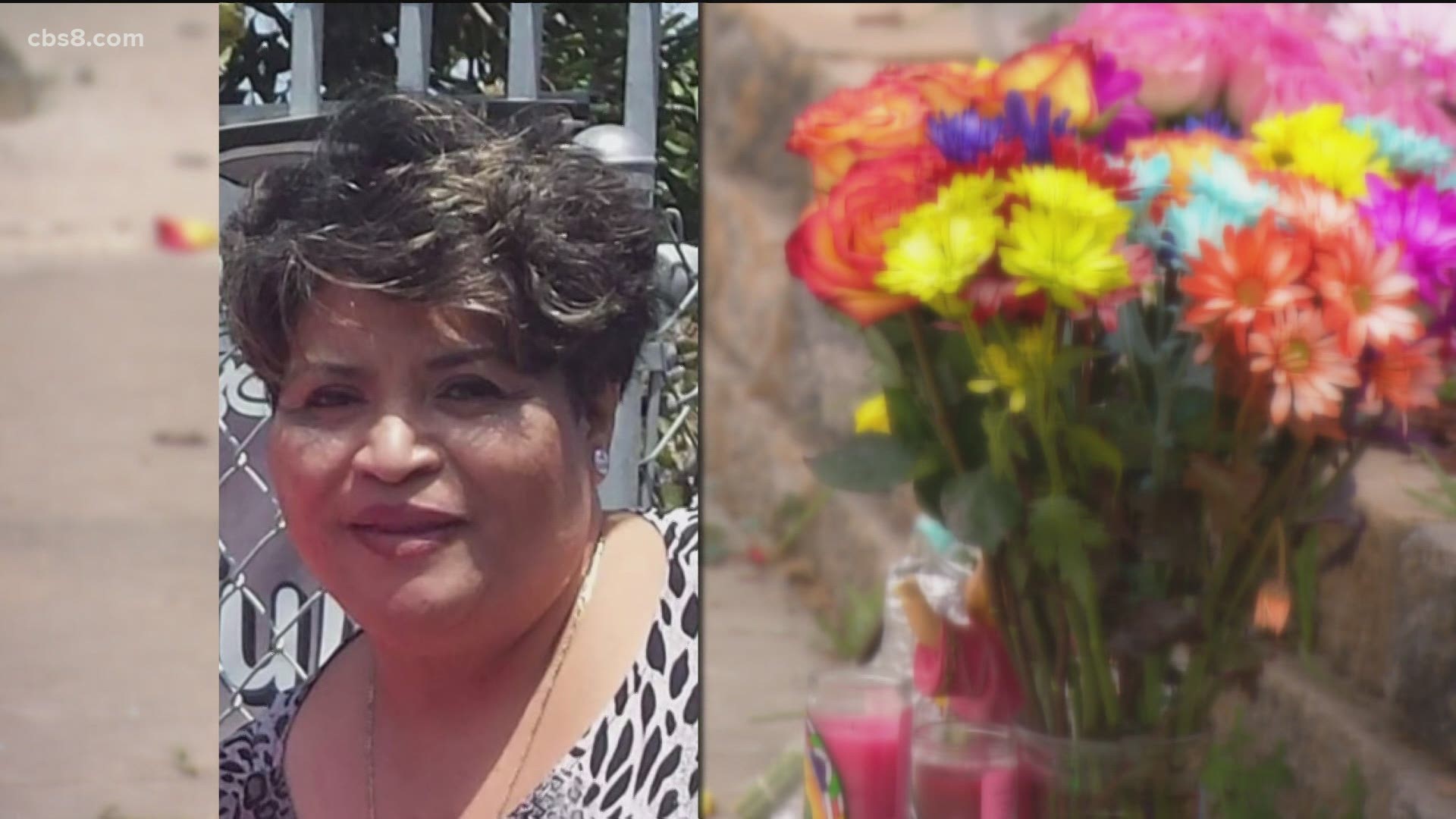 CHULA VISTA, Calif — The San Diego County Medical Examiner released the name Monday of the victim killed by a street racer in Chula Vista on Saturday night. Fifty-seven-year-old Martha Bertha Villalobos Romo was driving on 3rd Avenue in the city of Chula Vista with her grandchildren, who were 10 and 7 years old, in the back seat when a vehicle that was racing ran through a red light and struck her vehicle.

The medical examiner confirmed Villalobos Romo died due to traumatic injuries. Her grandchildren were transported to an area hospital with minor injuries.

The driver of the racing car was arrested and police said the second racing vehicle fled the scene.

A memorial at the crash site was decorated with flowers and candles Monday. The victim's daughters were seen hugging and consoling each other there.

"My mom was always very selfless; she always took care of her grandkids," said her daughter Stephanie Villalobos.

Her daughter noted how much her mother had survived in her life:

"We had a lot of messages and condolences and it's overwhelming because each time I read it, it makes it more real," Stephanie said.

Martha Villalobos Romo was driving her two grandsons to get something to eat late Saturday afternoon when a street racing Mustang ran a red light and slammed into her Nissan, killing her and injuring the boys.

CHP identified the wrong-way driver of the Ford Mustang as Alonso Pina, 22, who is being treated in the hospital for a back injury from the crash. After Pina is released, officers said he will be booked into county jail for vehicular manslaughter.

"We just found out the person driving the car -  he's 22, he's young," said Martha's daughter Lucy Villalobos. "To do something like this for fun and games and take a life away - it's just hard."

A GoFundMe page has been established to help Villalobos Romo's daughter with funeral costs. The family said they would like to thank everyone who has reached out and offered to help.

A vigil for Villalobos Romo was held Monday night.

The other racing vehicle was described as a 2014 or newer white Subaru WRX, authorities said.

Anyone with information about the vehicle was asked to contact the CVPD at 619-409-3817.

The crash was one of several in San Diego County the past week involving wrong-way drivers. On Friday, Ryan Park and his wife Jamie Huntley-Park, two off-duty, detectives with the San Diego Police Department, were killed when a Honda Civic collided head-on with their car. CHP said the wrong-way driver was going as fast as 90 mph. All three died at the scene.

On Tuesday, a 52-year-old woman was killed and four people suffered serious injuries in a wrong-way crash on Interstate 5 in the Carmel Valley area.