Now on the state's monitoring list, several businesses could be forced to change the way they operate indoors by as early as Tuesday - including restaurants. 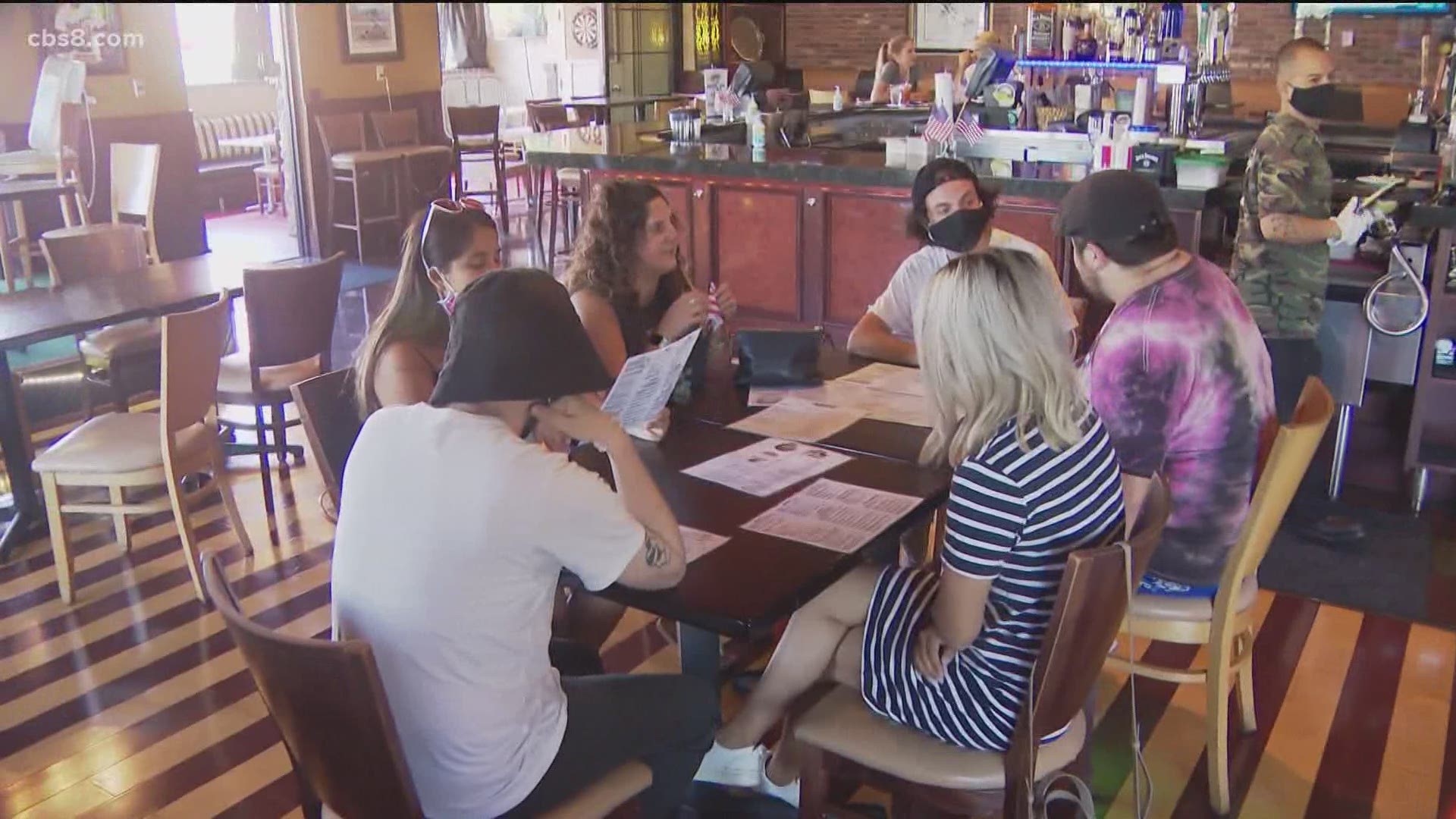 SAN DIEGO COUNTY, Calif. — San Diego County has become the final county in Southern California to be placed on the state's monitoring list after it saw a steady rise in daily coronavirus cases, which could lead to closures or new business restrictions.

With San Diego County on the state's monitoring list, several businesses could be forced to change the way they operate indoors by as early as Tuesday, and restrictions would remain in place for a minimum of three weeks. Businesses affected include restaurants, wineries and tasting rooms, movie theaters, cardrooms, family entertainment centers, museums and zoos.

Many restaurants have reported struggles through the spring and into the summer, including Kaminski's BBQ in Poway.

"You know, it's a roller coaster ride," said the restaurant's co-owner Marsha Kaminski.

Traffic through Kaminski's door has been down so the restaurant has made adjustments.

"You have to be available," said server Kevin Cech. "Willing to pick up shifts. [You] don't know what the schedule will be like. [You have to] be available to work any job at any time."

The location has also limited seating and employees are constantly cleaning.

Wait staff said they have been appreciative of generous tips they have seen during the pandemic, but it can still be hard to make ends meet.

"It's so much less than we were doing when we were open more," said Cech. "A lot of staff [is] really feeling that."

Kaminski knows more ups and downs may be coming as the county went on the state's monitoring list as of Friday.

"Failure's not an option," she said. "Our family's been here since 1965. I'm the third generation and it's not gonna end on my watch no matter what." 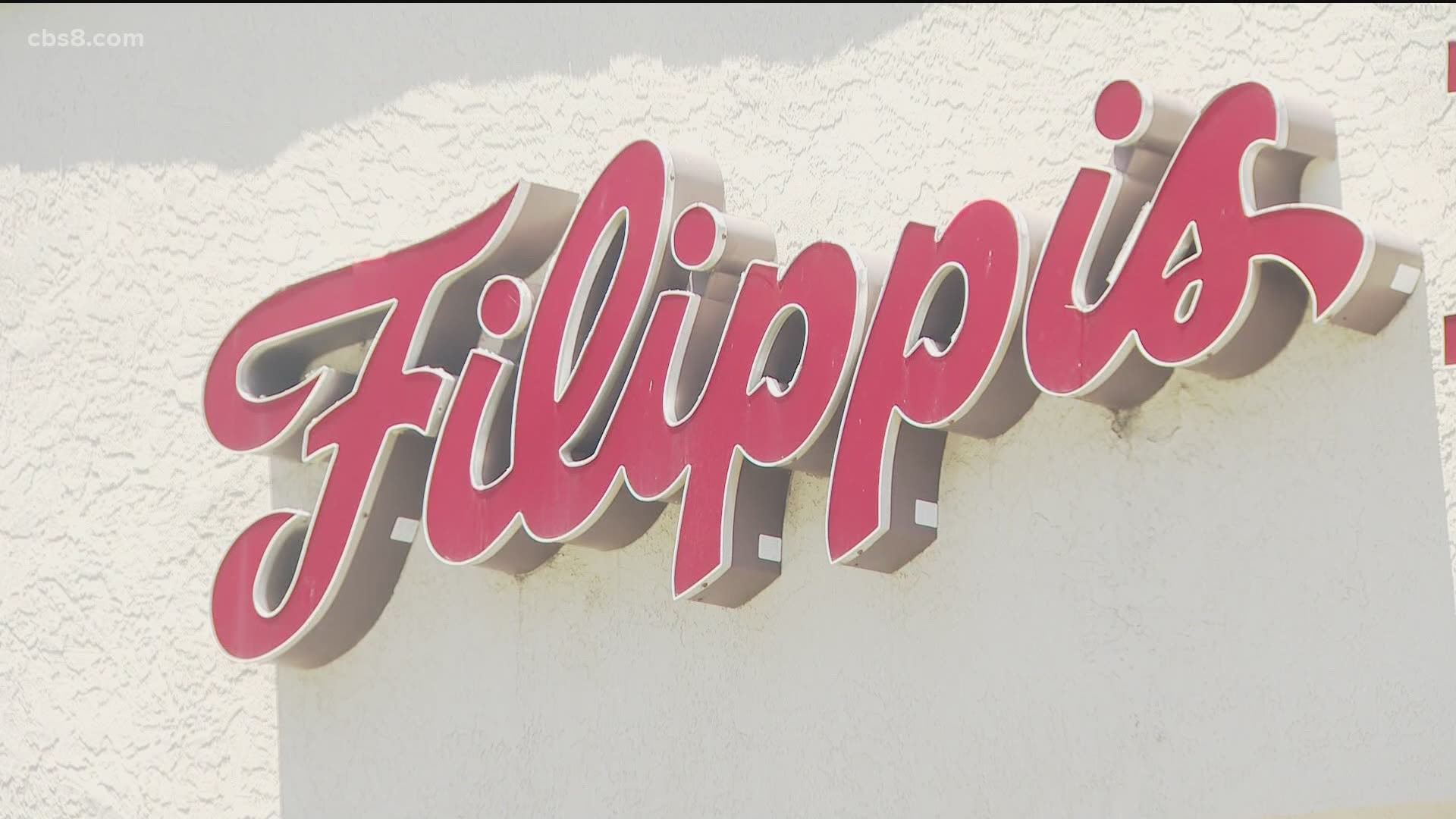 Another restaurant in the area, Filippi's Pizza Grotto went from full service to carry-out only, back to dine-in and now could be facing another closure of the dining area. The owners said it's financially devastating.

Karen DePhilippis called the past few months "a whirlwind."

One of the landmark restaurants in Scripps Ranch, she said Filippi's has lost a ton of money since COVID-19 struck.

DePhilippis said it's been an emotional time filled with frustration and extreme anxiety.

Customers have been back but if the county imposes restrictions soon the restaurant will revert back to take-out with fewer tips.

"Thankfully we do have that but our families have mortgages, car payments," said bar manager Ann Dalo. "We need to keep everybody employed."

San Diego County updated its COVID-19 totals Sunday, adding 1,030 positive cases over the weekend for a total of 16,726.

There were no deaths reported Saturday or Sunday and the region's total remains at 387, health officials said.

On Friday, 7,321 tests were reported to the county and 6% were positive new cases.

On Saturday, 8,095 tests were reported and 7% were positive new cases.

Two new community outbreaks were reported Friday and one on Saturday. All three were restaurants.

Meanwhile, county beaches remained open this weekend amid beach closures in other parts of Southern California. Parking lots at state beaches will be closed through today, however, as part of an order from Gov. Gavin Newsom's on Wednesday.

"At the time of writing, beaches under the jurisdiction of local governments within San Diego County are the only beaches without visitation restrictions throughout all of Southern California, and therefore are attracting thousands of residents from outside your coastal communities and creating significant potential for disease transmission, particularly in crowded restaurants, bars, retail, and hotels," the letter stated. "... To protect the public health of San Diegans and reduce the high potential transmission of this deadly disease in San Diego coastal businesses, we write to request that municipal governments do not open beach parking lots for the July 4th holiday weekend.

"By keeping parking lots closed, we can help limit beach access in San Diego to San Diegans only, to protect the health of residents and reduce the high likelihood of disease transmission in surrounding San Diego restaurants, bars, and businesses. Closure of beach parking lots could discourage day-trips from other communities."

San Diego's Chief Operating Officer Kris Michell said in a statement Saturday that California officials didn't give the city enough time to put in place a beach parking lot shutdown for the Fourth.

"The city of San Diego is closely following county guidance and working with health officials to encourage adherence to public health regulations," Michell said. "The request to regional coastal cities to close beach parking lots on the Fourth of July came last night just a few hours before the start of the holiday, leaving little time to enact, enforce or notify the public."

The cities of Carlsbad and Oceanside said Saturday they are complying with the emergency services request. In addition to closing its beach parking lots, Carlsbad lifeguards and police officers will be providing masks to help reduce spread of COVID-19 on the city-owned beach, north of Oak Avenue to the Oceanside border.

The potential restrictions follow the county's recent self-imposed closure of bars and a newly instituted 10 p.m. curfew for local eateries.

On Friday, lifeguard officials from Encinitas and Del Mar reported beach population estimates were on par with or greater than populations from years past.

Not all beachgoers were maintaining social distance and he called the beach population a "mixed bag" of those remaining socially distant and those who were not.

RELATED: Cities in Los Angeles County crack down on mask violations with fines

RELATED: What is the state 'watch list' and what happens if San Diego goes on it?