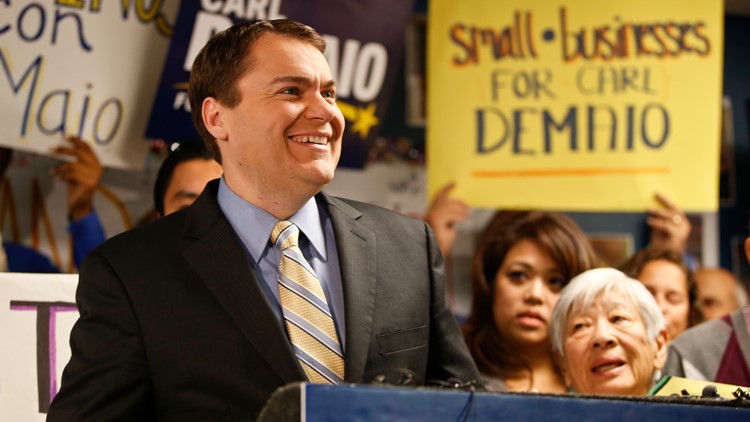 Photo by: AP
Republican congressional candidate in the 52nd district, Carl DeMaio, talks about the his campaign while addressing the media with his final thoughts on election eve Monday, Nov. 3, 2014, in San Diego. (AP Photo/Lenny Ignelzi)

SAN DIEGO — To run for Congress or to not? That is the question Carl DeMaio will answer during a press conference in Escondido on Monday.

DeMaio on Friday announced his expected announcement on whether or not he will run for California’s 50th Congressional seat, which is currently held by indicted Rep. Duncan Hunter.

Hunter, 42, is accused of spending campaign funds on personal expenses. Prosecutors allege he and his wife Margaret went on expensive family trips and made scores of other improper personal purchases over the course of six years.

Last month, a federal judge Monday denied Hunter's requests to dismiss a 60-count indictment that accuses the congressman of misusing $250,000 in campaign funds and to have prosecutors on the case recused due to alleged political bias.

If Hunter vacates his seat or is removed from it, a special election primary would be held.

According to DeMaio, Republican officials and community leaders in the 50th Congressional district have urged him to run for the seat.

“Too many Californians are thinking of fleeing our state because they cannot afford the cost of living and disagree with the extreme socialist agenda being advanced by the Democrats. I refuse to flee – I plan to fight. To take back our state, we need a new generation of California leaders who are willing to fight and have a record of getting reform done. The old guard of California Republican leaders have shown they aren’t willing or able to lead the fight to take back our state from the Democrats – or worse, like Mr. Hunter, they are tied up in court facing criminal charges. Can I best help lead the fight by winning this US Congressional seat or by remaining on the airwaves and chairing Reform California? I’m grateful to all who have reached out to me with their input and words of encouragement on this important question, and I'll explain my decision Monday.”

In 2014, DeMaio lost his Congressional race against Scott Peters and in 2012 he lost San Diego’s mayoral race to Bob Filner.

In 2018, DeMaio - who has been a long-time taxpayer advocate - led the "Yes On 6" movement in an effort to repeal California's gas tax.

If DeMaio enters the race for California’s 50th Congressional district, it could potentially help lock down the seat for Republicans.

Hunter’s 2018 Democratic challenger, Ammar Campa-Najjar, announced earlier this year that he would once again run to unseat the troubled Congressman.