'You want to be hateful? Stay home': Coalition calls for peace ahead of planned Saturday dueling protests

Portland's mayor spoke at a rally with other city leaders ahead of the event Saturday, which is expected to bring out right-wing groups and anti-fascist protesters. 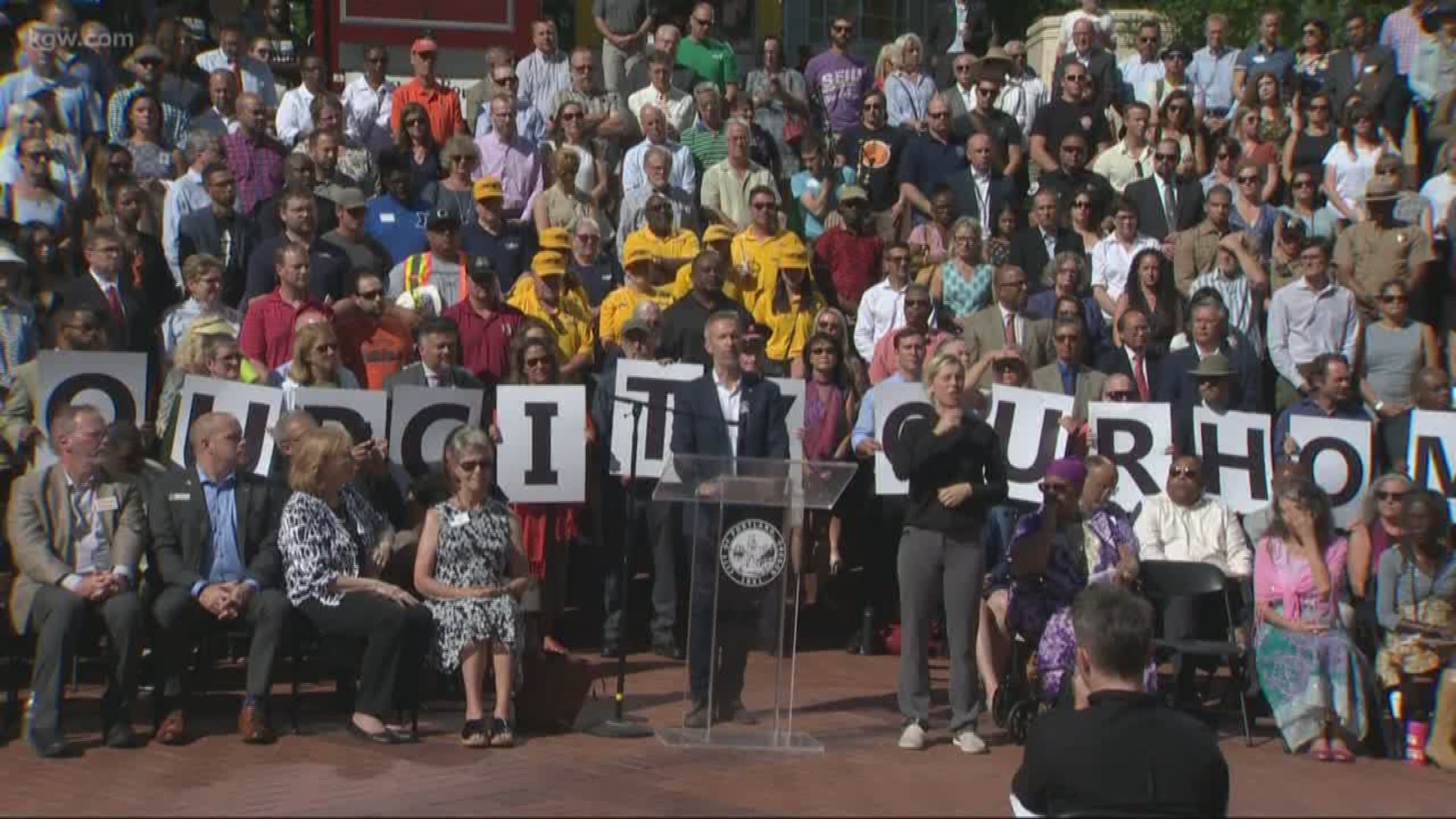 PORTLAND, Ore. — Standing in front of a crowd that filled the brick steps along the west side of Pioneer Courthouse Square, Portland Mayor Ted Wheeler doubled down on his message to out-of-state organizers, planning a protest here Saturday.

“To those who perpetrate racism, sexism and bigotry, you are not welcome here,” he said late Wednesday morning.

The Mayor’s office, which released a video last week with a similar tone, had dubbed the event a “community coalition to denounce violence.”

He was followed up by fellow city commissioners Amanda Fritz and Jo Ann Hardesty.

“I’m a lifelong Oregonian,” he said to the crowd, dressed in a Timbers jersey. “And this is my city.”

Those in the front row held signs that one letter at a time, read “OUR CITY OUR HOME.”

“And I want to speak directly to the white supremacists who are listening and paying attention,” said Hardesty. “This is not your city. You want to be hateful, stay home! Stay home! Do not get on a plane, get on a bus and come to Portland.”

City leaders are getting out in front of this protest, in part, because the organizer is flying across the country to make this happen.

A right-wing activist from Florida, he’s made a Facebook event page titled “End Domestic Terrorism” where he writes he wants to travel to Portland to confront Antifa and he encourages others to do the same.

One reason, he noted, was anger over a fight involving conservative writer Andy Ngo.

Jim Ryan of the Oregonian was rolling at a protest last month, as leftist protesters punched Ngo and pelted him with liquids.

The video went viral, and supporters on the far-right are angry.

Police Chief Danielle Outlaw also noted there are other reasons to be concerned about a higher propensity for violence this weekend, including national outrage over recent mass shootings in Dayton and El Paso, the declaration of an armed man at an El Paso immigration center that he’s coming to Portland for this protest.

“I would hope that we are planning for a day of peace a day of advocacy and a day of again of unity here in the city of Portland,” she noted. “Of course we're prepared for the worst, but that's not what I'm projecting and that’s not what we're hoping for.”

She confirmed Wednesday to reporters she has tapped “all available” police officers to work Saturday, adding she couldn’t say exactly how many were available.

The Bureau employs more than 900.

She added federal and state law enforcement agencies have offered their assistance, too.

“We know we are well supported, and we will have the resources we need to manage these events,” she told the crowd.

Close to twenty speakers took the mic Wednesday, including Rabbi Debra Kolodny of Portland United Against Hate who, like others, called for peace but also drew a hard line between the two sides expected Saturday.

“Creating false equivalencies between violent white nationalists and those willing to defend our city against their violence is unacceptable,” she said.

Supporters of both sides were in the crowd.

Some heckled during speeches.

Olivia Katbi Smith of the Democratic Socialists of America held a sign that said “Your silence will not protect you.”

“It was a really confusing message that they were sending because they had talked about all these other times that they had marched for their rights, and to say that this time we shouldn't, it's confusing, and it's dangerous,” she said of the variation among speakers.

“Ted Wheeler's not speaking out against the actual problem, which is, it's inhumane, and it's on the left,” said Haley Adams, a far-right activist and organizer of recent #HimToo rallies. “My people are always at these events, and we are continuously attacked.”