Dylan Michael Conroy even has his own business card that says 'Leave no can behind.' 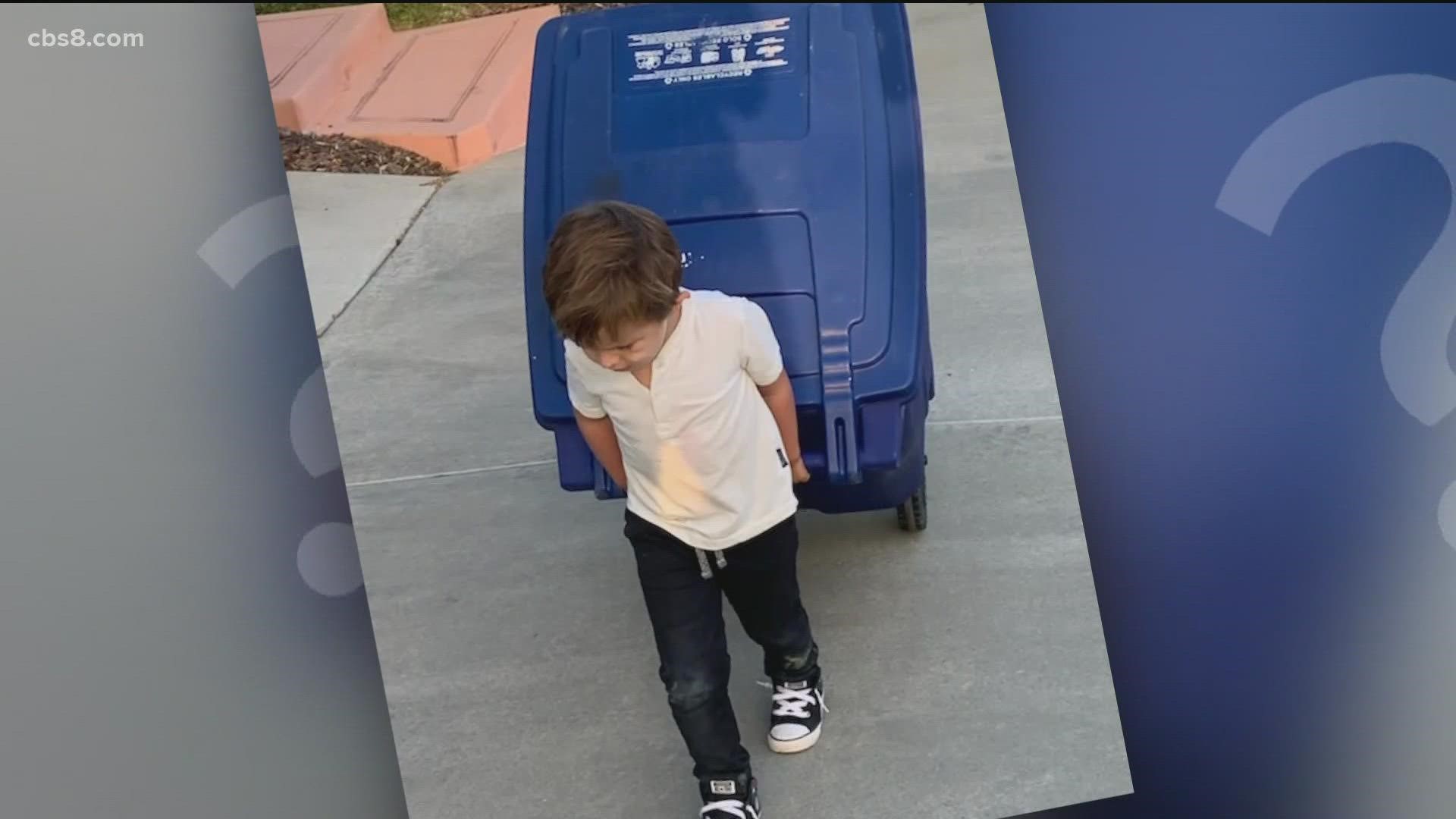 SAN DIEGO COUNTY, Calif. — DMC Disposal may not be a household name yet, but all great things have small beginnings. In this Zevely Zone, Jeff is in San Marcos to meet Dylan Michael Conroy.

These towering trash cans aren't moving themselves. On Rocky Point Way in San Marcos, they're powered by little man muscles. Trash day is a workday for a San Marcos 3-year-old. I asked Dylan if the trash cans were heavy. "Yeah, they are super heavy," said Dylan while working up a sweat.

"I'm three years old," Dylan announced with pride. Old enough to be working for the man and all his neighbors.

Dylan's grandmother, Annie, told us her grandson's trash fascination started when he was one. Trash truck birthday parties, trash truck cakes followed. Eventually a curbside business was formed. Dylan moves the trash cans for his neighbors wearing a shirt that reads 'DMC at your Disposal'.

Annie showed me their accounts receivable chalk board. "So, we will go and write down who has paid him today," said Annie. She is the bookkeeper. "He's the muscle," said Annie with a twinkle in her eye.

Week after week, someone was mysteriously moving neighbor Jon Shaw's garbage cans on trash day. "So, I said well, I am going to start paying him for doing it so I said a dollar a can and that's how it all took off," said Jon Shaw.

Another customer and neighbor Dave White told us, "When I was young, we'd wait to see a firetruck go by and that would excite us for him it's the EDCO garbage truck and when he's out here he is like a general in charge."

Dylan even has his own business card that says 'Leave no can behind.' "He is our budding neighborhood entrepreneur," said Dave White.

"I can't wait until Dylan is old enough and start washing car," said the neighbor across the street, Bob O'Heir.

Something tells me Dylan will be cleaning up in one way or another. Neighbors hand him his wages in small envelopes. "What's in here? Money!" shouted Dylan. Where does all that cash go? "In my pig bank," said Dylan.

Dylan isn't one to talk trash, but if you're wondering how a three-year-old can be strong enough to move trash cans. "Hulk strong, grrr," yelled Dylan.

"He loves the power," said Annie.

It just so happens; Dylan has a superpower. "Grrr, Hulk strong!!" yelled Dylan.

The three-year-old dressed up as The Incredible Hulk for Halloween and owns many Hulk Toys. He's a strong boy with an even stronger work ethic.

Dylan has saved almost two hundred dollars so far and bought a toy trash truck for himself with his own money. 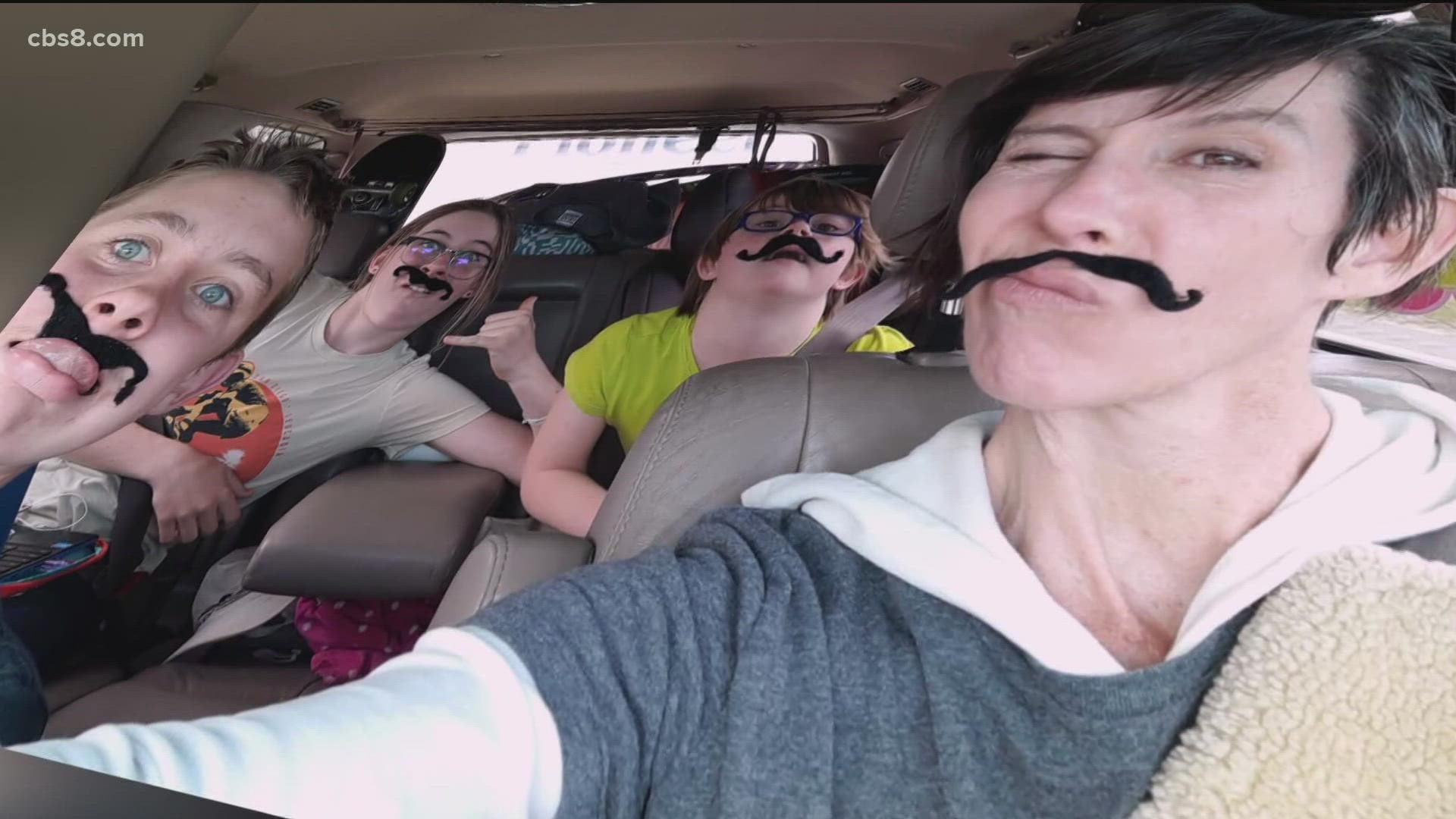 Fallbrook mother celebrates the road trip of a lifetime