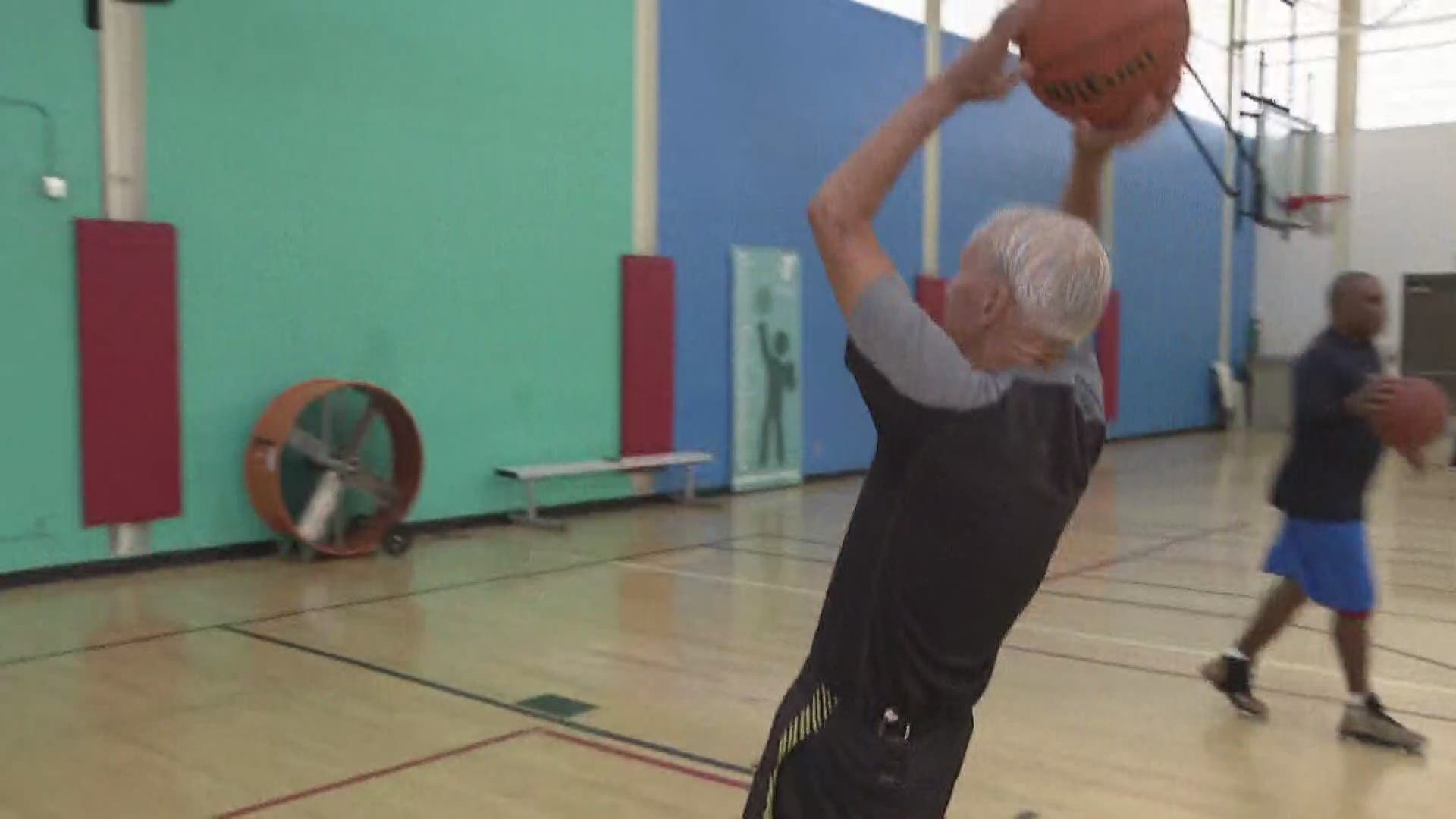 SAN DIEGO — Here is something you don't see everyday: A 90-year-old hoop star. In this Zevely Zone, I went to the Mission Valley YMCA to play half court with a man who has lived a full life.

"Is this when you cross me over?" I asked.  I am on the court trying to guard Lee Tucker who turns 90 years old in November.  "Oh, I can do that. Ha, ha, ha," said Tucker. Lee may be turning 90, but at the Mission Valley YMCA, he is just one of the boys.  As I interviewed Lee, another basketball player 40 years younger than him playfully crashed into him. "They don't cut you any slack at all do they," I asked.  Lee responded, "No they don't."

Bill Walton would approve of Lee's rebounding and quick outlet pass.  But on offense? His shot which is a turn and launch it up there isn't exactly text book. "Let's talk a little bit about your shooting style. Not exactly fundamental is it?" I asked.  Lee says at 5 foot 10, he always struggled to get his shot off.  "I was small so I just started shooting from way up above,"  said Lee.  To which I said, "It's a one hand huck.  What do you think John Wooden would say about that style?" Lee waited a moment and then said, "No. None of that."

We headed out on the court for a game of three on three.  "I'm open, I'm open," said Lee who then caught and launched a shot that clanked off the rim.  "Ohhh. I'm going to give you that shot all day long until you make it," I said with a little trash talk.

What Lee lacks on offense, he makes up for with a bruising defense. "Did you get that? Did you get that steal?" he asked as he swiped a ball away from his opponents.   Don't even think about taking him to the rim. "You pulled my jersey," I yelled.  "Yep," said Lee.  A bit incredulous, I said,  "Whoa, did you just grab my jersey? He's grabbing me ref, ha, ha. And you fouled me."  Lee looked me right in the eye and said, "I fouled you. That's my game. That is my game right there." Then he won the game.  "When you get to be 90-years old that is how you play. Ha, ha," said Lee.

"He's got sharp elbows, you were in there a little bit he has sharp elbows and he hold a little bit he's from Wisconsin they play dirty back there," said Richard Paff, who told me Lee grew up playing basketball in a blue collar town. Lee has been bringing his lunch pail game to the Mission Valley YMCA for 15 years and asked me why I don't play more often. "Basketball was my first love, but when I got into my 30's I thought I was too old to play so I gave it up," I said. "When are you too old to play basketball?"  Lee answered, "When you are 91, ha, ha."

Before this article ends, I want to point out that Lee Tucker used to be a firefighter and apparently he can get as hot as Jerry West.  When we asked for video of his unorthodox shot, he hit four in a row!!  I screamed, "Somebody put some water on this guy he's on fire!! I'm not worthy."

San Diego has been Lee Tucker's home for since 1974. He's been married to his wife Joyce for 34 years.