On this story, he brought the camera along with him to shoot a story about his recent diagnosis of skin cancer found on his back. 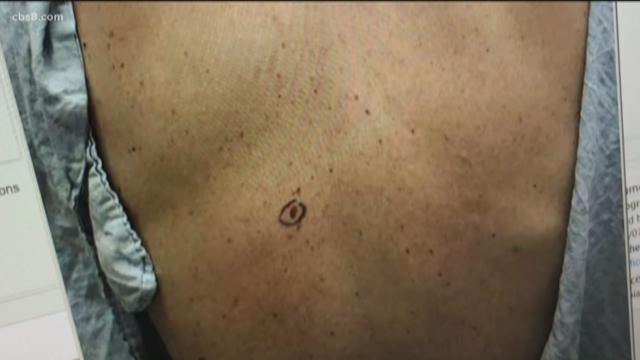 SAN DIEGO — Jeff has a feature segment called the Zevely Zone on CBS 8 and the CW San Diego.

On this story, he brought the camera along with him to shoot a story about his recent diagnosis of skin cancer found on his back.

Jeff had a small mole that was identified as melanoma, a deadly form of skin cancer.

A few months ago, Jeff's wife Heather, a registered nurse at Kaiser Permanente, noticed an odd-looking nub on Jeff's neck. She told Jeff to grab his cell phone.

Heather said, "it doesn't get any easier than this, just take your phone, take a selfie and email it to your primary care doctor." Jeff did.

The doctor said "that looks suspicious" and wanted Jeff to see a dermatologist. Jeff then went to the dermatologist. He said it was just a wart and froze it off in a second but when he scanned Jeff's entire body he said 'now, this looks suspicious.' They did a biopsy, turns out it's skin cancer - melanoma, it's life-threatening, and it's got to go.

"So, you cut deep enough that it goes away?" Jeff asked.

Houser responded, "We are going to get more than enough tissue."

The good news is they caught it early, the melanoma mole was diagnosed as Stage 0. It's in one spot they are going to get it out. It's hard to say when the cancer would have become deadly, but Jeff was told that had he let a few months or even a year pass it would have been trouble.

"It is fast growing. We don't want to take chances, right? Because once it does spread, and metastasizes that's all bad," said Houser.

Like so many San Diegans, Jeff grew up in the sun - fishing, surfing and playing beach volleyball.

Jeff wants to spread this message to every San Diegan: "All of you, go get screened."

Doctors recommend people get screened at least once a year by a primary care physician. If the doctor sees something troubling, you can be referred to a dermatologist. If you have a family history of skin cancer, you might consider getting checked more often.

Turns out, Jeff was unaware skin cancer runs in his family on both sides of his family tree.

A stands for Asymmetry.

B stands for irregular Borders.

D stands for a Diameter larger than a pencil eraser.

E stands for Evolution, which means is your mole is changing? In other words, you are looking for what is called the "ugly duckling" mole.

"I think the first thing he saw was the ugly duckling sign. The fact that one mole looked different from all the others," said Dr. Chuck Miller, Assistant Medical Director for Kaiser Permanente San Diego.

Dr. Miller is speaking about the dermatologist who spotted Jeff's melanoma and ordered the biopsy.

Remember, all of this would not have happened if Jeff had not taken a selfie of the wart and undergone the scan of his entire body.

Dr. Miller created the Teledermatology Program at Kaiser Permanente ten years ago. The average national wait time to see a dermatologist is between 35 and 45 days, but cell phones are cutting the wait time at Kaiser.

"I was told I had melanoma on one day and I was getting it removed on the next," said Jeff.

"That's great, that makes me feel great because that is exactly what we want to hear happen," responded Dr. Miller.

Jeff then thanked Dr. Miller for the selfie program that saved his life, but Miller told Jeff to drive straight home and thank his wife.

That's just what Jeff did.

For more information on how to protect yourself against skin cancer go to, Skin Cancer Information.