The driver of the bus is radio DJ John Fox, from Rez Radio 91.3 FM who may be wearing a brand-new tie-dyed shirt but his musical tastes are still stuck in the 1960s 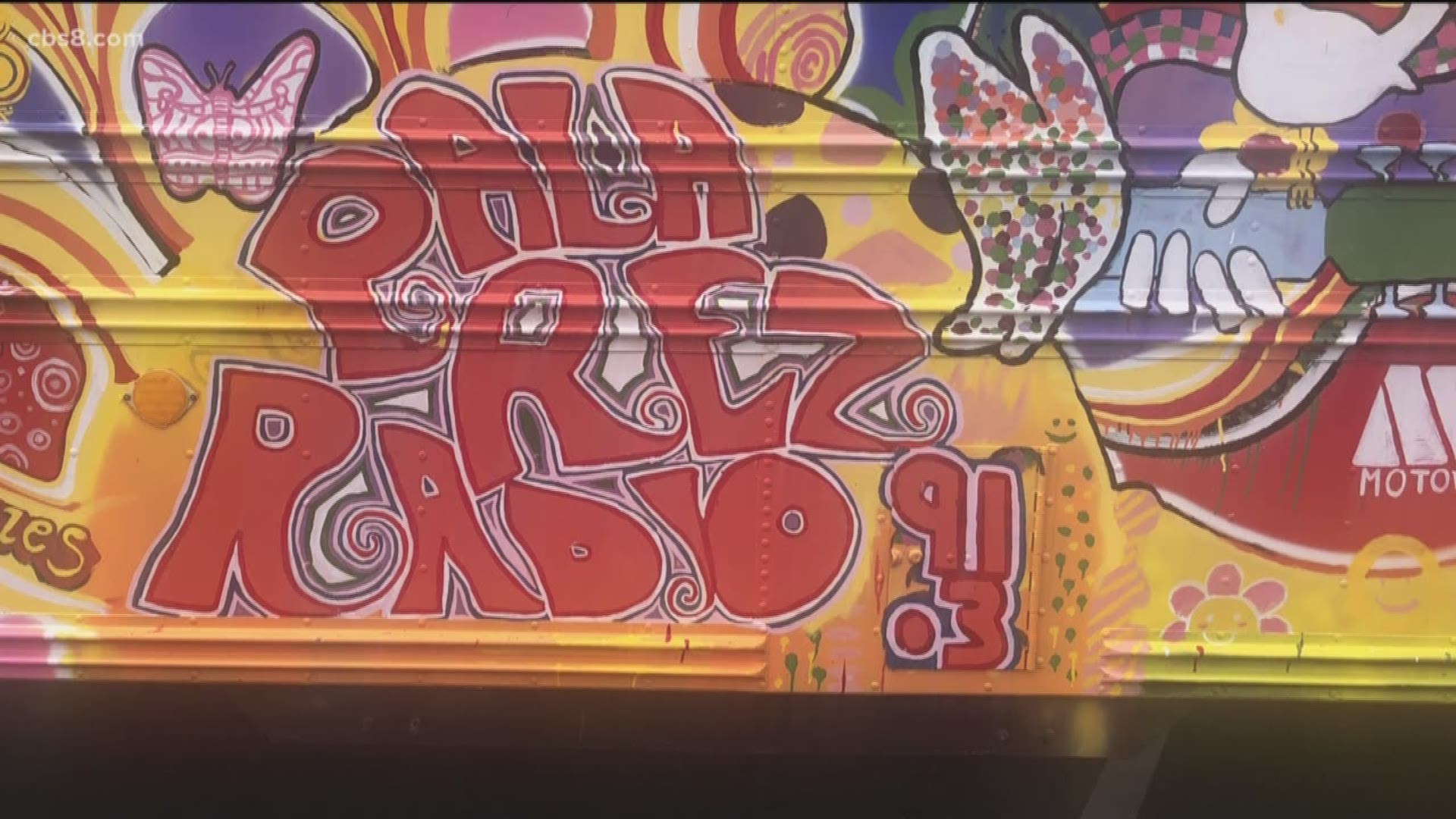 SAN DIEGO — Just in time for the 50th anniversary of Woodstock, an old school bus is making a groovy appearance in the North County. Jeff Zevely from the Zevely Zone hitched a ride on the hippie bus at the Pala Reservation.

It's a vision of love and peace when you see the love child bus rumbling down the road. The driver of the bus is radio DJ John Fox, from Rez Radio 91.3 FM who may be wearing a brand-new tie-dyed shirt but his musical tastes are still stuck in the 1960s.

"I don't think they had a Polo, collared tie-dyed shirt back in the day," said Fox who described the bands he still likes. "Grateful Dead, Beatles, Stones, Cream, all of the British Bands."

According to tribal member, Eric Ortega, the Bonsall School District was going to scrap the old bus.

So, the rusting ride was donated to the Pala Band of Mission Indians and painted by an art class from Fallbrook High School. Fallbrook High AP art teacher Bill Richardson and DJ John Fox planned for the re-vamping of the bus together.

"I gave them an A," said Richardson of the work his students did on the bus.

Student Nayelia Vazquez, painted the names of famous bands from the '60s on the bus.Holly Salyards painted a yellow submarine because: "It was a very peaceful and flowy time like everyone was about love and peace." There are other images on the bus of people like Jimi Hendrix.

"Right here, I did it with black with spray paint," said 18-year old Caiden Metts who had to dig deep into hippie history. "I mean, you have to learn what their mindset was back then, you know, to really get what they [were] like and what they were listening to," said Metts.

Caiden was born in 2000, so we asked his mother Ashlie what Woodstock was really like.

The bus was named Caiden's Daisy in honor of the main artist Caiden Metts.

A spin around the block ends with John Fox announcing, "Children we have arrived at Nirvana."

The radio station sent out a news release with extra details about the station that reads:

The idea came about when Rez Radio changed its call letters early last year to the San Diego heritage call sign, KPRI – now standing for Kupa Pala Rez Indians. That brought forward a number of people from the air staff of the original KPRI in San Diego when the station first tried free-form FM programming in 1967-68.  Much of that music is still a core element of Rez Radio's programming. Fallbrook is the second oldest high school district in San Diego County, dating back to 1893.